THIS match actually had some upset potential, and it's one of the few that I was actually on board with. After all, Frog had managed to drop an unprecedented advantage AGAIN to Axel, had to rely on massive cheating just to advance in the next round, and promptly got his toady rump squished by Scorpion. KOS-MOS, for her part, had looked pretty good in the previous contests - a big overperformance on Aeris and a solid finish last year among them. Big-breasted android girl over the talking Frog seemed like a pretty good upset pick (especially for those who were tired of being burned by Kossy <_<).

Still, there were some warning signs. Had it not been for Blizzard splitting between Diablo and Arthas, either one would have likely beaten KOS-MOS last year. And really, who wanted to pick against Frog in a close match AGAIN?

Well, the match started, and everything was going according to perceptions save for one thing - the picture. There was NO picture in the match, and with it the whole of KOSland cried foul. This wasn't fair, stripping KOS-MOS of her biggest asset - both figuratively and literally!

Well, a lot of complaining and "CURSE YOU BACON"s later, the picture went up, and everyone held their breath. And for one update, it looked like the KOS-MOS adherents would be vindicated - she surged Frog to a stall. But after that it was back to business as usual, with the only competitor who even appeared to be performing marginally better being the random piece of fodder in this match. Uh... good pic for him/her/it, I guess. Frog and KOS-MOS seemed to be benefiting equally, with the only character actually hurt being our laughing stock of near-elites Ganondorf.

This match ended up with only a few notable things left from it. Firstly, Ganondorf actually did well for himself relative to match expectations, even with his post-picture drop he was able to wallop these day chumps when the sun rose.

(good thing for him, because that was the last we'd be seeing Ganondorf look anything remotely close to "good" this contest)

Secondly, KOS-MOS's best days were clearly behind her, and even though I was more hoping that she was going to get a picture more along the lines of what she got against Aeris in 2k6 (shameless [1] plug), she'd almost have certainly lost regardless, and she didn't do too shabby in the overall scheme of the match. The interesting thing to see was Frog - the day vote, his bane against Master Chief, Axel, and even Liquid Snake didn't really do much harm to him. KOS-MOS isn't exactly a day champ, but to see her do NOTHING against Frog when the sun rose was very odd. It was the first sign that CT had perhaps slowed, stalled, or even perhaps reversed that downward slide we had seen from it over the past three years. 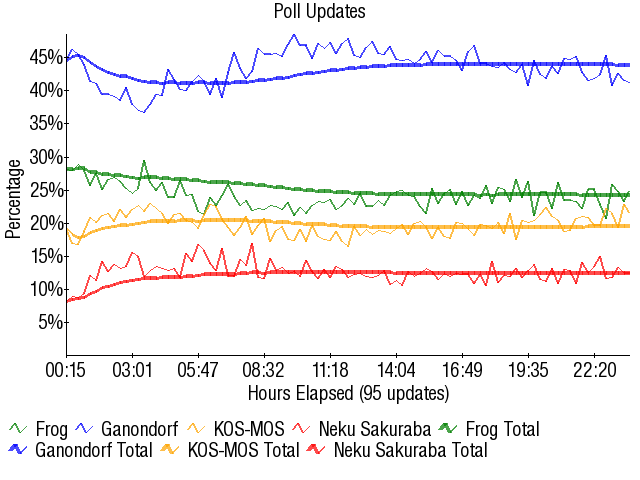 For tonight we've got one heavy hitter, almost-fodders, and one mid-ranger fodder (most likely). There's plenty to be excited about here IMO, so let's hop right to it!

When we last saw our heroes...

To start, Ganon's head and heels above the competition and shouldn't be challenged here. Even so, how he does could be another of those pretty good barometers for where Nintendo stands currently, much like Samus provided today. It won't be quite as pure since I think Frog works at least somewhat like a Nintendo character himself, but is still something to watch out for. Neku should also be worth keeping an eye on- we've already seen one TWEWY character in action, but he got about the worst draw this side of Geno in having to contend with a Kingdom Hearts character all day long, so I wouldn't put much faith in his final value; today should give us a much more accurate estimate of whether or not TWEWY is worth anything in these Contests.

But of course the real heart of the meat is Frog/KOS. As I see it, Frog has two things working for him and two working against him. The two against him are that Neku is a fellow Square RPG character (this probably won't matter too much in the long run through- they're separated by so many years and console generations that I can't see there being a huge overlap like there apparently was with KH) and, much more importantly, he always seems to play down to the level of his competition. As much as we love to glorify Frog and blast his Theme as he pulls out close matches, I think we tend to forget that those matches were only close due to him choking relative to expectations. Axel, Master Chief, Liquid Snake... well alright, so he did rise to a challenge once against Snake, but between Solid *^&$ and rally power and whatever other crazy stuff was going on at the time, I don't know how much stock we should put in it. So, its entirely possible that he allows KM to hang in this match much longer than he ought to.

The two points in Frog's favor here, however, easily outweigh those two negatives in my estimation. The first is that if you're going to beat Frog, you need to have a very strong Day Vote and/or ASV. KOS-MOS is unfortunately lined up perfectly the opposite in her trends- she's good at the start of matches and through the overnight, but wilts when the sun rises and doesn't do any ASV damage. With Chrono Trigger being such a powerhouse in the first three hours, I'm having trouble seeing her be able to take the lead at any point during this poll. And the second point is of course that Frog doesn't lose close matches. If you want to come away with the win you better have built up a 500 vote lead by the final half hour, because otherwise this Board will do everything in their power to keep the comeback tradition alive.

Oh, and I guess there's two other points worth noting as well. In Frog's favor: Chrono Trigger DS. Maybe it hasn't had any kind of impact yet, but even so, it could only mean good things for him as the release date approaches. And in KM's favor: she's going to look really good in this match pic (at least if SB uses the picture Zen submitted for her, and he'd be crazy not to!).

So although I think Frog should be able to survive and advance in this one, I don't exactly see him doing so in style. With that in mind, the numbers in the pot, and after a bit of stirring, we find...

Can't help but be impressed with Frog today. CT another year older, Ganon having SNES appeal, Neku having Square RPG appeal, KOS looking smokin' in the picture, and yet he was never in danger of losing and *gasp* didn't even lay a total egg with the ASV! Has CT:DS made the game somewhat relevant again, or was this just Xenosaga having run out of gas? Hopefully the upcoming Magus match will help clear the picture.

Retrieved from "https://board8.fandom.com/wiki/Frog_vs_Ganondorf_vs_KOS-MOS_vs_Neku_Sakuraba_2008?oldid=63143"
Community content is available under CC-BY-SA unless otherwise noted.