This match, to me, exemplifies everything that is stupid about this format, and why to this day I deride Bacon for running this debacle again. It's not about predicting character popularity. It's not even about predicting fanbase splits. It's about chaos, luck, and the draw of a match picture.

The only thing that was supposed to be debatable about this match was who would come in first. Ocelot seemed like a longshot of longshots when the bracket was released, but with the way MGS had lit the contest on fire, it seemed plausible. And Ocelot was the character that had the MOST to gain from MGS4. He had more screentime than ever, he had more importance than ever, and his role in the finale involves some of the most climactic scenes in all of video gaming. No one had as big a reason to boost than Ocelot. If MGS4 could take Liquid, who was equal to Alucard, to near-Luigi level, what could it do for Ocelot?

The end result is one of the most nonsensical you'll ever see in these contests. As the match started, it quickly became apparent Ocelot wasn't going to beat Kratos - he was barely ahead, and Ocelot has one of the best board votes while Kratos has one of the worst. But something even weirder was going on. Jill wasn't dying. As Ocelot began his percentage fall back down to earth, Jill was right there to catch him. Despite, y'know, having ZERO bracket support from us after she had just lost to Ocelot last year. Pre-MGS4 Ocelot.

From there, it was like last year's match in reverse. After a minor struggle, Jill surged ahead and never lost the advantage, and ReSTALLver Lossalot was never in the match from there on. As evidenced by last year, the two had almost exactly the same trends, thus leaving no room for a comeback on either end. We probably should see Jill/Ocelot 1v1 next year, just for the hilarity of seeing two characters deadlocked for 24 hours.

It was strange retribution, in a way. One year ago, Jill was in the heavily favored position, after having nearly upset Jokefodder while Ocelot blew it against Pac-Man. Ocelot basically took that match from the start and never let go. So the board ends up switching to Ocelot en masse this year, and what happens? Exact opposite. Also, because it can't really be said enough - Metal Gear Solid 4.

So, what happened? Well, for starters, Ocelot is referred to as "Liquid" for pretty much all of MGS4 - which explains Liquid's boost, but apparently voters are either against the concept of a 2 for 1 or somehow were able to play through the game without eyes. I mean, c'mon, it's Liquid Ocelot. Jill was also the beneficiary of some nice STF - not TJF, but Sore Thumb Factor: her baby blue background and cute artwork really stood out in a sea of testosterone (whoa there Heavy). And, of course, having Kratos as the big man in the match is a lot different than having Cloud breathing down everyone's neck.

But let's get serious here. Even with all that, Ocelot shouldn't even have had a chance to lose the match. He'd already won. He had the biggest game of his career. Any excuses were just that - Jill winning here was just nonsense, and while it was nice for her to finally pull an upset after so many near-misses, it just proves how pointless this format is. This would be evidenced in even more bittersweet fashion in later rounds, but this is what exemplifies it the most, I feel.

After Ocelot's bomb, though, along with Snake underperforming, Raiden doing only so-so and Big Boss' performance being attributed to the picture, all eyes suddenly turned to Liquid, the odd man out. Was the first round miracle against Luigi a fluke? Was Snake's twin set for another Round 2 epic bombing?

We left the first round on that apprehensive note - but thankfully, ZackFAQs was waiting for us! 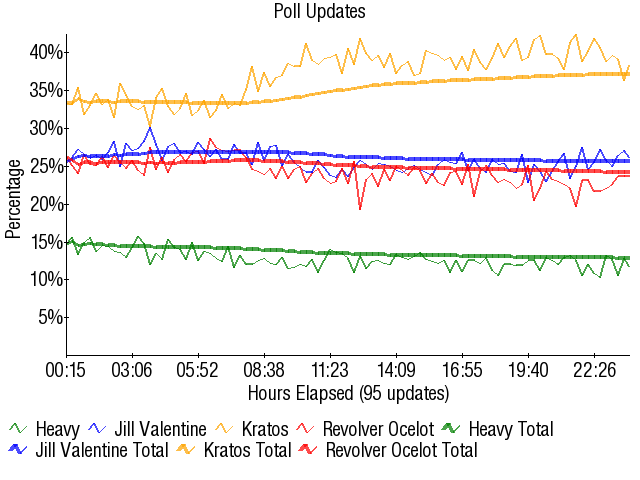 This match more or less exemplified the one major gripe with the new format: results that make absolutely no goddamn sense.

Coming into this match, the only real debate was about Jill vs. Ocelot. Kratos was the obvious victor, barring some form of Ocelot miracle, and Heavy was more or less confirmed cannon fodder. The two faced off last year, Ocelot squeezing out a win against Ms. Valentine. Though, one could argue that this was merely a case of the Metal Gear Solid fanbase being more hardcore than the Resident Evil fanbase, so arguments in Jill's favor weren't hard to come by.

... This was until Liquid Snake kept up with Luigi and Big Boss curb-stomped Kirby. Two of the weaker characters to come out of Metal Gear, weaker or on par with even Ocelot, had excelled in their round one matches, most likely due to a heavy boost from Metal Gear Solid 4. Everything was going to plan, and the Oracles weren't shy about showing their support for Ocelot.

And when the match began, Ocelot took the lead against Jill...

Jill would soon take the lead, and the best Ocelot could do was stall her. Jill barely made any gains, but Ocelot barely made any sizable cuts. Ocelot got crushed in the day, like MGS characters should, and Kratos rose to heaven... or Olympus... whatever. The Jill/Ocelot stall-fest would end how it "began": With Jill in the lead and everyone cursing Ocelot's name.

Now, I could end this summary here, but I just have one, simple question to all you Metal Gear fans, stat heads, and hell, voters.

Metal Gear Solid 4 was supposed to be THE Metal Gear game, and it showed. Pretty much every character with sizable representation in the series got a nice boost just from the game coming out. It's a strong contender for Best Game Ever. And do you know who the principle villain of this game is? Revolver. FUCKING. Ocelot. NOBODY had more of a reason to boost from this game than him. And there was no reason he shouldn't have.

"Oh, but they call him Liquid the whole game!" Hey, that's fine, except that the match picture HAS LIQUID OCELOT. It doesn't matter what you call him, that's HIS PICTURE. IT'S EASY. The guy with Ocelot under his name? HE'S THE ONE YOU WANT TO VOTE FOR. Honestly, this is a poor excuse, and only makes me think less of the MGS fanbase. Tell me, how hard is it to put a name to face, because I think this is a skill that the grand majority of MGS fans lack. Explain Big Boss's constant over-performances as Naked Snake, or how sprite rounds are enough to make Solid Snake himself falter to Frog. It simply makes no sense that Ocelot wouldn't boost just because he had a different name. This was Ocelot's time to shine, and it's a goddamn shame that he could be beaten like this.

On the bright side, he has found a new nickname in his constant disappointments: ReSTALLver LOSSalot. Commit it to memory next contest.

First off Kratos- one of the many very weird performances we witnessed in 2007. The guy looked all-world in demolishing DK twice, but then against it's Donkey Kong, and plus he was assisted by Marth one time and Kirby another. Is his true strength closer to the one we saw in R3, when he was so badly badass-SFFed by Snake that L-Block killed him and Riku nearly matched him? If so he'd better be on his guard, as it wouldn't even take THAT much of an MGS boost for Ocelot to knock him back to earth. Personally I feel we'll be seeing something more along the lines of R2 Kratos though; clearly this is a guy who thrives on the casual vote and the ASV, and he ought to be able to lap it up against these three, none of whom have much casual/TJF/pic factor appeal and all of whom I would peg as Night Vote characters.

Ocelot's the wild card of the group. He impressed me last year by standing up to the FF7/MGS "something fishy factor" better than I had expected against Cloud, so clearly the guy's got a devoted fanbase that's going to be backing him no matter what. The question is how much additional appeal MGS4 can grant him- apparently he's the real star of the game storyline-wise and has a number of really cool cut scenes. That's nice, but frankly I'm not buying into the hype just yet; I don't doubt that plenty of people played all the way through MGS4 to feel the full effect of his awesomeness, but how many of those DIDN'T already vote for him last year? Maybe I'm just being silly in ignoring the apparent boost for this series after what Liquid and Raiden showed us... so heck Ocelot, go ahead and prove me wrong by beating Kratos! I'll reward you by picking Liquid to advance past Bowser if you can pull it off!

I really wanted to pull the trigger on the Jill > Ocelot upset here but just couldn't bring myself to do it... RE5 releasing during the Contest probably would have been enough to tip my hand, but as is I have trouble seeing her improve on her '07 margin against Revolver. That being said, I'd be surprised if he blew her out of the water here, but we've already covered my doubts regarding the MGS4 boost, so moving on to... The Heavy! Well, I expect him to be a decent bit stronger than his partner The Spy just because of his more iconic look and higher playrate, both in TF2 and TFC. Also it should help that he doesn't have to split the PC vote, as Spy did with Arthas. Overall though he probably doesn't have a shot at upsetting Jill unless he starts pulling down the joke vote, which doesn't seem likely- he's just too much of a character for that. Shouldn't have any problem putting up a respectable showing overall though.

So yeah, even though I wouldn't be shocked to see Ocelot pull out to an early lead in this one, and possibly even keep it competitive all through the dead of night, I'm fully expecting Kratos to work those Day Vote muscles of his and turn this into a fairly comfortable win. And if Jill and the Heavy likewise have good turnouts relative to expectations, we'd be looking at

Haha, now that's more like it! Jill over Ocelot in convincing fashion only 12 months after we'd seen Ocelot over Jill in convincing fashion- and this despite all evidence and common sense pointing to the contrary. Results like this are exactly what makes these Contests so enjoyable! I guess there's a couple ways to puzzle this upset out... did the combined FF7 might of Cloud and Zolom suck up so much of the casual vote that Jill was ruined while Ocelot's more hardcore fanbase won out? Did Kratos kill Ocelot by being the bigger PS2/3 star, while Jill escaped by still having RE's GameCube appeal to fall back on? Have we just underestimated the impact of Umbrella Chronicles, and perhaps the series-wide RE boost has more to do with UC than it does RE5 hype? Plenty of questions, so its a good thing Leon and Jill will be involved in very interesting R2 matchups and will hopefully yield some answers.

Retrieved from "https://board8.fandom.com/wiki/Heavy_vs_Jill_Valentine_vs_Kratos_vs_Revolver_Ocelot_2008?oldid=72835"
Community content is available under CC-BY-SA unless otherwise noted.