The difference between that match and this match is what will go down as one of the biggest year-to-year bombs we'll ever see in this contest. One year ago, Master Chief was incredible. We saw a character who many had losing to YUNA in the first round come within 2% of beating SOLID SNAKE and making the finals last year. This year, while perhaps not in position to improve on that - beating a powered up Snake was likely not in the cards - he would certainly have a shot to take down the most vulnerable Noble Niner out there, Sonic. MC > Sonic was a ridiculously sexy upset pick, and the Oracle expectations said it all. With one of last year's biggest disappointments in Raiden, an untested FF4 character sure to be weaker than Cecil and another random piece of fodder (btw Layton's pic is HILARIOUS to me), Chief was going to bring the pain in a big way.

So when he started this match under 35%, it really kind of floored people. Raiden, who had spent all day holding off SAM FISHER from completing a comeback, was way too close for comfort on the green machine. That wouldn't have been so bad - people were half-expecting MGS4 to do anything for its characters at this point - but KAIN HIGHWIND was keeping it close to both of them. Yeah, Kain, from the game whose main character had just gotten done getting fodderized by Zack and Wario, was keeping over the 25% mark. A good day vote wasn't enough to save Chief from this debacle, and he ended up not even breaking 60% on Kain by the end of it all.

Even now people are still picking up the pieces of Chief's one year stint of stardom, and it falls to us to ask: What Happened? I, personally, have a slightly different take than most. While the advertising blitz and barrage of merchandise and the SFF all really helped Master Chief, this year proved that there is no entity that cannot be possessed by the power of The Bandwagon. And Chief had a whole stockade in his Game Fuel 12 packs, and the hilarity of seeing him go even deeper and deeper combined with the Halo 3 hype to make a perfect storm of MC power. Had L-Block not crashed the party, I firmly believe we could have seen a Chief > Snake upset in the semis, and who knows what happening in the finals.

As of this match, however, Chief had been made deeply mortal, if not mortally wounded. I don't think I could bring myself to pick him over Yuna right now, and him beating Sonic seemed like a pipe dream. No egg the hedgehog could lay would be THAT dismal. 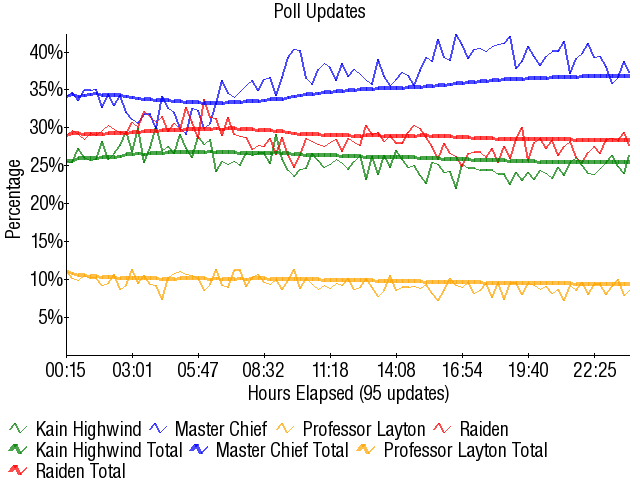 Speaking of Raiden and that (probably not all that MASSIVE) MGS4 boost, let's see where he'd be boosting from!

Even though I don't like MC at all as a character, he's definitely one of the funnest Contest entrants we're ever seen. What joy to see him flop left and right in 1v1s, and on the other hand, what a thrill to watch him suddenly Hulk up to a virtual NNer the minute we switch into 4-ways! I'm expecting another powerhouse showing from the King of the Xbox tonight, although I doubt it ends up being quite as dominating as his R1 from back in '07 just because there won't be any Vercetti to casual SFF. The real question of the day will be Raiden. Is he really as weak as he looked last Summer, or was some of that the result of voters not recognizing him inside all of that toaster armor? If it was just recognition holding him back, then he certainly would be on track for big gains now that everyone interested in the series would have played through MGS4. Even after seeing Liquid and BB look so good, I'm hesitant to get my hopes up too far for Raiden in this one.

If he lets us down for the fourth time in a row though, might he even be in danger of getting knocked out early by Kain? Ehhhh, not really. Yes Square has turned in some good showings to this point, but they've all come from new-school Square, while the older games have failed to impress. Plus he looks like total junk in that match pic. That leaves just Layton. Now just looking over the names of our 128 entrants, I'd certainly have considered the Prof for the position of weakest of the whole pack. But after seeing him in this match pic, I've got to admit that this was a pretty favorable draw for him. He stands out like a sore thumb, is the only non-mature option, and has a funny enough name that he might get some joke support. Plus in a match with MC, you know there's always going to be plenty of anti-votes to go around. All the considered, I'd be surprised if he fell into the single digits in this one.

Alright, so with MC going off on a sizeable blowout, with Raiden comfortably in 2nd and Layton looking perhaps a touch better than expected, that would shake out to about...

Annnd, here we go again! Like Mario and Cloud and Snake and Link etc etc before him, MC comes into this poll a heavy favorite for the win, but leaves with a heavily disappointing victory. Well actually, all the other NN and NN-breakers were just slightly disappointing, so clearly there was something at work here besides just anti-favoriteFAQs. I guess we were foolish to expect MC to remain at his 2007 levels given how hype and recent release-boosted they must have been... but even so, to finish at 37%? Come ON now! Of course the other way to spin this is that MGS4 has turned Raiden into a 4-way monster, which I might put some stock in if not for Kain. I mean honestly, how far above Kefka could any FF4 character be, really? So overall I'm leaning more towards Master Chief just coming way down from 10 months ago- which is awesome considering we're going to be seeing a weakened MC doing battle with an LFF-hurt Big Boss and an LFF-boosted Kirby in a few weeks. Fatal threeway, here we come!

Retrieved from "https://board8.fandom.com/wiki/Kain_Highwind_vs_Master_Chief_vs_Professor_Layton_vs_Raiden_2008?oldid=67859"
Community content is available under CC-BY-SA unless otherwise noted.