It's funny how even when Kefka wins, he loses. The majority of people picked him to get first place, and for a good while he was in first place quite comfortably. He built up a lead near 900 overnight, tapered off a tiny bit in the morning, but then went back up to 900 again during school hours. It sucks when something is called "Summer 2007 Contest" and you're dealing with an ASV.

But even without school, Kefka's day vote is a complete joke. He started collapsing away those 900 votes looooooong before school let out, then the ASV hit and it was the Red Sea collapsing on the Egyptians all over again. At 2:30 PM EST, Kefka was leading by 10 votes.

I know we were dealing with Lettuce Kefka and Gears of War was Halo Lite for a tiny little while on this site, but still. If Tom Nook or Zelos were worth anything, Kefka could have potentially fell all the way down to third place here. Eventually Kefka would get his Dissidia appearance and finally get a boost, plus a match picture worth looking at, which ultimately led to him getting that long-awaited big win. But for years and years, this guy was a massive choke artist and would always get listed with stuff like Halo and Donkey Kong.

Oh and a note on Zelos. I love the Tales series. Really, I do. But can you people PLEASE stop nominating these guys? Only Kratos will ever win anything, and that's only if he's against some slug. Just stop.

nobody really knew what to think of Marcus Fenix. on the one hand, he was the star of the most popular 360 game to date, Gears of War. on the other hand, he was a generic looking, generic sounding character who most people knew as "the Gears of War Guy" than anything else - it was questionable as to if people would even recognize him. it came down to what kind of picture the guy got, or so we thought.

looks up to match pic

oh, he got it all right. and not only that, we got Lettuce Kefka. what happens when Lettuce Kefka -- the worst thing we've ever seen during the daytime -- goes up against Master Chief-lite?

this happens. Kefka did well at the start, building up an 850 vote lead through the poll's first six hours. the morning vote, surprisingly, didn't hurt him at all. all Kefka had to do was hold on during the afterschool vote and he had this match. unlikely, but possible. the during-school vote brought him down into the 600s, but he had stabilized. no one was going anywhere.

the afterschool vote thought differently. in one update, he lost 50 votes. he stabilized a little, then lost 50 more. then he lost 80. then 100. within 70 minutes, he went from being ahead 10 votes to being down 1050. within one hour, we went from a match we were all watching intently to a match everyone was laughing at. some of us looked back a couple hours later and saw Kefka was down 4000 votes. hilarious. Lettuce Kefka strikes again, and Kefka finds a way to outdo his previous disappointments with a collapse for the ages. only the Master Hand/Kuja debacle could match this one.

one last note about this match -- man, Zelos bombed, and bombed hard. some people were talking him up as a second place finisher to Kefka -- the beating was so bad that a couple of delusional folks called SFF with Kefka, despite the fact that Mithos did better against Kefka one-on-one that he did. pretty funny match all around. 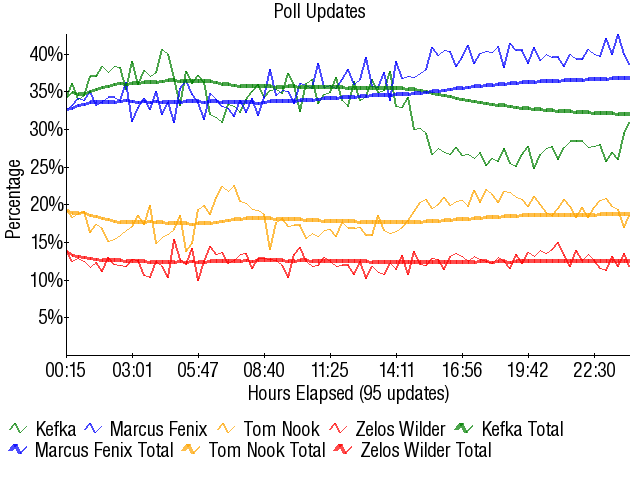 • Previous Match       • Next Match
Retrieved from "https://board8.fandom.com/wiki/Kefka_vs_Marcus_Fenix_vs_Tom_Nook_vs_Zelos_Wilder_2007?oldid=66103"
Community content is available under CC-BY-SA unless otherwise noted.