It's hard to sum the match up beyond a simple "wut", but it doesn't hurt to try.

This match wasn't really talked about at any point until Dante won convincingly over the heavily favored Master Chief. At that point, Sonic's loss to Auron had sparked talk of a potential upset. Though, Sonic performed fairly enough in his round three, so any talk of Sonic losing quickly simmered down, and this match was, once again, considered a gimme.

Nobody seemed to notice the pink ball in the room.

When the match began, Kirby jumped ahead of Sonic in a flash. It was entirely possible that Kirby had a better board vote than the blue blur, so people weren't too worried. In fact, they thought it was funny to see Kirby hold the lead against a noble niner like this. (And they'd get to see it again!) But as the match continued, Kirby just held on to his lead. He would steadily decline as the match went on, and Sonic only started making cuts during the morning vote, but then he just completely lost momentum in the last half, and the straight lines just tell the rest of the story.

Now, you can try and argue that this is a case of some new "bandwagon factor", which would explain a lot of the strange occurances over the past two contests. Would some form of rallying behind Kirby explain Kirby's victory? Sure.

But it does not excuse Sonic's abysmal performance here.

The numbers Sonic put up in this match show him scoring 35% on Sephiroth.

Not a single member of the Noble Nine should be able to get away with failing to break 40% in this day and age without heavy SFF being involved. Whether or not Kirby got a bandwagon going doesn't matter. Sonic put up pathetic numbers against Sephiroth and Dante. Nothing can change that.

This match made me, at least, feel bad about riding Crono and Mega Man for being the weak links of the Noble Nine. When Crono loses, it's to the tenth strongest guy. Mega Man was being SFFd by an elite level opponent. Sonic was fresh out of excuses the second Sandbag exited the contest. Sonic will always return to the field, but God knows how he's going to do now. This was a complete disgrace to his name. 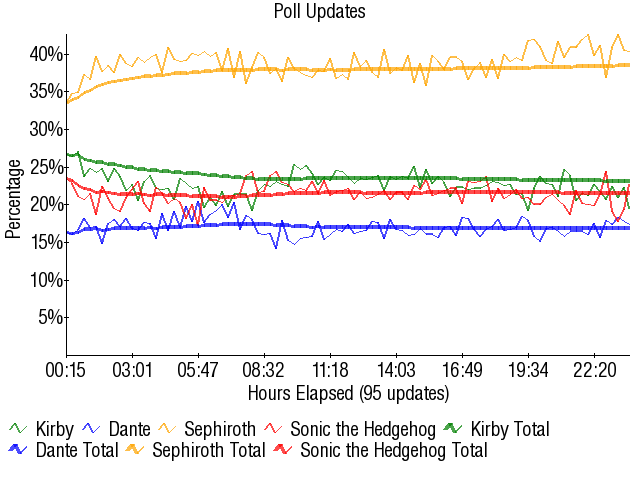 As for what's coming up tonight, eh... I think there's potential here for an interesting result, but I've been forced to lower my hopes due to Sonic looking a little too good last around. Let's see what I mean.

Kirby, you monster! Alright, so obviously that isn't fair considering how Leon was being held way back by Dante while Kirby sat there in an ideal position, but still, it goes to show how dangerous the puffball can be with the right positioning. Meanwhile Seph and Sonic look awful, but that goes back to Kratos not having any reliable performances last season due to L-Block; adjust him up to something more reasonable and Sonic moves right into Kirby's range.

As I mentioned, I was really pumped for this matchup right after Dante knocked MC out of the bracket without breaking a sweat, despite Leon acting as an anchor (presumably) to his strength all day. Plus Kirby had looked fantastic, which got me excited for Kirby being able to make deep cuts into Sonic's Brawl/Nintendo base- possibly enough to let Dante sneak through for the advancement! But then Sonic went and had to ruin everything by scoring 28% in R3. Dang! To be clear, I still think the Blue Blur is in for a major hurting versus last round due to not sticking out like a sore thumb, but he just did too well there to bet against him. Also, he once again looks solid in these pictures whereas nothing from Dante really stands out to me. Also, silver-haired badass SFF? Not sure I entirely buy that, but eh, Dante would need a few more factors working in his favor to pull this off, so regardless I can't see it happening.

So Sonic > Dante... but can he at least top Kirby? I think so! Leon's gone, which should naturally be a huge weight off his shoulders, and now Kirby no longer gets a free ride against mature opponents, so I see him coming back down to a more natural strength. Kirby probably comes last here, but I wouldn't be surprised to see him keep it very close, perhaps with a strong morning vote after Dante creates a decent lead in the dead of the night.

Sonic > Dante > Kirby, pretty close between all three. Is that going to leave any room for Seph to impress? I don't really think so. Sure he looked great in R3, but he's the kind of entrant than can eat PSX/2 action stars like Auron and Kratos up for lunch. I could see him damaging Dante somewhat that way, but Kirby figures to stand up much better against him, and if Sonic brings his A game for the second round in a row it'd be easy to see him stumble into the mid 30s. If instead he amazes us and shoots for 40 once again though, oh well, at least a showing like that would increase Snake's R5 chances!

Sephiroth >> Sonic > Dante >~ Kirby, sounds about right, now let's pot and stir this up quick so I can get back to this PPV!

That looks... like I'm undershooting Seph. Come on big guy, surprise us again!

The other day I called Pikachu > L-Block the most pleased I've been with any result in many years. Well, I stick to that, but Kirby > Sonic is making the Hall of Fame also, as the most hilarious result in a long long while! I wasn't able to check the poll until 15 minutes in, once Lesnar/Couture was over, but my reaction was just to go "what the heck?" ...and then start cracking up. Stat's reactions only made it more funny! I still don't understand how this is possible, but oh well; it sets us up for what could be entirely really absurd result between a weakened Cloud/Seph, a Snake weakened by splitting Brawl, and a Kirby who will once again stand way way out against three mature PSX stars. Oh boy!

Retrieved from "https://board8.fandom.com/wiki/Kirby_vs_Dante_vs_Sephiroth_vs_Sonic_the_Hedgehog_2008?oldid=67875"
Community content is available under CC-BY-SA unless otherwise noted.