As in Round 2, Kirby was the obvious standout among three "mature" characters, and emerged as a clear favorite to advance, while the other spot was pretty much up for grabs.

Kirby came out of the gate on fire, seemingly having gained strength after his first two matches. By the end of the Power Hour, he had built up a lead of over 900 votes, and he coasted to a 5000+ victory.

The other story of this match was Master Chief's continued fall from grace. After his big performance in 2007, the Chief looked vulnerable from the start of this contest, and never managed to regain his former strength. After battling for the first half-hour of the match, he fell behind Dante in the race for second, and was never really in contention after that. Dante crushed Chief during the night and into the morning, and built a lead of over 3300 by the afternoon, before eventually winning by 2900. 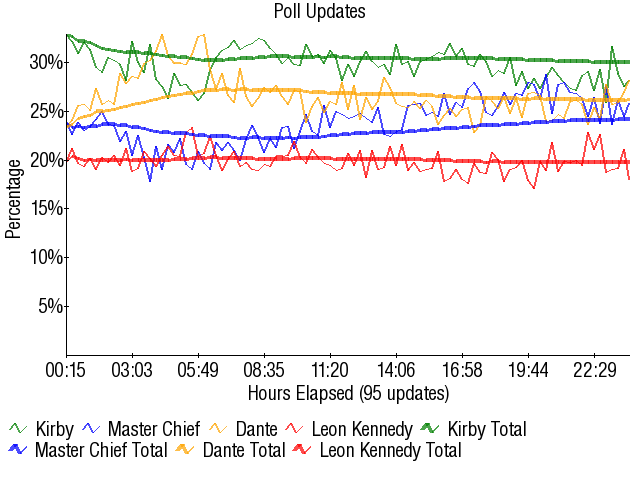 Speaking of sore thumbs, we've got another today! But even better, we've got a great chance to continue that amazing streak of Nintendo overperformances. Can Kirby pull it off?

Whoa, BB sure is a whole different character from the guy we saw in '05 and the start of '07. Adjust for that, and this one goes right back to being a four way pick 'em.

Weak as Master Chief has looked, we know for a fact that Dante and Leon are going to be holding each other back at least somewhat. Set them up for a 1v1 tomorrow and I take Dante easy, and I'd even be sure to take him in a "fair" 4 way situation, but as is those two share the same company, same character design, and leave MC free to run unchecked with the Xbox vote. It shouldn't be a blowout, but I see the Chief being able to advance ahead of Team Capcom, though he might need his ASV to do so.

As for Dante vs Leon, well that's no longer really in question, is it? Mistaaaa Kennedy was fantastic in the opening hours last round but Dante soon righted the ship and proceeded to run away from him for the next 20 hours. REFAQs or not, there's unfortunately just not any reasonable way for Leon not to finish this poll in the basement.

The odd thing is that Leon is going to decide the final result though, in some way. You see much of his strength comes from being the only M-rated major seller from the GameCube's library, and so even though Kirby gets to look all cute and pink against three mature action stars once again, this time around there figures to be at least a little LFF limiting his damage. How much will that matter, though? Probably not a whole ton... Leon beat out Pikachu by 9% back in R2 of last year, after all. Originally I was planning to take MC for the win over Kirby due to the overlap, but with the way Nintendo's been on fire I'm going to back off that "upset" now and continue to support the puffball.

Yeah, so even though all four of these characters are probably very close in natural strength, I don't see any way for this to be the epic 4-way "anyone could win!" battle that would be so awesome to watch. It might LOOK like that during the dead of night, but I've got to imagine and MC and Kirby's strong Days will push them through if it comes to that. But if its still pretty close all the way around, we're talking about like... *pots and stirs and spits*

This is seriously pretty upsetting. I've always despised MC and had hearty laughs at his failures, but after last season I had no choice but to respect him (in this format, at least). So I go out and give him credit for the first time ever, and he thanks me by doing THIS... not only do I get this pick wrong, but it's the mistake that eliminates me from the Guru. Bah!

I mean, losing to Dante would be weird (considering he beat him by 6% last year in a fair, non-Block match), but at least understandable/acceptable post-DMC4. But to never even be in contention against Dante, in a match where he's being limited by Leon, in a match where there's no one to share your Xbox fanbase? That's just flat out pathetic.

Retrieved from "https://board8.fandom.com/wiki/Kirby_vs_Master_Chief_vs_Dante_vs_Leon_Kennedy_2008?oldid=63145"
Community content is available under CC-BY-SA unless otherwise noted.