For the OTHER half of the board, if L-Block wasn't going to be done in Round 2, it would fall a round earlier. Ryu was presumably safe in first, so it was down to the posterboy for Brawl's unbalanced gameplay, Meta Knight, to do it. And in theory, it made sense - Meta Knight beat Peach when he was only a trailer, he was THE most overused character in Brawl, and the piece of fodder in this match - The Dog - was going to put a serious hurt on L, allowing Meta Knight to slip through and slay the contest champ.

Yeah, right. This theory is probably the reason why Ryu lost this match. One day after Amaterasu lifted her hind leg and pissed all over the dreams of Board 8, the Block itself came down the screen and smashed the remains into oblivion. The match itself started ambiguously, but hopefully - L-Block clearly wasn't the same entity that had annihilated Link, Cloud, and Snake last year, it wasn't hitting those numbers against Ryu, Meta Knight, and The Dog. Meta Knight had a very strong opening vote, and if L's trends from last year held, we could see the miracle not never happen, right?

Well, there was a problem. L's trends DIDN'T follow last year's. In fact, even though the first hour was still his best hour, he stayed consistent pretty much all day. And that, combined with Meta's collapse after the first update (which implied he stole Ryu's board vote), and Ryu being a day chump... yeah, you see where I'm going with this. Ryu's morning vote and ASV would be the death of him, as they have in so many years past, while L Block barely seemed phased by either.

And that's what was so scary. It is impossible to overstate this - L was looking, for all intents and purposes, legit this year. And this was all with The Dog presumably leeching its support, a bandwagon yet to come, an Ammy that refused to fold... and really, how was Ryu supposed to beat L next round when he couldn't do it in THIS round?

With that, and looking at the competition and SFF in future rounds, L making the finals seemed a virtual lock. Even the staunchest of holdouts were beginning to anoint it the repeat champ (with all the whining that goes with that). All we had to do was see how the specifics played out. 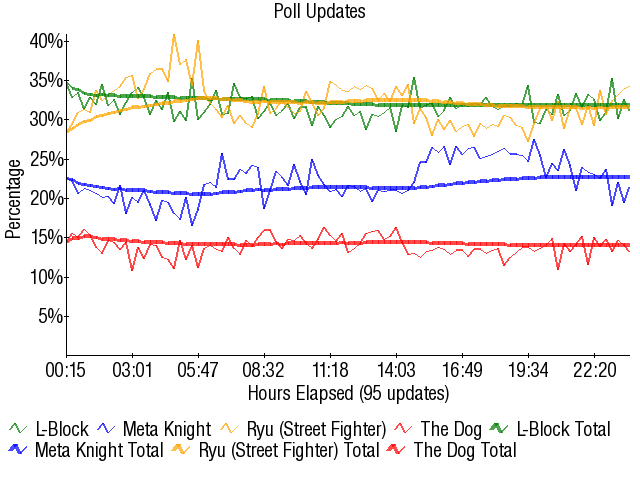 So it begins... the great battle of our time.

For the first time in history, we can honestly say that the most important match of the Contest takes place tomorrow... in the first round. What the wha? Let's jump right in!

The great battle is, in this case, BRAWLFEAR vs JOKEFEAR. Meta Knight's got alot going for him in this one- he was dismissed as "guy from a trailer" last season and some B8ers picked him to not only finish behind Peach, but behind CATS as well. (CATS!) Instead he proved that he's got a loyal Kirby following that stuck behind him and pushed him on to nice showings, even when SSB competition arrived in the form of Fox. He's still got that loyal Kirby backing, he's still got his very appealing character design, and now he's actually BEEN IN SSB as well. Where, just by the by, he's both a casual favorite and the undisputed #1 ranked choice on the pro-level tiers. Whoa! What could stand in the way of so many strong positive points?

Well, his opponent, uh... beat Link last year. Pretty easily. Does that count for anything? The crazy thing is, maybe it doesn't! Even though L ended the season as arguably the biggest powerhouse we've ever seen, he STARTED it not all that far above the fodder line, and had to rely on extremely fortunate bracket placement in order to survive in both round one and round two. Will the L-Block train need a few rounds to gain steam in '08? Will it even gain steam at all, or will the internet at large agree that the joke has grown stale and its time to move on? So many questions regarding JOKEFEAR, with so few answers to this point in the Contest... lucky for us those answers will be arriving in only a couple hours now.

Seems like an epically close battle to this point- but what's this? It appears that SB has introduced a new twist that's going to tip the scales! In a brilliant move on his part, SB has decided to throw a major monkey wrench into L's gears right from the outset: not only are Ryu and Meta strong in their own right, and independent of each other so that both should perform at peak strength, L is also being challenged by a little something called Joke LFF! Could The Dog be L's perfect poison? I contend that it's more likely than you might think. He's an old school character that any gamer from the NES era should recognize, but he's also totally ridiculous and will look look just as out of place in the selection block as any other joke from this season. Plus, he got the perfect match pic! Let's not forget that the last time voters were offered a joke vote alternative to L-Block they jumped ship in droves, rallying ?-Block to a very easy victory over '07 champ- and this on the day when his strength should have been at its all-time height.

(Now, how much of that writeup was honest reasoning versus wishful thinking? You decide!)

When we take all of that wall of text into consideration, convert it into numbers, and cook it up in the big ol' pot, we come out with

Death to the Block, you say? Why that sounds... delicious!

Darn you Bloooock! But let me clear up something from yesterday before we begin: I don't hate joke characters. Really, I don't. Block and the Dog turned this into an exciting match, WCC forcing either Tidus or DK to choke away R2 will be pretty funny, Hogger knocking out Laharl and Ramza will be worth a laugh, and if the Sandman can actually rise up and punch Magus out of the tourney it will be hilariously embarrassing. My problem is that thanks to the nature of the format, these jokes AREN'T jokes anymore- instead of being worth some giggles and small R1 excitement, 4 ways only make them more dangerous as the competition around them becomes more legitimate. And that's just silly. Examples: that great Vincent vs Crono rematch everyone's been looking forward to seeing? Sorry, now its going to be a meaningless fight for third. That epic duel for a spot in the Final between Vincent and Mario? (Where Mario is weakened enough by Link and Samus to be in serious danger.) Yeah, that's been canceled and replaced by an obvious Link/L-Block advancement.

Past the first round these jokes don't make the tournament more fun, they just turn once-interesting matches into clear results thanks to their dull static joke strength. And that's why we need to return to 1v1s in 2009.

Retrieved from "https://board8.fandom.com/wiki/L-Block_vs_Meta_Knight_vs_Ryu_(Street_Fighter)_vs_The_Dog_2008?oldid=67850"
Community content is available under CC-BY-SA unless otherwise noted.