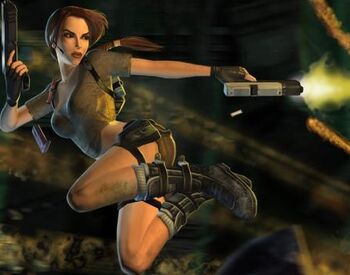 Though Lara Croft began life as a PC adventure game character, she's perhaps even better known for her movie series, where she's portrayed by Angelina Jolie. CountCrazy007 thinks she is quite sexy. Wank-worthy indeed.

Due to her status as an icon (for better or worse) of the video game industry, Lara was awarded a #1 seed in the original Contest, a decision that quickly backfired on CJayC when she was blown out by Crono to the tune of nearly 71%. Though she has returned to the Contest field several times since, each outing has been equally disappointing, including her most recent 55% defeat at the hands of Chun Li in a match she easily could have made competitive.