It even came alarmingly close to percentages of 40/30/20/10, which is just bad. The only interesting thing that happened was Vivi leading for a minute. Not even two dragons in a poll at the same time was interesting here. We couldn't even whine about a picture or laugh at something dumb, because for 23:59:00 nothing happened. I suppose one could stretch this match into proof Vivi was boned next round, but I won't go there.

Not every match can be good in a full contest, I suppose.

there's utterly nothing to say about this match. 40-30-20-10 matches are as boring as you can get, and this was one of the biggest consensuses (is that a word?) that we had. only two things keep this from being in last: a.) it featured two characters of decent strength (one we hadn't seen since 2005), and b.) the Tidus/Pikachu upset the day before made Vivi's performance interesting. Vivi did what was needed, but would it be enough for the much-hyped round 2 matchup? 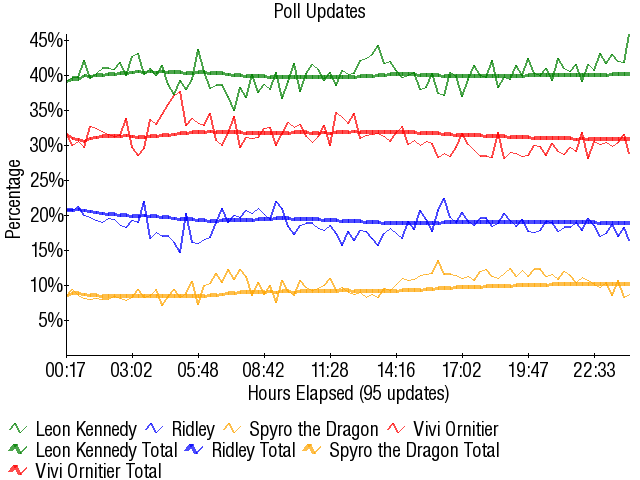 Retrieved from "https://board8.fandom.com/wiki/Leon_Kennedy_vs_Ridley_vs_Spyro_the_Dragon_vs_Vivi_Ornitier_2007?oldid=66199"
Community content is available under CC-BY-SA unless otherwise noted.