This had been one of the more anticipated showdowns... of last year. Dante was the upper midcarder who had never come through when it counted, while Leon was the upstart upper midcarder who had never been given a chance against a character not named Gordon Freeman. But with his great performances against (pre-suck) Mega Man and Bowser, could Leon really give Dante a run?

The answer turned out to be no, but that was sort of lost in the whole "Pikachu killing them both" debacle. Now, with Riku here in pretty much the EXACT same setup, could the KH fan-fave ride a fanbase split to advancing?

Of course, after last round, there was more talk of Leon keeping close to Dante rather than Riku giving him any kind of a run, some ramblings of certain stattrolls aside. Hogger was also briefly mentioned for, I dunno, *maybe* sniffing at third, but most wisely calculated a character that could barely keep pace ahead of Laharl wasn't going to be making any waves here.

Well, the match started - and suddenly, it was like how last year was supposed to have panned out. Leon wasn't just doing better relative to Dante - he was within one vote of him at the freeze. Dante was able to pile all of eleven more votes on that margin after the next update, but Leon went and just took that back and then some in the next to give him a 14 vote LEAD. So, expecting Dante to fire back in the next update, we watch with bated breath... only to see Leon crush and surge to an 83 VOTE LEAD.

All hell had broken loose on the board at this point, as this seemed to be Jill v Ocelot all over again, except instead of reversing a thin margin Leon looked on track to be turning around a legitimate BLOWOUT. But Dante held strong, and made a major cut of his own in the next update. From there it was a combination of Leon spikes and Dante whittling the lead down, and the ups and downs made it one of the more exciting Power Hours we've seen in these things.

Of course, as those who have watched the Power Hours long enough have learned, a close Power Hour usually means a match that doesn't end up that way. And with Leon having the backing of Nintendoland, all of that fell apart once the night came. Dante was really able to put the thing out of reach with the night, and even though Leon recovered somewhat when the day hit... he's still an RE character, and even the most Nintendoey of RE characters are no match for an even semi-casual vote like Dante's.

Still, it's important not to understate exactly how well Leon did in this year's showing against Dante, which also made Pikachu's showing against the two even more perplexing. Riku came to a far third in what was clearly his least impressive contest to date. I guess the most you can say about that is that he did what he did (despite?) looking absolutely bangable in the match picture.

And by that I mean um ignore that last remark hey let's laugh at how bad Hogger bombed hahahaha oh what happened to you Ramza? 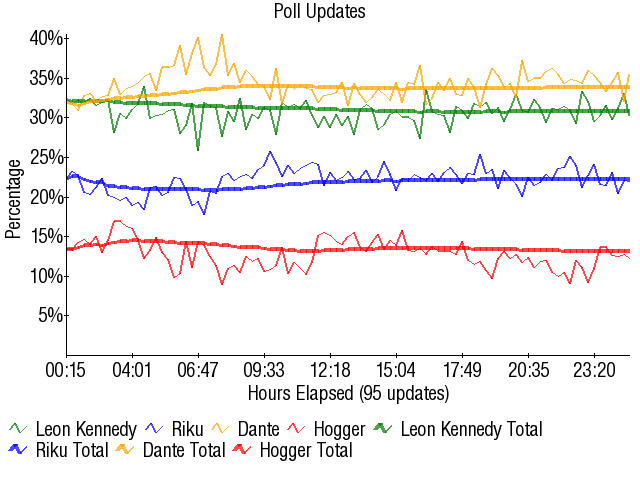 Yuck, what awful stats. There was nothing to base Siegfried or MacMillan on, so the only thing we can really get out of the first match is that Riku REALLY ought to have been able to hang closer with Leon and didn't have an excuse not to. The second result is a little more telling... yes Dante put up over 50%, but Hogger is pretty bad fodder and Laharl and Ramza were destroying each other all day in order to bring themselves down to his level. Surely Dante ought to be a LITTLE higher in the stats than is reflected above, but... probably not all that much higher. Leon had the more jaw-dropping performance of the two, which makes today's battle all the more intriguing.

Let's start with Hogger just to get him out of the way quickly. Positive: he stands way way out in this picture. Negatives: everything else. Yes WoW rallying can have an impact, but as we saw in the Arthas match and other things like Mario/Warcraft, people don't care enough to vote unless the match is close enough where their rally effort is going to have an impact. Hogger is miles below the rest of this pack in natural strength, will never be in contention to place ahead of anyone past the first 15 minutes, and is going to flop mightily vs his R1 showing as a result. Next!

Riku's just incredibly weird. Sora got an awful smoking pic yet still smoked Fox (which as Yoshi proved is no small feat!), then got a solid anime face shot and nearly bested Squall! Clearly KH is riding high in '08... except why then did Roxas and Riku fold like lawnchairs to Liquid and Leon? I have no idea, but despite how good New Square has performed in many spots to this point I just can't justify Dante allowing Riku to make up the 16% he'd need to catch Leon in this round. That being said, I'm going to have to be conservative and give him SOME credit- he's probably going to make up a good majority of that at least.

That leaves us with Leon vs Dante, and it ought to be a no-brainer. After all, we saw this matchup only last year, and Dante put up 30% of the vote to Leon's mere 24%. As to that, I'm going to repeat my initial reaction at the time: "oh jeez, Leon looks AWFUL in that pic!" And he sure did! This time around he's right on par with Dante in terms of "cool factor", and I expect that to be worth plenty between guys so closely related in terms of character design. Also, there's been a sudden unexplainable (Umbrella Chronicles?) new trend called REFAQs taking hold of the site recently. Sure DMC4 sold well, but did anyone really love it? If they did, they sure didn't do a good job of showing it in that Nero match! In summary I'm expecting Leon to have a much better show of it in this matchup, and could perhaps, PERHAPS, even contend for the outright win!

So if I'm keeping Leon pretty close to Dante, who in turn will be pretty close to Riku, who in term will decimate Hogger, we'd be looking at something along the lines of... *gets out his pot and does some stirring*

Well, that was another entertaining match. Really awesome for those first few hours, but I'm surprised Leon wasn't able to use his GameCube (and now Wii as well) fanbase to stick closer with the Day vote. But eh, that's alright, the important thing is how much he improved on last year's showing, which should be enough to prove that was mostly just him looking goofy in the match pic. He won't have that problem in R3 thanks to our B8 artists taking the reigns, and there seems to be some real kind of REFAQs thing going on as well, but... heck, even so I'm not seeing any way for him to catch up to Kirby or the Chief. That's alright; I chalk this up as a strong season for him regardless.

Retrieved from "https://board8.fandom.com/wiki/Leon_Kennedy_vs_Riku_vs_Dante_vs_Hogger_2008?oldid=63139"
Community content is available under CC-BY-SA unless otherwise noted.