Everyone who was here in 2003 remembers the single biggest upset of all time in one of these contests. Link was riding high after his dominance in the Summer 2002 Contest, and virtually everyone had Link winning in 2003 -- so much so that the pre-contest hype was all about predictable and disappointing 2003 would be.

Everyone knows what happens next, as Cloud went on to flatten Link in the Final Four that year. But Link would get his revenge in 2004 as he and Cloud were placed on opposite sides of the path for a predetermined meeting in the final.

It was hardly ever close. Link took off early on, and after a push by Cloud to come back in the poll Link used the morning vote to take off like a bullet en route to avenging his 2003 loss.

So along comes 2005, and CJayC finally concedes that perhaps Clink should be removed from the bracket to make it more fun. He even set up Spring 2005 just so that he could take out Sephiroth as well, and the end result was the post-Summer 2005 Tournament of Champions, the tournament in which the heavy hitters would all get their time in the sun despite not being in the main bracket. CJayC even decided to have every match be worth 8 points just so that it would matter come the final standings.

Though no seedings were given in the TOC, everyone is aware that this is probably what it looks like on paper:

I'd have gone the standard 1-4 2-3 route to avoid the TOC final being the very first match, but to each his own. What it gave us was a Link/Cloud duel in the very first match, and despite this essentially being the TOC final this didn't mean that it was a good match on paper. Before this contest started and before we were all made aware of Nintendo going SSJ during this contest, Advent Children was the big wild card. Yes Link won in 2004, but a timely release of the movie could have propelled Cloud over the top had Link stayed constant.

Unfortunately for Cloud, Link did not stay constant. However, Cloud still performed better than many thought he would.

The expected happened early on, as Link jumped out to the early lead. But the same thing happened in 2004, and much like in 2004 Cloud weathered the early surge and made a push for his own. 2005 however saw Cloud do more than simply pull the lead to under 50 before bombing. Much to the shock of everyone who felt that Link would completely blow Cloud away on the backbone of the Nintendo increase, Cloud withstood Link's early lead of 100 votes to make a push at the match in his own right. After a minor struggle with the Hero of Time, Cloud found himself on a major push that saw him take a lead of just under 200 votes three hours into the match.

Had Cloud done it? Would Advent Children push him to an upset that was arguably bigger than what we saw in 2003?

...No. Link laughed off Cloud's 200 vote lead once the morning vote hit, and he went absolutely nuclear from then on. It was the same pattern we saw in 2004, only this time Link's surge was almost twice as damaging to Cloud. Much like what Link did with the morning and day votes in 2004, Link used the morning and day votes to absolutely explode and leave Cloud in the dust, and what was once a close match turned into another showcase of Link's dominance en route to Link capping his lead at just over 6350 votes before the second night vote hit.

The second night vote was slightly damaging to Link as it saw Cloud take over 500 votes off of the lead that Link worked so hard to build, but it served as nothing more than Cloud's final push at respectability in the match. To this end, I actually do believe that Cloud succeeded despite suffering his worst loss on paper to date.

After all, Mario and others proved that Nintendo and The Boost™ ran wild all over the main bracket, and Nintendo dominated Square throughout the contest. This could have easily translated into Link blowing Cloud the hell out of this match, but Cloud actually performed quite well given the circumstances.

However, one must wonder how badly Cloud gets beaten if Advent Children doesn't exist. This is the one factor I feel causes Cloud to not get completely blown out, and in effect those who argued that AC would make a huge difference were right. It was simply impossible to see how much Nintendo would increase between 2004 and now, which may be the big reason that Cloud lost. 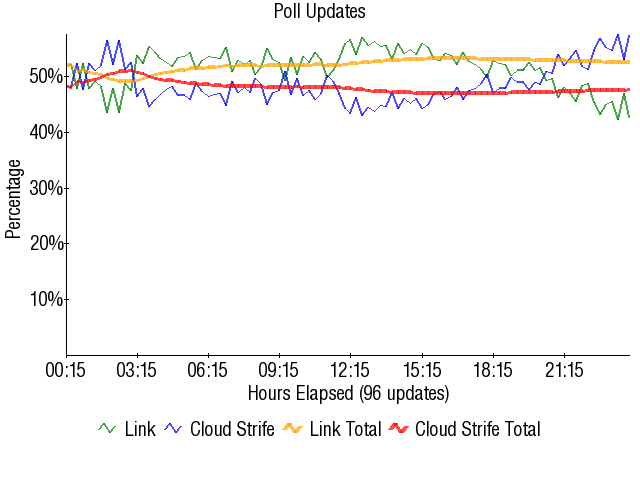 Retrieved from "https://board8.fandom.com/wiki/Link_vs_Cloud_Strife_2005?oldid=54628"
Community content is available under CC-BY-SA unless otherwise noted.