So finally, the final match of the Summer 2008 Contest is here. Everything we have seen so far in this contest has pointed to this match as a standard Link's slaughter of Cloud, Cloud's assault on Snake and Crono being in the fourth place far behind.

However, Solid Snake managed to do the impossible and maintained a small lead over Link 6 hours into the match. During this time, a large part of Board 8 was hoping for Snake to hold onto the lead for 24 hours. If this holds, Snake will become only the third character to ever beat Link in GameFAQs Contest after Cloud's championship run in 2003 and L-Block miraculous run in 2007 (Well, fourth if you count the Jay Solano's massacre of Link in 2006).

Unfortunately, when the morning vote kicked in, Snake allowed Link to build a 800 votes lead and increasing (even Super L-Block lost about 900 votes to Link during the morning vote last year). As a result, Snake fans lost their faith and not bothered to alert the internet in a huge scale during the ASV to counteract Link's advancement. Snake would go on to freefall throughout the day, allowing Cloud to cut his lead by more than 1500 votes from 3600+ to just over 2000 votes win at the end, and Snake has lost to Link by over 9000 votes when all is said and done (it's actually just under 9000, but I can't help it).

Still, Snake has fought a great fight. His final mission (to beat Cloud twice) has been accomplished. Karma Hunter is loving it.

And Link has won his fifth Character Battle title, out of seven contests. What a beast! Congratulations! 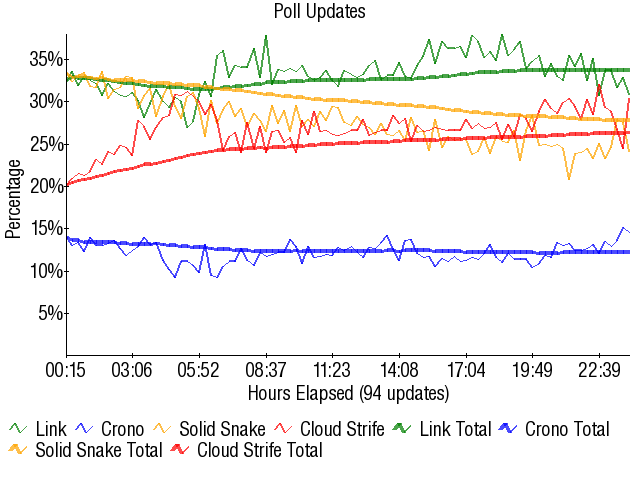 So yeah, really good season, one of the better we've seen, and... wait, what's that? There's one more match left? Well shoot, guess I better discuss it!

Crono's got this. That's funny, you'd think stats would be more reliable as we moved away from the fodder of the opening rounds, but instead this is probably the worst set of the whole year. Massive three way Nintendo LFF combined with massive Nintendo Sore Thumb Factor overperformance will do that to you, I guess! In any case all you really need to know from looking at this is that Link is the heavy heavy favorite going in, just as you'd imagine, but that Cloud is obviously up for a major gain now that Seph will be dropped.

Let's start with Crono. Everyone's picking him for last by a mile, which is obvious enough, but even though he'll be getting LFFed by two more powerful cool-looking swordsman I don't see him entirely falling off the map like most people are saying. CT held up extremely well against FF7 all things considered, and of course it did great against both LttP and Mario 3... I don't see that firm fanbase of his entirely abandoning him here, and so I bet he looks better than Snake did in the '07 Final pretty easily.

As to Link vs Cloud, well... Cloud had some very good showings this season, including outdoing Link's percentage in R2, and Sephiroth aside this ought to go down as one of his best years. Had L-Block survived long enough to let Vincent and Crono knock each other out with their split it would surely have moved Mario into this match, at which point I'm pretty much positive I'd have been backing Cloud. The two Nintendo icons in one poll, turning it into triple Brawl LFF due to Steroid Snake, with Cloud the lone Square option? Now that would have been some true Championship material Sore Thumb Factor! As is though it's Cloud taking the major disadvantage thanks to CT's strong SNES support, and I don't see any way this setup would not result in Link's biggest win over Cloud ever, percentage wise.

The real question of the day will be "can lightning strike twice"? And the real answer will be... sorry, but no. Crono has been great this year, but even so you'd have to figure that Snake needed Vincent in this match applying same-game LFF Sephiroth style to have any legit chance at the upset. Solid gets more bad news in the form of long time SSB star Link- yes he stood up to one Brawler fine in Kirby, but Link is much more likely to cut down his Nintendo support like Samus did back in the '06 Final, which could potentially limit his strength rather drastically. Luckily he's also got some good news! Link/Crono/Cloud, three cool looking sword-wielding RPG/action characters who peaked back in the mid to late 90s... that means Snake gets to be the one to stand out from the crowd here, and much like Kirby today and L-Block in the '07 Final, I think that will result in a decent overperformance. He'll never be in contention for 2nd outside of the Power Hour, surely, but even so I'm thinking he hangs in there closer on Cloud than most are expecting.

Alrighty, so all 4 players separated by decent margins but with no one really collapsing and Snake looking the best relatively. That ought to give us percentages along the lines of... *stirs up the final pot of the year*

Wanted to do something more crazy here, but ehhh, just can't see it. Great season everyone, this was fun!

Wow, just... wow. Greatest Final of all time? Ehh, I guess I'd still have to say Zelda vs Final Fantasy was epic enough to top it. But this stunner isn't too far back!

Retrieved from "https://board8.fandom.com/wiki/Link_vs_Crono_vs_Solid_Snake_vs_Cloud_Strife_2008?oldid=63157"
Community content is available under CC-BY-SA unless otherwise noted.