I was so caught up in the whirlwind of ZackFAQs in the last writeup that I forgot to mention Jade Curtiss, the TotA fan-favorite that despite his absolutely wretched performance last year... somehow made it in AGAIN this year. His performance was simply ghastly, and now we came to the main character making an appearance in this match... with LINK. With Jade being the logical Kratos to Jade's Lloyd (seriously, Jade made it in last year when Luke didn't), it was easy to assume that Luke would be made into the next Neo-Tanner.

Unfortunately, we neglected to take TSF into account - yes, The Sword Factor. With a big ol' slashy thing held up high and his mouth agape, Luke was a FAR more appealing option to the casual gamer than Jade's standing around and looking smug. And who knows, he might actually be more appealing in his own game, Crono/Magus style. I find it hard to believe that Xenogears' Citan is more popular than Fei, too. Anyway, Luke only performed like bad fodder here, instead of, well, Jade-level fodder.

Oh, there was something else here, wasn't there? Oh yeah - SHADOW.

This was supposed to be easy for Shadow. This was a formality, a measure of how well Shadow would beat up on high-end fodder before his confrontation with Zack. And he was going to have to pull out the stops today after what Zack did, but still - this was Zidane. Shadow had nearly beaten TIDUS back in 2004, and the unbeloved main character of FFX trumps the unbeloved main character of FFIX no question, right? So aside from the occasional upset rumbling that Link might affect Shadow and that Sonic Team sucks in the format from a select few people (ie yours truly!), this was going to be another Alucard/Liquid/Ness/Zidane. That was probably Zidane's best shot to advance in a match, and he couldn't pull it off.

Well, it all fell apart here. After the bracket vote wore off - very quickly, this board hates Shadow - Zidane was in control. BIG control. And he rode it to a very easy, very anti-climactic win to make the showdown... Zack vs Zidane?

There were some that argued Zidane had a chance here - and really, after this upset, you couldn't put it 100% out of reach - but it was hard to reason. FF7 vs any other FF rarely works out well for the other FF. Zidane would have to hope Zack not having his Buster Sword prominently displayed and some fan-favoritism would push him over the top, but even that was pushing it. As for Shadow, pretty much everything that was postulated came to pass... Sonic Team really WAS that bad in this format, and Sonic characters were basically Nintendo characters at this point. Because there was no way that Sonic Team was really just THAT BAD... right? 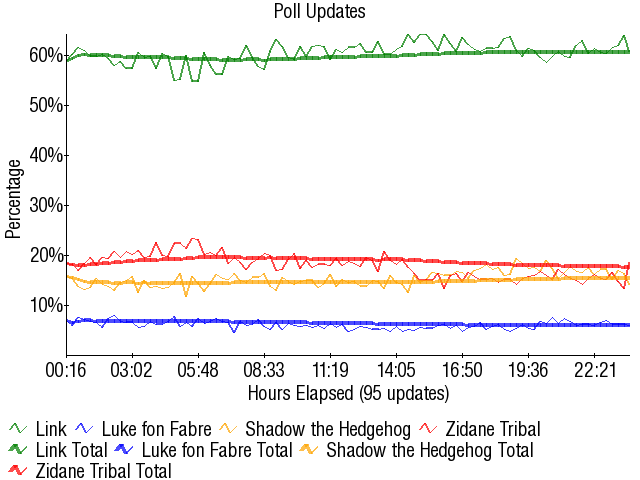 Moltar isn't breathing down my neck tonight, so I'm going to deliver a true treat (and one that I didn't really get to do last night despite my promise): my full Oracle thought process! We begin with

This is Luke's first rodeo, but since he's Tales and super niche and we've already seen Jade drop the ball with one of the worst showings in history, I'm going to just go ahead and assign him Jade's awful value from last year of 5.44. Now Link's value in '07 ended up being a guesstimate due to L-Block weirdness, but oh well, we know he's well over 50 and will be decimating this crowd regardless, so let's just leave it.

Shadow's value seems a touch high... but now that I look at it, he DID best Pyramid Head by over 10%, so I guess that's about right for him in R1. However he totally collapsed once the tougher competition arrived in R2, and Link's a one man tough competition group, so when you add in the Nintendo/Sonic Team crossover factor I don't see Shadow performing too far above the fodder line here. Zidane's 16 is based off that really disappointing performance he had against Alucard/Lake/Ness. I guess you can forgive part of that since he was against two other PSX characters, but honestly, I think that was a pretty good indication that the guy is high end fodder, in this or any other format. Still though I'll give him a slight boost because Square always brings its A game against big Nintendo.

So we take that all into consideration, adjust the values accordingly, throw it into the pot and after a few minutes of stirring we see...

Oh wow... Wario and Zack I could have seen going either way, but I was so confident in Shadow that I nearly called that result a lock in my Impressions topic a week back or so. Quite the surprise, and it leaves the Crew 0 for 2 heading into... the most unpredictable poll of the entire first round! Uh oh!

Retrieved from "https://board8.fandom.com/wiki/Link_vs_Luke_fon_Fabre_vs_Shadow_the_Hedgehog_vs_Zidane_Tribal_2008?oldid=63167"
Community content is available under CC-BY-SA unless otherwise noted.