Back when we were expecting to see Vincent in this match up, it was supposed to be a gimme. Vincent had already proved that he had elite-tier strength, and with Link there to godstomp Mario and Samus, there was absolutely nothing stopping him from moving on to the finals.

Of course, Crono couldn't allow that so he decided to pull a Frog, make a wild comeback, and... change absolutely nothing. Anyone who thought Crono had even a remote chance of losing this match was either delusional or thinks that he has as much overlap with Nintendo as, say, Sonic. He was cruising to an easy victory and a well deserved spot in the finals. Not much else to say.

But goddamn, it's hard NOT to feel bad for Mario after this. Since day one, he's been held down by SFF. He had to deal with Zelda in the first two rounds. Then he got her off his back to run into Luigi in round three, and shook him off to meet the king himself and suffer through an embarrassingly close match against Zack before this match. On top of it all, he was given crap for sucking it up the entire time through no fault of his own. This was a horrible bracket placement for him.

On a side note, no offense, but anyone who considers this a legitimate chapter in the Mario vs. Crono saga needs to slam their head in a car door. 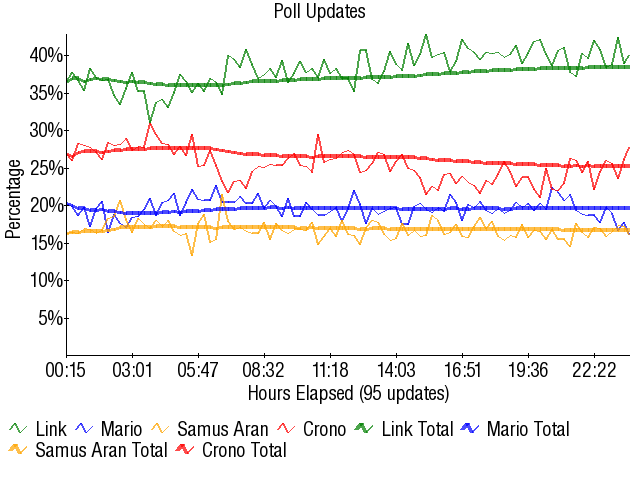 Now it's time to renew the greatest rivalry in Contest history: Mario vs Crono V, here we go! But is there any chance of this being another classic? Let's review.

Pretty good set of stats. I don't buy Zack being at Auron's level in this or any format, but he WAS being helped along by triple Nintendo LFF, so that value should be about reasonable. 2008 Pikachu was probably stronger than last year, but he was held back by Samus somewhat and may also have been hurt by having to deal with two other RPG characters, so again, it's probably a decent enough value there. Looks like Crono's a pretty big underdog... but wait!

LFF to the rescue? Crono had better hope so- I'd pick Mario over him 1v1, and in a 4 way... heck, I think I'd even take Mario over him with Link in the match! (Considering how MMX couldn't keep up, and he's probably not much below MM, and Crono should be right at MM's level in this format.) But with Samus being in the mix as well, I don't see any way for Crono to lose this. I mean in terms of fanbases we're basically talking about LttP v SMW v Super Metroid v Chrono Trigger, and could you see any way that CT loses there? No way, and that makes me think Crono will win over those old school voters handily enough to do what Zack couldn't and pull ahead of the Nintendo competition to advance.

So if Crono advances by a percent or two to bring the all-time rivalry to 3-2, what happens between Mario and Samus? Ehhh, I think Mario still edges that one out without too much trouble, but I'd be shocked if he beats her anything like he did in '05. Samus was in a much worse position last year (with Cloud/Seph there as well), yet held up admirably against Link. I think she improves on that showing by a touch, which MIGHT be enough to give her a shot on Mario... but probably not.

And how does all this crazy Nintendo/SNES LFF leave Link looking? Probably not too good, I'm thinking. I realize he's the King of SFF and all that, but we've already seen Zack gash him for respectable percentages time and again, and Crono should be able to improve on those showings without trouble. Beyond that, I don't know... I just get the feeling that with all this wacky SFF flying around, something weird is bound to happen, and what could be weirder than both Mario AND Samus holding up well against him?

Alright, so yeah, feel pretty confident in saying Link > Crono > Mario > Samus, but my gut is telling me that something really strange is going to happen in terms of how the percentages fall out. Let's take a stab with... *smokes, pots, stirs, and hands out*

Aww, Mario/Crono V didn't turn into the new classic we'd been hoping to see. Ah well, there's still next year. Galaxy and Brawl will be further from people's memories, and if CT:DS is as big as hit as it ought to be... alright, so I still wouldn't be backing Crono, but at least he'd have a shot at keeping it interesting IMO. Samus was SFFed down a touch harder than I thought and Link is going to overperform my expectations by a quarter point or so, but other than that things went more or less according to plan; odd, I was sure that much LFF would churn out something wacky!

• Previous Match       • Next Match
Retrieved from "https://board8.fandom.com/wiki/Link_vs_Mario_vs_Samus_Aran_vs_Crono_2008?oldid=63153"
Community content is available under CC-BY-SA unless otherwise noted.