This match pic is in such stark contrast compared to the last one. All four looked great, although Zero was completely irrelevant in the actual match. So was Link, really, when you think about it. He got first place, as usual, yawn.

This was all about Crono v Vincent, the most hyped match of the contest and for good reason. Contest people are obsessed with the Noble Nine to an ungodly sad degree -- Remember what the board looked like when Missingno beat Crono? I've never been more embarrassed to be considered a Board 8 regular -- and Crono wasn't overly impressive in either of his first two matches, especially with letting Zero get so close last round. Vincent looked somewhat "bad", but against much better competition. This was the best chance yet to break the Noble Nine's winning streak. I actually picked Vincent to win this, because the writing has been on the wall for Crono's decline for years and part because I am an absolute Vincent fanboy. If there was an upset I had I pick right, this was it, and I am proud to say I was a massive reason the hype for this match was so huge. Adding to that, look at the actual poll. Link, Zero, Crono. Also known as Nintendo, SNES/PSX, SNES/PSX. Vincent stood out like a sore thumb, so he was prime to pull off the upset.

Then the match started. tran covered some of the funnier quotes and I'm too lazy to go and look up more, but needless to say people were bragging hard on Crono's behalf. And they had every reason to. In 5 minutes, Crono led by 150 votes and 10 minutes later the lead was doubled. Coming back from stuff like this is extremely rare, and Crono made sure to make it even worse. After an hour, he led by 660 and the lead breached 1000 an hour later. Crono started slowing down a lot from here, but still pushed the lead to 1100 at 3 a.m.

Sometimes our hype is worth it, but here it seemed pointless. Tons of bragging about the Noble Nine staying alive, tons of whining about it, and so on and so on. Everyone that was here remembers all of it, and needless to say Noble Nine arguments are seriously the dumbest thing this board argues about. Why some people care this much about whether or not nine characters only lose to each other is just beyond me, and the worst part is it was nothing compared to the crap that happened after Crono lost to Missingno. There is a serious lack of a collective sex life on Board 8, let me tell you. Deny it all you want, children, but you know it's true.

Of course, there was one problem with all this. Right at 3 a.m., Crono just died. His lead would never reach 1150, and come the dead zone (that time between 3 and 6:30 or so when FF7 tends to dominate) Vincent started rolling. He stalled Crono for a couple hours, got the lead under 1000 by 5 and then just started going nuts. 1000 votes was knocked under 900 within 30 minutes, and he just kept right on rolling through the morning vote.

Given Crono's historically pathetic day vote paired with Final Fantasy 7's historically good day vote, the match was basically over. There was just too much SNES overlap here and FF7 was on an island being leashed by next to nothing, and finishing it off was academic. Vincent caught all the way up by 10, and though Crono was able to stall him for an hour and a half his bad day vote wouldn't allow him to retain the pace. Before long Vincent started building a lead, and before we knew it the match was over for good. Vincent went on to win this thing by 1700 votes, and what this win meant for the Noble Nine I honestly don't care about. It's not like L-Block didn't come out and render the entire argument idiotic or anything. Crono would also get his revenge in 2008 with a much friendlier poll that wasn't basically 3 SNES characters versus Final Fantasy 7.

Honestly, I don't really blame the format here since the first fourway was fine. It was the two that followed that mostly sucked, with the final nail being how pissed off everyone got when our long-awaited games contest sequel was ruined by fourway generational divisions.

you could argue that the first six weeks of this contest were nothing more than buildup for this match -- arguably the single most anticipated match of the contest before L-Block went silly. every match was compared to what it meant for this one. Frog disappointment? Crono's screwed! Aeris sucking? Vincent's screwed! Cloud does well? aw yeah Vince! the hype leading up to this match was so overwhelming that by the time you got to the match, it was almost anti-climactic.

Vincent had every conceivable advantage walking into this match. Link and Crono are practically the same character, on the same system, and Zero made for a third SNES character thrown into the mix. Vincent is a fan-favourite - Crono not so much. Crono is aging fast, while Vincent seems to be getting more popular if anything. by match time, Vincent was the favourite, and I'm pretty sure I was the only one that sided with Crono in the Analysis Crew. most of the other Crono supporters were, for lack of a better word, CT fanboys.

the opening to this match hit people like a ton of bricks. Crono opened the match tied with Link, and Vincent was closer to Zero than Crono. the overreaction was priceless, especially from people who hadn't defended Crono at all:

XxSoulxX: Gotta ask... Why was so many people so convinced in Vincent beating Crono anyway?

Karma Hunter: Wow, can't see this one being ANYTHING but over. Noble Nine wins again.

I actually called people on this -- despite picking Crono/cheering for Crono! -- and got nothing but laughter back. this was over. Crono took a 149 vote lead after five minutes, added 90 in the next update, and was up 429 votes in 30 minutes. for anyone else, this was over. Noble Nine preserved, a huge bandwagon crushed, all that.

but this was Crono. he's more Phoenix Wright than anything these days, and it's kind of sad to watch a classic fall from grace like this. Crono pushed his lead out to 1000 votes in two hours, but then he just stopped. by 5am he was losing votes. at 10am we had a dead tie, and from there it was over. it wasn't interesting, it was just another depressing result from a guy who just couldn't keep it up for 24 hours anymore. it was a mirror result to Crono/Sonic, another match people called en masse when everyone should have known better.

the end result was one of the more painful sights I can remember on board 8 - a board-wide explosion over "the noble nine". most stats topic vets didn't really care, as we had expected this for a while, but the rest of the board was obsessed with it. is it over, isn't it over, a ton of arguments over why, what is the noble nine, why do you all care so much, etc. it was really ugly.

my opinion on the matter was that, well, it didn't really matter either way, but I'd be hesitant to say Vincent automatically wins one-on-one. fortunately, an L-Block came along and showed us that this format is utter BS and that we can't really say anything definitively, and that whole argument ended up being meaningless. :) 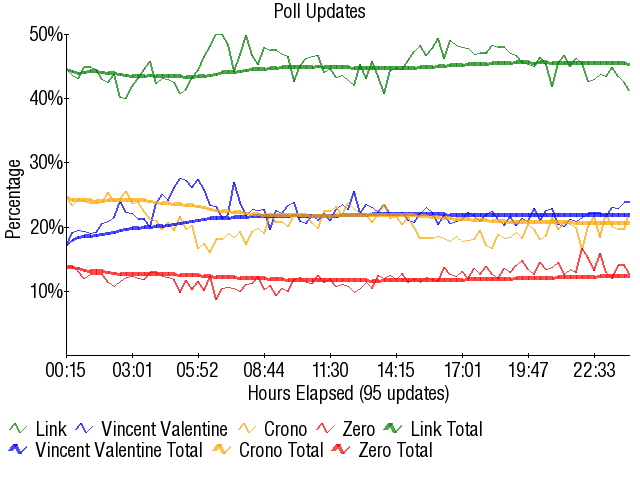 In just two years Crono had gone from being Mario’s equal and potentially stronger than Samus to being the low rung on the Noble Nine ladder. Vincent > Crono was a tantalizing upset for those brave enough to jump aboard, and their diligence was rewarded with this match, which saw an actually thrilling close race for second place between Crono and Vincent that was difficult to call until the last few hours. Crono started off with a decent lead, but Vincent came back with the afterschool vote (if memory serves me right) and though the two remained relatively close, Vincent had done the seemingly unthinkable and ousted a member of the Noble Nine.

Of course, for as much attention as I’ve given the term, “Noble Nine” really ain’t all it’s cracked up to be and existed originally as a blanket term for the eight strongest characters (who were coincidentally the Elite Eight of the 2003 contest) and Crono, who was Mario’s equal. There’s no substitution or anything like that. Whether or not you think the term matters, this match was both a big milestone and a good slugfest to boot.

Retrieved from "https://board8.fandom.com/wiki/Link_vs_Vincent_Valentine_vs_Crono_vs_Zero_2007?oldid=67830"
Community content is available under CC-BY-SA unless otherwise noted.