After the excitement of the previous day (<_<), we needed a breather - and while it's hard to NOT get all hot and bothered when Mr. UNfair is involved in a match, he did his best to oblige.

In all seriousness, this match was pretty much a gimme - Altair was going to need to perform significantly stronger than Duke to even give Zack a run here, and seeing as how he couldn't pull that off LAST round there was no way that was happening with Link sapping every drop of that casual appeal.

Anyway, Zack tore a nice percentage into Link as per last time, but without Nintendo and pseudo-Nintendo holding him back Link really swung for the fences. It's not like Duke and Altair are anything special, but they just got absolutely fodderized here. Link was looking more like Link 2k6 than Link 2k7, and seeing as how Mario got his face pounded in by the former it was going to be one tough number awaiting the plumber once he advanced next round. Though against MMX or Zack (or even Liquid!), no one could say.

It was also cool to see that our freeform pictures got off to a pretty awesome start as well. I'm of the opinion that we need to go back to one picture a match the whole way through a la 2k2/2k3 - some of these things were WAY too gimmicky - but if you do something, may as well go all the way. Round 1 multiple freeform pics, anyone? <_< 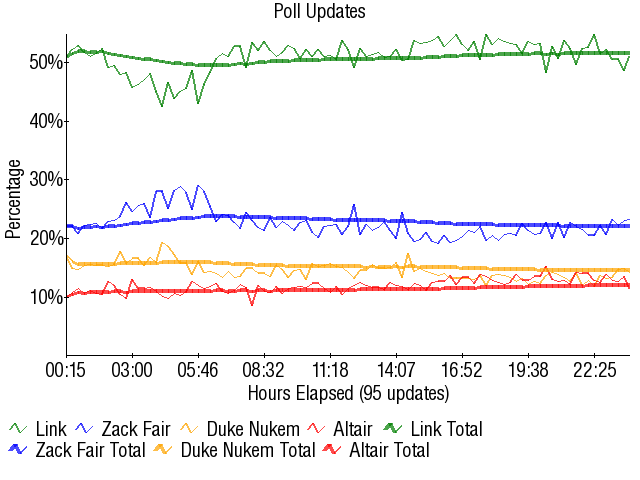 And this election has robbed me of my time, so let's hurry on to

Don't have them! I have to set up my spreadsheet to cover the R2 results once election fever is over. So let's rush on to

And converting those thoughts to numbers, potting and stirring should yield a result like:

Yesssss, now here's the Character Battle I love to see. Cloud and Link playing an interstellar game of HORSE- "match this!" "no, you match THIS!" Ah, just like old times! No matter how you slice it, Link holds the upper hand in the '08 version of their rivalry so far thanks to this performance- I'm seeing Oracles for him at 45, 46, 47... to barely fall under 50% all day is truly astounding. Oh, and Zack is once again putting on a very nice show of his own. Assuming Liquid doesn't crash the party, we could be in for one heck of a threeway between Mario and X and himself, something I never thought I'd find myself saying two months back.

Retrieved from "https://board8.fandom.com/wiki/Link_vs_Zack_Fair_vs_Duke_Nukem_vs_Altair_2008?oldid=67872"
Community content is available under CC-BY-SA unless otherwise noted.