If you needed any more proof that Link was going to tear this contest a new bunghole... tadah!

Aside from Link, every other contender in this match had a pretty interesting run. Zack Fair of ZackFAQs fame managed to wow the board by getting some excellent numbers on the Hero of Time. (Nothing like Blonde Haired Zack, though.) Mario had just gone through what was quite possibly the worst division run he's ever had. The poster boy for bad bracket placement, he endured many underperformances thanks to our good friend SFF. Mega Man X decided to rub some salt on the wounds, and gave Mr. Nintendo two dangerously close matches, and proved that he's more than worthy of comparison to his classic counterpart. With two heavy hitters in the match with him, and Mario with the largest of all monkeys on his back, Link could have taken anyone out of this match with him!

The initial rush of bracket votes gave Mario respectable lead for second place, but Zack was making cuts. He pushed past Mega Man X in the early morning, and caught fire at around four and eventually took the lead. Mario would take the lead back in the following hours, but the two would stay amazingly close to each other until the ASV, when Mario built a basically insurmountable lead.

Mario may have won, but his fate was sealed. Despite the almost memetic nature of his strength, Zack was definitely no Vincent. Considering he was facing either him or Crono in the next round, there was absolutely no hope for the poor plumber. At the very least, he could put up a good fight while Link laughs maniacally at the top.

And with that out of the way, quite possibly the most hyped match of the contest was set to begin. 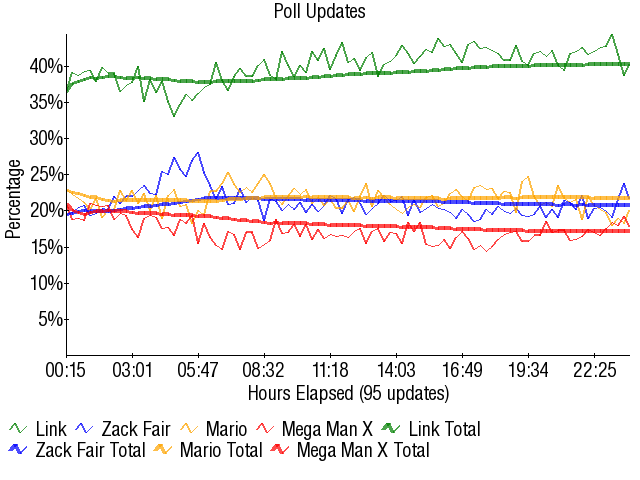 Bah, another bad Oracle pick. Got to reverse the trend! And how will I do that? Why, by picking the opposite of what I've been doing all year and finally putting a little faith in Mario, that's how. Let's hit it.

Ehh, both Duke and Liquid were clearly stronger in '08 than what we saw in 2007, but that is countered partially by their collapsing somewhat against the tough competition they ran up against in R3. So all in all these look like pretty reasonable numbers to me. As you see, Zack's got an upward climb ahead of him no matter how you try to tweak that.

On the plus side for Zack, he's got SFF working in his favor here, and in fact it's working overtime. Link's the King of SFF and has already laid a hurting on both Mario and MM, Zack will be the one standing out from the crowd, and Square always brings its A game against strong Nintendo competition, as I've mentioned many times. On the down side... these are REALLY tough competitors, and we've already seen the very dedicated fanbase of MGS crack under this kind of pressure. On the plus side, the FF7 base is about two steps up the rung from MGS... on the down side, Link is about five steps up from Luigi! Sure it would make for a great story, but nay, can't see Zack ever being in contention against Mario tomorrow- I don't think third place is entirely out of reach though, assuming X feels the Nintendo heat and weakens a bit from where we saw him last round.

Regarding Mario v MMX, I'm likewise not buying into the upset hype. X had the win handed to him on a silver platter last round (is there any character who could possibly disadvantage Mario more than his own brother?) and yet he failed me by not taking advantage of it. I'm now convinced that it was Mudkip more than Zelda holding the plumber back in R2, and since Zack is an independent draw like Liquid, I'd be surprised if X manages to get much closer than he did last round.

That leaves us with Link vs Mario, which... shouldn't be much worth talking about, really! The last time we witnessed Link v Mario v FF7 we were shocked that Link was only able to score 62% directly on the Nintendo mascot. I've got to imagine Link extends that percentage at least slightly in this one just because Mario and MM share deeper NES roots, but as I've discussed it would take a pounding more along the lines of the Battle Royale before I'd seriously consider either of those two catching up to him, so he ought to remain fairly safe.

In summary, while I'll admit to this match having excellent triple threat potential, I just don't think we'll get that lucky and the far more likely result is a 2 - 3 - 4 finish that, while fairly close, is never really in doubt. With that in mind, let's see what five minutes of pot stirring will result in.

That looks like a result I have can some real confidence in! Too bad even when I've been able to say that I'm still wrong half the time this season...

Sore Thumb Factor strikes again! As I was talking about yesterday, even though I acknowledged how being the only non-Nintendo option would be important for Zack, I downplayed its significance just because he doesn't LOOK like a sore thumb in the match pics. Kirby and Sonic literally stood out like fuzzy, puffy sore thumbs while Zack just looked like one of two cool dudes with swords. But I guess I was wrong, as has so often happened this season! It's looking like Mario has built himself a big enough ASV cushion to survive Zack's SNV without much trouble, but still, heck of a showing from this black-haired cloud, and it will be very interesting to see how he holds up when we switch back to 1v1s next year.

Retrieved from "https://board8.fandom.com/wiki/Link_vs_Zack_Fair_vs_Mario_vs_Mega_Man_X_2008?oldid=63155"
Community content is available under CC-BY-SA unless otherwise noted.