As heavily anticipated as this match was - would Mario, having barely eked out a win with Zelda and Mudkip pulling him down, lose to Mega Man X with Luigi hampering him? Could he lose to Liquid? - the excitement was over within the first update or so. While it seems odd to think that Zelda hurts Mario more than Luigi does, her own natural strength (and the fact that there was a whole 'nother character that, joke or not, is Nintendo at heart) is something that Luigi just doesn't have on his own.

Mario was definitely hurting, but this time he never really let X in the match and, once those first four hours were over, cruised on to an easy and decisive victory. Liquid did pretty well for himself considering the overwhelming competition (going from 24% on Seph to 22% on Mario, Luigi, and Mega Man X), but there becomes a point when other characters' natural strengths just become too much for a character that would have killed to just been called a respectable midcarder a year ago.

The real point of interest I found here was Luigi's performance. I've always been of the opinion that Player Two would just get pulverized against the superior brother, and while he didn't exactly make any waves here, 16% ain't that. Not to mention that despite pulling that number down while being weaker than Zelda and more connected to Mario, Mario ended up winning EASIER than before. Luigi'd probably pull down the same or better percentage that Bowser did in 2004, and seeing as how hero-sidekick SFF should be much more brutal than hero-villain SFF, that's saying something. What, I'm not sure, but to me Luigi's most impressive match came here in his loss.

The same thing would be true of Mario - this would easily be his most impressive match of this contest. Which means, of course, that very bad things awaited the plumber in the matches to come. 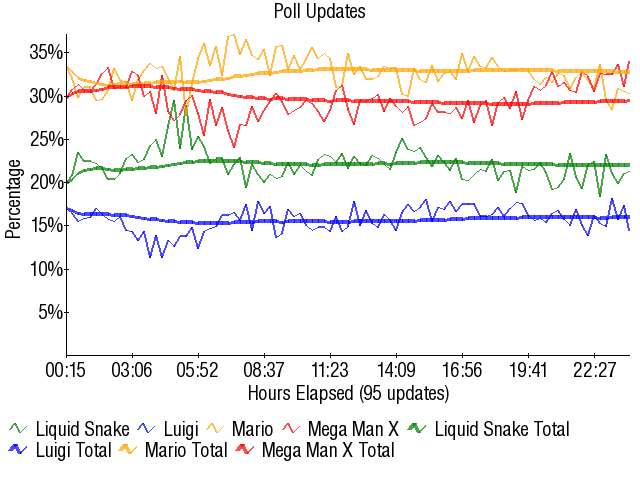 Speaking of Liquid, let's see if he'll have any real chance to ruin that threeway, starting with some stats!

...nope, still don't have them! But shortly, dude. Shortly.

Kind of weird circumstances whereby the real question of this match isn't how Liquid compares to X or X compares to Mario, but instead how Luigi compares to Zelda. With that Princess in the mix Mario very nearly embarrassed himself by tripping up against MMX. The good news for the plumber is that there's no way Luigi manages 20% of the vote like Zelda shocked us by doing. The BAD news is, you'd have to imagine Mr. L hurts his big brother much moreso than Zelda did, at least proportionally to Mega Man X. That means Mario's only hope for an outright victory would be to ground and pound Luigi right out of the gate, leaving him beaten down far enough to not mess up the morning vote he needed to power past X last time around. So, will he be able to pull it off? My money's on...

No! Nothing against Mario, but Luigi's been making serious strides ever since '05, and with the way he has held up against solid Nintendo competition in Kirby and Ganon and Bowser, I'm starting to put more faith in those Mario character polls that list him right near the top of the series' food chain. Now naturally Mario is still going to make him look bad, but I think the Player Two appeal will be enough the Bros. shared fanbase beyond where Zelda took it, and that ought to be just enough to allow MMX and his awesome character design to sneak through for the win.

Now, we know Liquid eats Nintendo LFF alive, and we know Luigi's going to be taking a bite out of the company's flagship... might he also have a chance at the upset? Nay! That 30% was nice, but there's a world of difference when you sub out Bowser for Mario and PW for MMX, and considering how he'd probably need something pretty darn close to that R2 percentage in order to advance, I don't see the Blue Bomber or the Red Plumber being in any real danger during these upcoming 24 hours.

Alright, so if Mr. M and Mr. X engage in another slugfest while This Arm hangs around looking respectable and Mr. L gets pretty beat up, that would probably come out something like... *ponders, pots, and stirs*

That looks... pretty shaky. But I don't know which way to lean, so that's understandable!

Ugh, really disappointed in myself for last night. I knew I was being foolish by discounting Mudkip's impact on Mario's R2 performance, but I chose to ignore that factor in favor of supporting my bracket and its MMX upset pick. Yeah, Mario has really redeemed himself with this performance, and I was a fool to not see it coming... oh well, I'll make it up to him by taking him over MMX and Zack next time around! The crazy thing though is, check this out, the Mario Bros are pulling down 49% of the vote today! If you'd told me that Mario would be finishing close to 33% in this one I'd have assumed that meant he'd squashed his little brother down out of the teens; very impressive to accomplish this despite L holding on so well.

Retrieved from "https://board8.fandom.com/wiki/Liquid_Snake_vs_Luigi_vs_Mario_vs_Mega_Man_X_2008?oldid=63173"
Community content is available under CC-BY-SA unless otherwise noted.