Finally out of Division 1, where we had just endured FOUR upsets in a row, tensions were high among board users (to say nothing of their poor, poor brackets). People even began to start hushed Chicken-Littleing *this* match. Though not for the reasons you might think, looking at the final score - the character being doubted this time was Liquid Snake.

And with good reason - Liquid has come out looking suspect in every contest he's ever been in. Yes, he went toe-to-toe with Frog when no one on the board expected him to back in 2004 - but thanks to the toady's shenanigans against Solid in Round 3, it was impossible to tell where Liquid stood. He had a good blowout in the Villains Contest, but then showed stunning weakness against Lavos and got killed beyond all comprehension against Sephiroth. And then there was the strangest performance of all, 2007. Liquid, in one of the most exciting finishes in the contests, managed to use some of that MGS final update magic (read: "cheating") to upset Alucard in a match most expected him not even to place in. So what does he do to celebrate? Gets KILLED by Alucard the very next round.

Meanwhile, Roxas was behind SFF thanks to Riku last year and, due to the nature of his role in KH2, had reasons to function as a protagonist-proxy of sorts and shock the world here. And few dared quell the sentiment.

Which was fine, because when the match began Solid's twin did that all on his own. It looks like Roxas really was that weak (which made Ryu H's performance last year even more puzzling... little did we know), because Liquid just tore him down worse than most anyone expected. But what was REALLY shocking was how close he got to Luigi. Take Roxas and Sho (by the way - WHO????????) out of the match, and Luigi wasn't even getting 55% on Liquid Snake. The same Luigi that easily beat Zero, Kirby, and Bacondorf. The same Liquid Snake that lost to Fraud Frog and ended up below RIDLEY in the Villains Contest X-Stats.

And at the end of it all we had another Nintendo character disappointing, Roxas ending up less close to Liquid than a random piece of fodder I couldn't name if you had a gun to my head, and an MGS character impressing more than most thought possible. The board was able to heave a sigh of relief - overperformance or not, at least we had avoided yet ANOTHER upset - but the fears were soon doubled with what was to come. Suddenly with Bowser in the mix, you had to call Liquid the prohibitive favorite to WIN next round. Rumblings of an MGS4 boost were also in the air, but if you played the game, you had to stop and ask yourself - really? Were GameFAQs voters so easily fooled as to give Liquid a boost from THAT?

(in retrospect, it really should have been obvious <_<) 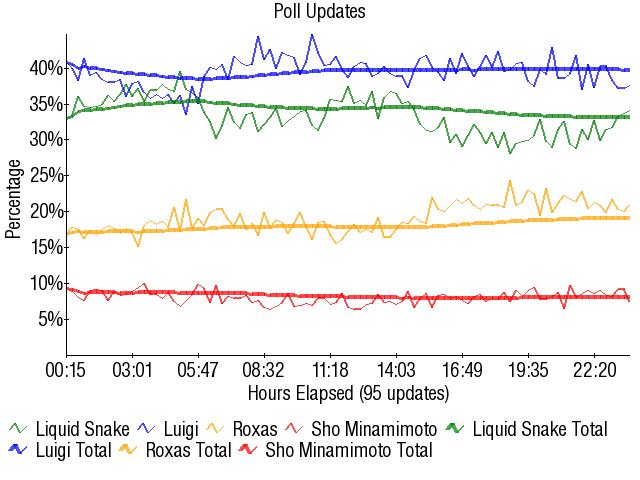 After a good showing in '06, Luigi once against looked like a stud last year. He advanced ahead of Ganon (pig pic or no) and would have had a great shot at downing Dante if not for Pikachu messing things up. He's got a strong picture here, no Nintendo characters to hold him back, and has no excuse to not perform around that same 30 value. L. Snake on the other hand is something of a wildcard... if he acts like his R1 Alucard-beating self he'll have no problem advancing, but why did he collapse so badly in his second showing? You've got to think he'll be looking more like the former than the latter though, what with MGS4 having been so well-received on the site.

Roxas is something of an unknown as well... Riku had a nice showing as soon as KH LFF was taken out of the picture, and of course Sora held up well against Squall, so I'd imagine that 17 is something of an underestimation. But then there's a THIRD wildcard thrown into the mix as well, in the form of Sho. Considering TWEWY was developed by the same team responsible for Kingdom Hearts, and with the characters having similar anime designs, you'd have to image there's a healthy bit of fanbase overlap here. I'd expect Sho to look pretty bad as a result, so we'll probably have to wait until Neku's match to see if TWEWY is worth anything in these Contests.

In summary, Roxas is probably a pretty good match for Lake, but between MGS4 and Rox getting held back a little by Sho, he should still be able to get by without too much drama. But heck, I've said this before! Throwing those numbers into the pot with a little bit of mix 'n matching gives us...

Liquid seems a touch low... but with the way things have been going, Roxas is going to take him down outright, so what the hey!

Whew, a little normalcy back in the Contest feels good after that wild and wacky Division One. Although Liquid somehow surviving the Day Vote to continue hanging this close with Luigi has certainly cost me some confidence in my Luigi > Bowser selection, I must admit... The Koopa King is going to need to put on a powerhouse performance in the upcoming 24 hours if that confidence is to be restored. Fortunately he's going to have an excellent opportunity to do just that!

Retrieved from "https://board8.fandom.com/wiki/Liquid_Snake_vs_Luigi_vs_Roxas_vs_Sho_Minamimoto_2008?oldid=66219"
Community content is available under CC-BY-SA unless otherwise noted.