On paper, this was a pretty boring match. In practice, it pretty much confirmed those preconceptions. But the implications of what all this meant was fun to munch on, at least for statheads.

The order of this match was as big a lock as the format would allow - Mega Man is a noble niner, despite his disappointments, and Mega Man X wasn't going to be far enough off from him to fall to Mudkip, who couldn't beat the fanbase split Luigi and Ganondorf. Meanwhile, Mudkip wasn't going to ever be in danger of losing to Lloyd, who barely beat Albert Wesker and who just got done blowing the ASV and immortalizing the phrase "pulling a Lloyd" against HK-47 last year.

And in the end, most of our expectations were vindicated, even though there wasn't much to go on - and what was scared the hell out of the board. Mudkip didn't falter in the slightest, breaking 40% on Mega Man X (remember when Zelda couldn't do that against MM?), who in turn was putting 45% on the whole pack. Sure, I've already discussed Lloyd's hilarious failings and no one knows who Tom Nook is, but still, it was hard to assert that Mega Man X was anything less than MM, and could easily be a bit more. yoblazer's hilarious analysis of their pictures and dissecting the badassery of the letter X only strengthened this sentiment.

There wasn't too much to say for the moment, though next round seemed damn scary. With Mario faltering, a Zelda that looked like she could stand up to anyone, a potentially stronger Mega Man, and MUDKIP... did we have the potential for something horrifying going down?

This was to say nothing of what implications that would mean for L-BLOCK. If there's anything the board bet against en masse this year, it was jokes, and Mudkip's success was making already mangled brackets set for another wail. 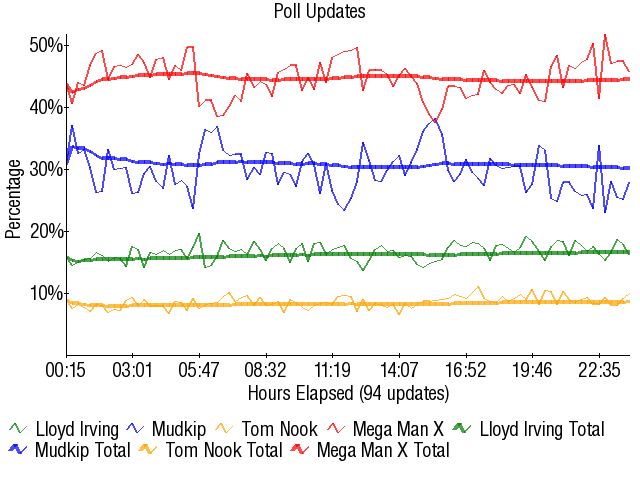 For today we're looking at quite the intriguing matchup. That seems weird to say, given that the #1 spot isn't going to be in question at all, and neither should the #2, really. What lends this match its appeal is the long-awaited Contest debut of Mega Man X... firstly because we've never seen him in action before and its hard to say how close to the original MM he's going to perform, and secondly because we'll be getting our first taste of how Mega Man 9 will impact this Contest. Talk about exciting! Let's see if the numbers hold any answers for us.

Original MM looked pretty darn solid in this format last season, scoring a value of around 39 while doing even more than was expected of him, including seriously contending for the win against Samus (sure he was benefited by the sprite round, but STILL). My best guess is that MMX is going to be a touch weaker than MM in these polls. "But wait! MMX beat MM straight up in that 'what's your favorite version of Mega Man' poll a couple months back!" Well yes, he did, but we've seen how far you can trust favorite character in the series polls as they relate to real Contest strength, and MMX > MM feels like one of those Yoshi > Mario situations to me. Still, it should be fairly close. What really has me pumped is to see what kind of impact MM9 is going to have here- with the Wii release on Monday and the PS3 and 360 versions also arriving this week, you couldn't have asked for a better time for the game to drop. People seem to be genuinely excited about the Mega Man series for the first time in many years, and IMO that's bound to do wonders for everything connected to the games, including MMX and Zero. But we'll see if I'm right about that.

What else do we have going on... oh, there's Mudkip. Even though I don't like Mudkipz, I've got to give the guy some credit, as he held up remarkably well against Luigi and some other decent Nintendo competition last time around. I doubt the fad has died off much, so he might even look better than the 22 value he posted in '07 for this one. But golly, I certainly hope not!

Lloyd is just... ew. Couldn't we please just use Kratos A as the pinnacle of what Tales is worth in these polls and stop noming everyone else? Actually I could see Mudkip starting fadilly strong before losing ground to Lloyd overnight. Then Lloyd would get all our hopes up like he did last season before allowing Mudkip to easily skate away from him with the ASV, just like HK-47 did. Ugh. Oh and I guess Tom Nook is involved in this as well. Hate to break it to the little guy, but last year was probably about the best performance he could have expected... with Mudkip in the way to steal his Nintendo joke fans, and other decent Nintendo options also present, he could very well have trouble being worth more than 10% in these stats when all is said and done.

Sooo, factoring what should be a good MM showing with what we saw from these last time, it shouldn't take more than a few minutes of stirring the pot to find:

Yes sir... Realistically, that looks pretty good. Would be so pleased to see MMX perform way above that and Mudkip way below, though!

...dang it all, Mudkip! IMO today's result gives us one answer (the kipper is fueled by "the kiddies", not 4chan, aside from a couple hundred votes in the first half hour) and leaves us with one question (what in the crap is wrong with Lucario? seriously, how can you have D/P, AND Brawl, and still be this far back of 'kip?). Certainly appears as though Zelda is going to be in for some trouble next round; but might even MMX be at risk as well? I shudder to consider it!

Retrieved from "https://board8.fandom.com/wiki/Lloyd_Irving_vs_Mudkip_vs_Tom_Nook_vs_Mega_Man_X_2008?oldid=67847"
Community content is available under CC-BY-SA unless otherwise noted.