This match was all about two things. The first, and arguably most important, was to glean something finite on the Bowser/Yoshi/Luigi trio. Bowser had beaten Yoshi soundly way back in 2003, and Yoshi had done the same to Luigi in 2004. Yet from 2006 onward, their performances had been pretty much reversed in terms of impressiveness - Luigi > Yoshi > Bowser was how the apparent chain was structured now. For Bowser, this was about proving that he was still at the top of the SFF chain. For Luigi, it was about validating his stellar performances from 2005 and onward.

Also in the mix was the X Factor of Liquid Snake, whose pedigree had been cast into serious doubt after Ocelot's bomb a few days back. If his round one showing was a fluke, everything else seemingly fell into line, so we had to wonder if Liquid really had what it took to take first here, or even place.

The picture also went a fair bit into altering perceptions. Luigi looked fine, but Bowser looked positively badass (although in retrospect, not as recognizable as he usually is... but it's BOWSER). Liquid Snake looked so horrible in his picture that people were actually getting even MORE nervous until it was pointed out that he's looked awful in every match picture he's ever had. Phoenix Wright, for his part, stole the show - the awesome close-up with anime lines streaking in the background was the greatest thing I could have imagined for him outside of a pointing picture, and it made it close regardless.

The time for the match came - but it was late, so we had to wait for one of those delayed "jump-start" Power Hours. When it came, Luigi surged to a lead on Nintendoism and brackets, but Liquid decided for once to NOT flop and easily took the lead in time for the end of the update. The real shock was the so-called "main event": Luigi had taken a big 59 vote lead on third place, which *could* be attributed to brackets except for the fact that Phoenix Wright was in third. Not Bowser, but a character that most considered to be high fodder - and that's when we were letting fanboyism cloud our judgment! Still, PW had a killer board vote, so we were waiting for that second update to see if Bowser would make a move.

And he moved - to all of a six vote lead on Phoenix. Meanwhile, Luigi had moved out to a 149 vote lead on Bowser and with that the match was decided in a flash. Liquid would go on to easily win despite Luigi KILLING Bowser. How badly did he kill Bowser? Well, he killed him so thoroughly that Bowser lost the lead to PHOENIX WRIGHT, who ended up leading him for a nontrivial portion of the night vote and ended up losing by less than 5000 votes. And this is to a character that was an hour of day vote away from killing Solid Snake.

Ultimately, it was a sad day for fans of the Koopa King, even though there was some rambling about Bowser being indirectly stronger based on Liquid's and Phoenix's proportions to one another. But still, just like Samus' throttling at the hands of Mario, it proved to be of little consolation. Liquid, for his part, had finally made the third round of a contest, but considering that he was bound to stand out like hell there was an argument for him there, too. MGS had gotten its second round off to a good start. 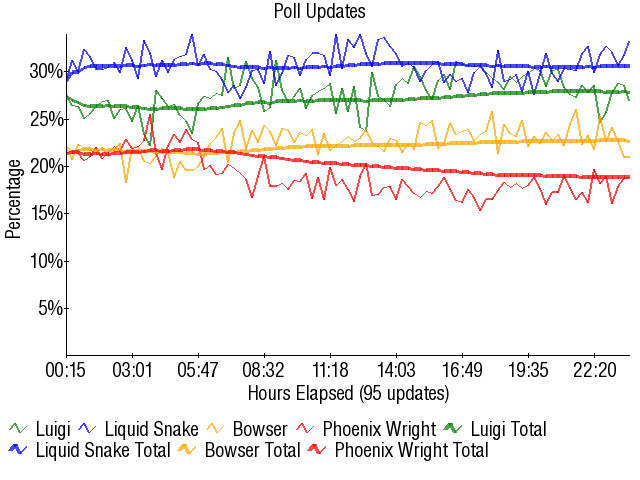 Anyways, tonight's got me flustered big time. Let's get right into it before I lose my nerve!

Just looking that over, the King of the Koopas would appear to be a clear favorite for the advancement in this one. BUT, I'm of the opinion that he overperfomed last round due to pretty much perfect placement- his status near the top of the Nintendo food chain allowed him to SFF down PW and Geno's percentage, while Cain looked like a generic old man from some RPG and couldn't take advantage of the split. He should still do well for himself in this one, and Phoenix should once again get his head handed to him beyond the first 15 minutes, but I don't see him finishing in the top two because...

Luigi's even higher on that N food chain! Or at least, that's what Mario favorite polls and the last few years of Contest results would have us believe. Personally I'm not as sold on Luigi > Bowser in this format as most others seem to be... sure the guy squeezed by Ganon, but he needed every advantage in the book to do so. Today the tables have turned somewhat and it's BOWSER who looks flat out awesome in the match pic, so even though I'm still sticking with a Luigi win, I bet Bowser keeps it closer than you might expect.

As for Liquid... ack! I was all set on Ocelot coming out guns blazing the other day to prove the MGS4 boost beyond a doubt with a great showing on Kratos. Then it would have been easy for me to pick against the Big Boss-like three way Nintendo split and have Liquid stand out like a sore thumb right into an easy first place finish. But then... Ocelot crashed and burned big time. And now I'm remembering how the last time I put faith in Liquid he likewise made a total fool of himself against Lavos and then Sephiroth. And NOW I'm checking out this match pic, and Liquid looks like such a tool! Seriously, ugh, could someone please create some decent artwork for this guy some day?

Soooo with Nintendo not performing up to standards to this point, Phoenix being there to further hold down the Mario guys, and MGS having at least a decent show of it so far, I'm afraid I can no longer stick with my bracket and the Luigi > Bowser I picked here. However I refuse to be burned by MGS faith yet again, and so I'm stubbornly not moving from the Luigi side of that prediction. Here's hoping for an awesome fatal three-way tonight! Let's stir the pot and bring out...

That looks... like it's not going to happen! But dang it, I tried my best.

Ugh, dang it all Phoenix. You fold to 11% against Mario and Big Boss, yet pull down 19% against Liquid and Luigi/Bowser? Worse yet he ruins both my Oracle and my bracket; I really think Mr. L could have competed for the win here if this triple Nintendo LFF had only been a double. Oh well, at least we won't have to sit through another embarrassing performance from Nintendo tonight... though that's only the case because there are no non-Nintendo options in the bunch!

Retrieved from "https://board8.fandom.com/wiki/Luigi_vs_Liquid_Snake_vs_Bowser_vs_Phoenix_Wright_2008?oldid=67866"
Community content is available under CC-BY-SA unless otherwise noted.