Sorry Vergil, but you're not worth talking about here.

For 10 hours, this was the match of the contest. Given the format and the three top characters all being from Nintendo, Mudkip had a very real chance to sneak into second place here given his fad status on the internet. Joke characters had mixed success to this point, but none had yet reached round 3 unless you count Marcus Fenix (and you should given how bad his series is).

When the match began, it... didn't actually begin. There was a 30 minute delay for some reason, but when things finally got going Mudkip was in great shape. He, Luigi and Ganondorf were more or less tied for first place for 5 minutes. Then the next update came and.... bam. Mudkip in first place, Ganondorf a close second and Luigi a distant third. Ganondorf > Luigi was basically decided at that point, and overnight Luigi fell way behind Ganon for good.

But the star of this match was Mudkip, even if he did end up losing. Within an hour, even with the delayed start he jumped out to a 500 vote lead on Ganon. Ganon cut off 100 votes really fast once it hit 500, and then overnight he was gradually able to catch up and overtake first place for good.

Luigi vs Mudkip was a different story entirely. Remember this match? http://board8.wikia.com/wiki/Marcus_Fenix_vs_Kefka_vs_Cloud_Strife_vs_Revolver_Ocelot_2007

Same kind of deal. Ocelot and Fenix basically came back on Kefka at the same rate, so come the day vote Fenix caught momentum and won since Ocelot never really built a lead on him.

Here, the gap between Mudkip and Luigi was never really more than 1000 votes. Once Ganon came back to take the lead, the floodgates opened and everything collapsed on Mudkip. Luigi easily erased the entire lead by lynch with the morning vote, and then kept right on going all the way until the end of the match. The final numbers are a bit misleading though, because this was an amazing match until Luigi finally came back.

However, Mudkip's exit meant L-Block was the only true joke character remaining in the contest. They'd all gotten mixed results, some good some bad, but it looked like the end was near for them and all the people whining about jokes could get back to their kosher contest.

ahh, Mudkip. the first serious test for "joke characters". Mudkip is fairly infamous on the internet thanks to 4chan's, uh, genius. with Ganondorf and Luigi expected to split votes, could Mudkip sneak in? we already knew that joke characters are fairly static entities that don't really move much based on stronger characters taking up poll space. Mudkip had some legitimacy to it since it's a fairly popular starter in the GBA versions, but a good chunk of its strength came from the internet fad. those votes were not going to abandon it for Luigi or Ganondorf. it all depended on how hard the vote would split. if one "SFF'd" the other significantly, Mudkip had a great chance.

I don't think most of board 8 was ready for this possibility, though. a lot of people flat-out detest the Mudkip fad, and it was never more apparent than the start of this poll. a Glitch in the Matrix delayed the poll 30 minutes, but when it did begin, Mudkip was only in third place. joke characters usually rock the opening seconds, but not Mudkip today. Luigi and Ganondorf looked safe.

Mudkip fought back from third place and took a 1 vote lead going into the first freeze. all three characters were within four votes, but Ganondorf had been bleeding percentage. given that he was the bracket favourite, this looked bad. the first five-minute update scared the hell out of everyone, though. Mudkip gained 17 votes and Luigi fell off the earth, dropping 78 votes to Ganon. the next update was even scarier - Mudkip exploded and won the update by 150 votes while Ganon and Luigi stalled each other. Mudkip was up 220 votes and showed utterly no signs of slowing down. the next update was another 100 vote gain, and then a 70 vote gain. within half an hour, Mudkip was up 500 votes on Ganondorf and 800 on Luigi.

mass chaos ensued, of course. 4chan was blamed, some serious whining occurred, and votes were through the roof despite the poll starting late. half of board 8 was refreshing /b/ and several of them were posting there. I remember someone, I think Albion, quoted a message of mine and called me names. yay, anonymity! it was a pretty wild night.

after half an hour, Mudkip slowed down, Ganondorf started fighting back, and Luigi just kinda sat there. Ganondorf grabbed the lead by 6am, but Mudkip was still up on Luigi by a thousand votes. plus, in round 1, Mudkip had a really impressive day vote, suggesting that he wouldn't just roll over to Luigi. 1000 votes seemed quite manageable for a Nintendo icon, though.

then the morning came. Luigi's biggest strength is his morning vote, and it showed. within 3 hours the lead was gone and Mudkip ended up losing to him by over 4000 votes. everyone calmed down, hugged their brackets and praised the "kiddie vote" for saving Luigi against an internet joke. the night was scary as hell, but the crisis was averted. :)

the main thing I and some others took from this match, though, was that joke characters were not to be messed with. the same situation was going to present itself in a few days, L-Block had already looked stronger than Mudkip, and the competition (DK/Kratos/Kirby) was a lot tougher thanks to the absence of a weakling like Vergil. L-Block's match was the most anticipated of the second round by far after seeing Mudkip scare the hell out of us. 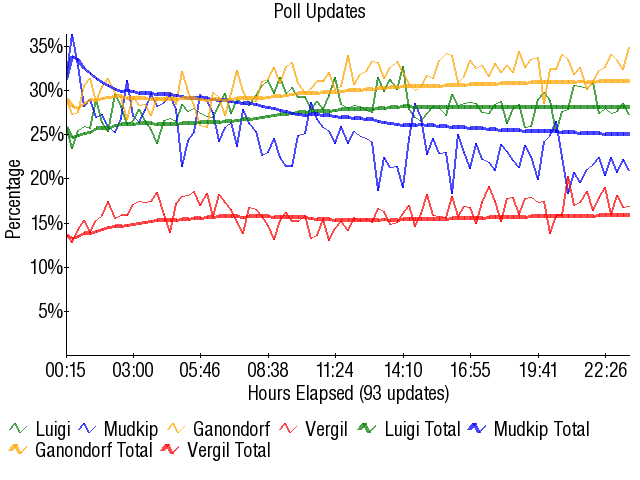 Retrieved from "https://board8.fandom.com/wiki/Luigi_vs_Mudkip_vs_Ganondorf_vs_Vergil_2007?oldid=66426"
Community content is available under CC-BY-SA unless otherwise noted.