This was a weird match, though it was admittedly a fairly bad one by the numbers. Round 2 is typically filled with matches that smack aside the weaker character so elites can have their fun, and this contest was really no exception.

That said, this was funny past Mario's predictable first place finish. People had Magus in their brackets, and round 1 proved he was stronger than Phoenix, but Big Boss was the wild card here in a potential Magus vs Big Boss showdown for second place.


Now look at the picture for this again. Notice a difference?

Naked Snake in a picture sealed Magus' fate before this match ever began, and the weirdest thing of all here is Phoenix won the board vote but there wasn't much fanfare when he fell off into last place. If there's a series that can rival Phoenix Wright's unabashed fanboyism on Board 8, that series is Metal Gear Solid.

Magus held up with Naked Snake for about 15 minutes, then got completely crushed. There isn't much to say beyond that, since the gap between Big Boss > Magus and Magus > Phoenix was almost exactly the same by match's end.

Could Magus have beaten the bad melty art of Big Boss? Maybe, maybe not, we'll never know. But the reality here is he got thoroughly wrecked by the Naked Snake pic, in arguably the best match to prove "pictures matter".

Hell, it's still an example on the Pic Factor wiki page.

ohhh yeah, Naked Snake. the second this picture was unveiled, the entire match changed - before that, it was Big Boss's ugly-as-sin picture against Magus, who had been disappointing but hadn't fallen enough to actually warrant serious discussion about being upset. but after the picture was unveiled? Solid Snake redux, the greatest picture factor we've ever seen. the board dropped Magus like a sack of bricks and jumped on one of the biggest bandwagons in recent memory -- the Analysis Crew went 9-0 for Big Boss here and the entire board knew their brackets were screwed and wanted to see what would happen. it's a weird day when a match involving Phoenix Wright isn't anticipated because of him, but because of other circumstances.

the match started, and it was close as hell -- no one took more than a ten vote lead throughout the first five minutes. the first update after the freeze was also a stall, with Big Boss enjoying a 3 vote lead.

after that? annihilation. a lead of 110 votes at 00:30. by 1, it was up to 319. by 2, the lead had doubled and it wasn't stopping. picture factor won out over the experienced entrant -- or so we assume, anyway. it's impossible to tell what Big Boss could have done without the Naked Snake picture. some think that he would have won anyway - he had a nice round 1 performance after all, and Magus really sucked it up in the Phoenix/Bomberman match. this match wasn't even close, either. Big Boss went on to a 10,000 vote win, and Magus truly looked awful. from 35% on Link to half of that on Mario, Big Boss and Phoenix Wright. ouch. 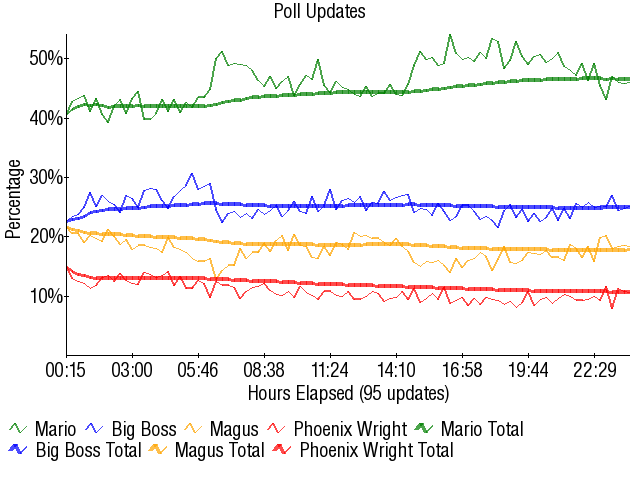 Retrieved from "https://board8.fandom.com/wiki/Mario_vs_Big_Boss_vs_Magus_vs_Phoenix_Wright_2007?oldid=66399"
Community content is available under CC-BY-SA unless otherwise noted.