After Round 2, this match was basically seen as something where pretty much ANYTHING could happen, and the crux of it all rested on Mudkip. After all, we were talking about an entity that led a split fanbase of Ganondorf and Luigi for half the match. Sure, we were talking about much stronger entities in Mario/Mega Man X/Zelda, but there were arguments for all three being essentially Nintendo and the fanbase split being much more severe thanks to it being three ways instead of two ways. Couple that with joke characters seemingly having even MORE power this year than last, and... well, people were scared.

Zelda was also a wild card. She had held up pretty well last round, but most thought this is where it would end. With a probable SFFed Knuckles and Fei Fong Wong being replaced by Mega Man X and Mudkip, Fourth Place Factor would likely rear its ugly mug and put her down to an SFF collapse. Mario was pretty much going to be guaranteed in placing, so he had to put a performance up to show he'd be able to handle Luigi next round and stop the winner of Mega Man X and Mudkip from taking him down.

The result of all this banter would be an exceedingly strange result, and one that ultimately signified the ultimate end of this contest. Mario and Mega Man X started off on a tear due to their bracket support, but as that wore off they just continued to climb. Mudkip was DYING here, and letting Zelda into striking position. Remember, this was the same Mudkip that nearly edged Luigi and Ganondorf, the same Zelda that got fodderized by Link. For all the power Mudkip had put on display in its first outing, the joke just wasn't connecting here, and Mario and Mega Man X easily had the match in hand by the first update.

But here's where things got wonky. Mega Man X, presumably due to the board thinking he needed the help more than Mario, started very close to Mario. The next update would seemingly rectify this - but instead we got a stall, with Mega Man X actually cutting three votes. This got people slightly nervous, but flukish things happen at times like this, right?

Then we got an update with MMX taking a 40 vote LEAD over Mario.

This was pretty much when Mario in general started to take the heat for all its failings. Nintendo failing was one thing, but at least there were some examples of Ninty doing well - Link and Samus, for example, looked to have at least maintained pace. But Mario had Luigi, Bowser, Yoshi, and now the big plumber himself unable to put away one of the biggest has-beens in video gaming. Fanbase splitting, sure - but Zelda and Mudkip were both still putting WAY too much on the big guy, a guy who looked capable of SFFing characters like Zero back in 2005. This, to put it lightly, was a disaster.

And for awhile it looked like the match might morph into a catastrophe for the plumber, as MMX rode his crazy early vote (Power Hour has nothing on MM early vote) to a lead that looked like it was on track for 1000. But MMX is basically just Mega Man in the end, and right around that designated 3-4 hour mark, his momentum stalled out and he pretty much just died. Mario reluctantly came back to the match, took back the lead, and *slowly* built himself a lead of not even 1500 votes by the end, despite both him and MMX taking up the lion's share of the pool.

This meant a few things - firstly, that you do not mess with anything Zelda as long as it's not put up against Link. Zelda may be one of the most worthless characters ever from a character standpoint, but that name brings with it a kind of resilience that most wouldn't even dream of thinking of. This was also the final step in her slow but inevitable show of performances upending the once conventional wisdom of Ganondorf > Zelda. Even if the King of Evil was stronger indirectly, it was getting harder to see how he was going to win a direct match against the series' namesake.

Secondly, Mario was in deep trouble - not only next round (although a firestorm of debate was triggered on whether or not Luigi would hurt Mario more or less than this), but a stronger than expected Zack and whoever made it out of the quarterfinals was going to make Mario's path absolutely hellish considering Link was going to be in those matches. And if Mario didn't make it through, then the contest was all Link's (or L-Block's, but I'll get to that in a second).

The buzz on MMX > MM was as high as it's ever been during this match, although watching him bomb the last 20 hours of the match just like Mega Man proved a tad deceptive for direct evaluation. The jury's still out for me on how they stack up directly and indirectly, though I will allow in the former that it's a lot more picture dependent. I can't see the MM picture that he got against Ryu in 2k6, for example, come even close to beating MMX.

And finally, with Mudkip being the first joke character we'd ever seen to just outright FLOP... suddenly, they looked mortal. Still, we didn't yet dare to believe against L-Block. Still, it was nice to see one of the more annoying jokes fall. Who cares that it took arguably triple SFF and three Noble Nine level opponents to do it! 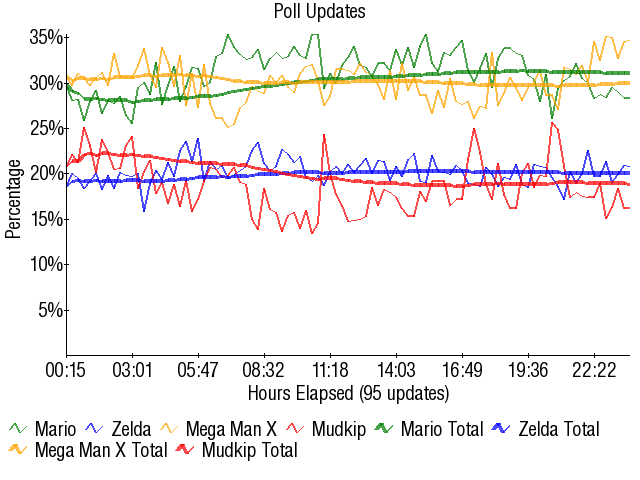 Originally I had this one chalked up as an easy advancement for Mario and MMX, but in the end I decided to move Zelda into this grouping instead of Knuckles, at which point I realized... uh oh, the Kipper just might joke himself into contention! Let's try to figure out how realistic that would be.

Just looking at those first two you're thinking whoa, not only will this be Mario's in a cakewalk, but Zelda might have a chance to slide by as well! And then you see how impressive MMX was also... and then heck, even Mudkip looked like a champ! In reality it seems pretty clear that all these numbers are too high- Knuckles was surely hit with some platforming LFF by Mario to weaken him from 2007, while it was rather obvious that Lloyd (like Kratos A) got stung pretty bad by having to deal with Nintendo competition here in '08. Regardless though, the gaps are large enough where the Nintendo food chain of Mario > MMX > Zelda with decent sized gaps in between shouldn't really be in question. The troubling thing is... where does Mudkip fall?

Well last season he had to compete with triple Nintendo in R1 and pulled down 28%. This year he had triple Nintendo in R1 and got... uh oh, 30%. But not to worry! Because in R2 last year he faced tougher Nintendo opponents and fell to... 25%. Crap! Considering Mudkip is apparently stronger this year, and considering that joke characters as a whole are certainly stronger this year, it doesn't seem impossible for Muddy to maintain that 24-25% he seems to like snatching up. And if THAT'S the case and Mario/Zelda keep the same ratio while X bombs and can only hang around with Zelda, then Mudkip is going to pull through easily! This is some serious trouble we're in folks... so why aren't I backing the upset? Two reasons:

1. Anti-favoriteFAQs. It shouldn't be as big a deal as it was in R1, but even so I think 95% of voters are going to consider Mario an easy choice for the win tonight and some will instead throw their vote to someone who might need it more- and I think that secondary choice will be X more often than not.

2. The pictures. Hey hey, thanks SB! Not only does Mudkip look sad and way too zoomed and not nearly as jokey-hilarious as last year, but MMX looks awesome and is sure to draw plenty of attention away from such a normal-looking Mario. But best of all, Zelda got Celda'd! I see this as strongly limiting her appeal, and the less appeal she's got the more legit votes there will be for X to eat up.

Come on fighting robot, you can do this yet! (Though I still think it could be too close for comfort!) I've stirred this pot and am bringing out...

Haha, what a fun match that was! I never lost my faith in Mario, because as I kept pointing out in Stats MM has been a beast in the first three hours for a few years now, but that hasn't kept him from dropping like a stone the rest of the time. Still it was funny when I pointed out how Mega had jumped to a 169 vote lead on Samus before collapsing, and then the very next update MM hit 170 and continues climbing by 50 during many updates. So Mario will end up winning and doing so with ease, but this still makes the rest of his run so much more interesting... With Luigi in the picture for R3, will he do more damage than Zelda and allow MMX a win? When it's Link/Mario/MMX/Zack, can we expect Mario and MM to again be in a dog fight, allowing Zack to slip on by?

However this match has possibly an even larger impact character: Mudkip. I know I know, he's not a joke, or at least not in the same way as Block/Bag/Cube, but this was still a huge collapse from a guy that many of us though would have a more static fanbase thanks to that extra joke appeal. Is this a signal that voters are tiring of these joke characters? L-Block and Dog put up a huge number, but WCC failed to match that performance by a long shot, and then the Bag was even 6% further back of the mark... Maybe I'm just getting my hopes up only to be crushed once again, but this is starting to make me feel better about Ryu's chances in this next one!

Retrieved from "https://board8.fandom.com/wiki/Mario_vs_Zelda_vs_Mega_Man_X_vs_Mudkip_2008?oldid=67837"
Community content is available under CC-BY-SA unless otherwise noted.