After putting up a percentage that is typically only seen by high midcarders and near-elites, Altair was looking GOLDEN for this Round 2 throwdown, and the Oracle predictions show it. Duke was also looking great to advance, as Marth had beat him by an unconvincing margin and Lucario, pathetic as he is, was definitely going to hold him back.

But we soon saw that Lucario nearly getting upset by Isaac was no fluke, and Altair's 43%+ didn't mean as much as it first appeared when stacked up against characters that actually have a fanbase. It also couldn't hurt that Duke drew all the picture in the match pic and him winning was starting to be embraced as a fad by half the board, but if Duke ever put up those kind of numbers we'd be suspect from the get-go.

What ensued what was in retrospect a pretty close match, although not recognizing the potential of Altair's day vote at first made it deceptive. The board did its darndest to keep Marth over Duke in the initial surge, but the power of Lucario-lovers was too much and he was immediately dragged down to earth. Altair was apparently bombing though, so it seemed he was safe to advance.

And that thinking lasted all of one update, as Marth just fell off the face of the earth and Altair surged ahead, taking the lead and just not letting go. Duke had a killer night vote on the lot of them, though, and by morning had built himself a practically insurmountable lead. Altair had a go of it, however, and ended less than 1000 votes away from Duke by the end. That retrospective closeness would only underscore the most important thing - Duke had somehow yet again pulled an extraordinary upset and beaten a big favorite for the win. Considering this is the guy who was getting put up as a 16 seed milk carton against Cloud and was thought to have left these contests for good, that's really saying something.

For the board's part, we could at least exhale - this weird ass half-division was finally done, and neither of the competitors had put up the numbers to give confidence in beating Zack. We were sort of ignoring the fact that Duke and Altair escaping gave most of us ZERO points in our brackets but, eh, details.

Lastly, I'll save one last cringe for Marth. How do you let the equivalent of Isaac get 40% on you? Marth's strength is either much more suspect than I thought, or he somehow let Lucario rSFF him. And if the latter case is true, that means that somehow one of the elite top tier characters of SSBM, fan-favorite in both games, is somehow lower on the totem pole than a Brawl-only nobody. Neither reflects well on the pantsless one. 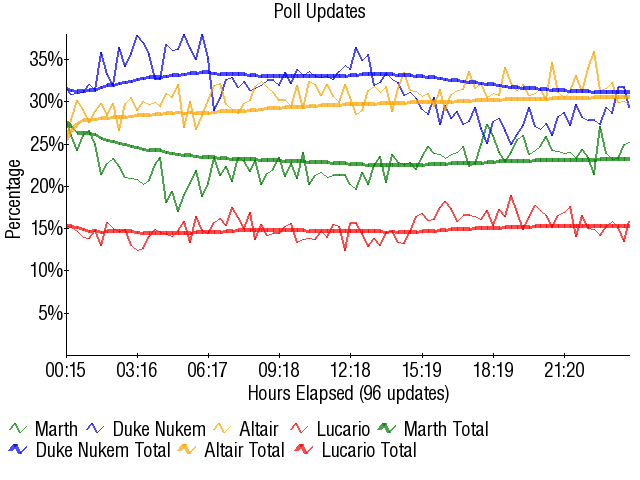 Anyways, today- wowza, what a mess of a matchup! We knew Division One was going to be wild heading in, and boy has it lived up to the billing. Let's break out my new R1-based writeup format and get cracking!

Now obviously that Altair number is a little low, because Guybrush looked a decent bit better last month than he did a year ago, but the point remains - everyone going crazy over him needs to take a step back and realize that he only blew out a guy who's as strong as Isaac. Not only that, but an Isaac who was being LFF'd by another Nintendo option! You don't exactly have to be a Titan of the industry to pull that off, and heck, I think even Duke could have done it, so Altair's going to have a difficult time finishing second tonight IMO.

Lucario... is just awful, no way around it. His only hope is that he shares less of a fanbase with Marth than he did Isaac- which I guess is ALMOST possible given their Nintendo handheld overlap, but nay, Luc must get almost all his votes from Brawl so it's much more likely that Marth murders him. I'd have to call last place a lock for the guy, and by a large margin.

The coolest battle should be for first place between Duke and Marth. Chalk me up as a big Duke disbeliever, but even I've been forced to warm up to him this past month: between making the Contest banner pic, dominating this match pic, Forever, and his taglines making him the best joke option of the bunch, I've got to believe Nukem has the upper hand in this group. Even so, I see Marth beating down Luc so effectively that he'll be able to make something of a run at Duke during the Day to keep this one interesting, and at the same time give himself enough of a gap to not be overcome by Altair's Xbox ASV.

Sooo Duke > Marth > Altair in a fairly tight one with Lucario lagging well behind ought to spin to something like...

Pretty much all the long-time Contest vets were up in arms when we found out that this year's Contest would once again be a 4-way, and I'll admit that I was just as opposed to the idea as any of them. While I still feel that we're overdue to return to 1v1s for '09, I've got to admit that occasionally this format can turn out some real gems, and these two matches are a great example. Both yesterday and for tonight you could make a strong case for any of the top three characters finishing in any position, and that's pretty amazing IMO. Speaking of the current match, I can't say too much right now, as Duke has completely fallen off the map with the ASV (the only surprising thing is that it didn't happen sooner!) and will need to recover soon to ensure Altair doesn't overtake him. The one thing I CAN say though is boy, what a disappointment from Marth! You're a two-time SSB veteran, how are you letting a guy who got owned that hard last round hang around in this one? Bah, I guess the D/P generation of Pokemon isn't as pathetically weak as we all thought a few weeks back.

Retrieved from "https://board8.fandom.com/wiki/Marth_vs_Duke_Nukem_vs_Altair_vs_Lucario_2008?oldid=67865"
Community content is available under CC-BY-SA unless otherwise noted.