In the first match where Pikachu actually shared a fanbase with someone, where EVERYONE wanted him to lay down so Luigi could advance, Pikachu screwed Luigi over and cost him a shot at the semifinals. Luigi getting into the semifinal and not Mario would have been pretty funny, but a yellow rat got in the way.

Early on, it was clear Master Chief was in his element and he cruised out into first place, never to be threatened at all. Behind him, the order was actually Luigi > Pikachu > Dante for 10 minutes. But eventually the Nintendo Power Hour ended, Luigi and Pikachu stole each other's votes and Dante cruised into second place. Neither of the Nintendo characters were able to recover, since they were fighting with each other and not Dante for all the votes.

I know everyone remembers L-Block's run from this contest, but Pikachu's was just as impressive in several ways. Not only did he get into round 4, but he totally backstabbed his Nintendo brethren in the match he finally lost. That's one heck of a storyline, and lost in all the whining about it were Master Chief and Dante finally making their well-deserved deep contest run. Flash in the pan or not, they've both done a lot for the industry and really deserved some long-awaited attention on our site.

Pikachu, at this point, was a cross of pure-bred evil and luck. he advanced this far thanks to two Square characters, two Final Fantasy characters and two Capcom characters. if Pikachu was going to go down, he was going to take someone down with him -- and that was Luigi.

within 24 hours, Luigi went from a possible first place finish to an underdog to advance. we were looking at three "mature" characters -- Dante, Leon and Master Chief -- with Luigi standing out and going into the next round with ease. add in the dumb rat, though? Luigi was screwed.

don't tell that to the first hour, though. Dante came out with the early lead, but Luigi came back and took the lead despite Pikachu doing a great job with 20% of the vote. Luigi build up a 200 vote lead during the opening hour, when Nintendo always does well.

the nighttime belongs to Dante though, and Dante took the lead back and built up a 1000 vote lead by morning. Luigi never really made the match any more interesting, either, and even the daytime couldn't save him. even when Pikachu finally got eliminated, he managed to take down one of Nintendo's main mascots along with him. 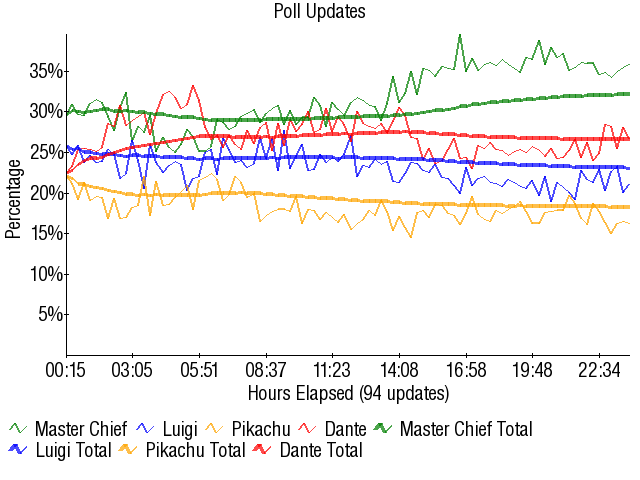 Retrieved from "https://board8.fandom.com/wiki/Master_Chief_vs_Luigi_vs_Pikachu_vs_Dante_2007?oldid=71255"
Community content is available under CC-BY-SA unless otherwise noted.