In round 1, Master Chief beat Yuna by 15% for first place, but the competition was PaRappa the Rapper and Tommy Vercetti. This round would be much more telling for his strength this contest, since Liquid and Alucard are far more important than those other two losers.

Needless to say, Chief delivered. Two stronger characters in third and fourth place, and he goes out and annihilates Yuna by 20% for first place. This was an absolutely dominant performance by the Chief, and showed he was right in his element this year. Hype for a new game, a format that helps him and a good path meant Chief could go really far. Yuna also had zero chance at all of surviving the divisional final.

The other odd thing about this match is go look at how far Liquid Snake got in 2008, then look at this match in a different tab or something. I still can't figure that one out.

was Master Chief for real? that was the main question going into this match. he put up a great show against Yuna and co. last round, but would he do it again?

MC answered that question with a resounding yes, and he was a lock to take division 5 at this point. even with increased expectations, MC went and outdid them by 8%. through two rounds, he was the star of the contest.

the rest of the match was disappointingly predictable, with the exception of Liquid - what the hell happened? a virtual tie with Alucard to losing by 9000 votes? just another display of how weird this contest was, I guess. Yuna has been stronger than Alucard for a couple years now, and while people questioned her "favourite" status (how many people actually care about Yuna?), she put up a decent performance here, better than her round 1 performance anyway. this round was all about Master Chief though, and he definitely delivered. 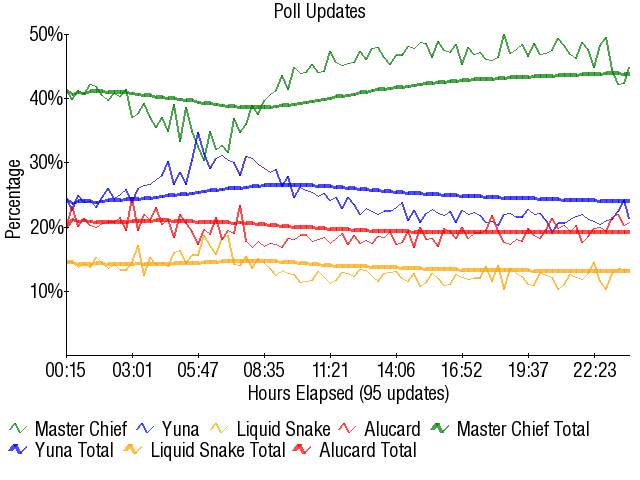 Retrieved from "https://board8.fandom.com/wiki/Master_Chief_vs_Yuna_vs_Liquid_Snake_vs_Alucard_2007?oldid=66448"
Community content is available under CC-BY-SA unless otherwise noted.