After what he had done last year against the combined forces of Ryu and Bowser (also with Toad I guess), Mewtwo was the easy favorite for first in this pack, and it seemed like Ness should be an easy second. In fact, the ease at which Ness was designated to place in this match was eerily reminiscent of Ocelot/Pac-Man 2k5, though there was at least a smattering of chatter because of that very fact.

Still, we were talking about two totally different scenarios, here. One match was straight-up affair, a niche character with a terrible blob of a picture going up against a guy as universally known as Mario. Ness, at least on GameFAQs, is every bit as well-known as Pac-Man, not to mention Pac-Man has fallen apart time and again against Nintendo icons. With the only non-Nintendo option being TRAVIS TOUCHDOWN, all Ness had to do was retain a fraction of his SSB luster and he would have had this one in the bag.

And thus the match began, and within seconds we learned the sad truth that Ness would fall apart against any SSB character not named Lucas. Ness got trounced by Pac-Man here. He ended up significantly closer to Travis Touchdown than he did to Pac-Man here. And the whole of the trio was made to look pathetic - Mewtwo was scoring over 40% of the vote on them here, and that statistic would only look more and more pitiful as the contest wore on.

Other than that, there really isn't anything to say - the favorite to place in this match ended up losing a plethora of updates to Travis Touchdown. The only real thing that stuns me is exactly how crazy high Pac-Man's prediction percentages were, especially his first place placing. The casuals didn't really seem to have much faith in Mewtwo, though we wouldn't see that sentiment justified until next round. 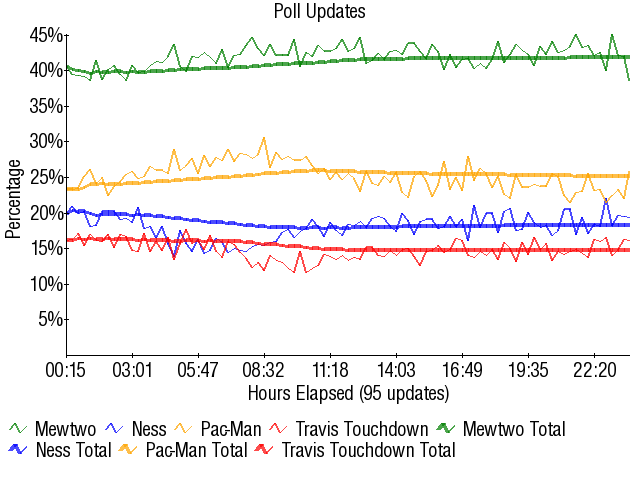 I doubt the flight from favorites does anything to hurt Mewtwo's showing in this next one, as there are probably plenty of casuals giving Ness and/or Pac-Man equally good chances of advancing into R2. Let's take a look at how things went last year for these three:

Just looking at the numbers, you'd have to call that a disappointing showing for this whole batch of characters. But Mewtwo has a good excuse- he got close to the worst draw imaginable, and the uproar that went out across this board when we first saw it was justifiable. Even against those long odds, Mewtwo put on a nice showing, especially with the ASV where he went on a pretty much awesome tear for a few hours, making some serious cuts on both Bowser and Ryu. There shouldn't be anything in this new group to hinder his ASV appeal either, and in fact I'd be shocked if any of these three hindered him at any time during the day to keep this from being a wire to wire runaway victory for the King of the Pokemon.

Pac-Man looked bad in '07, but again, he at least had a good excuse. The guy doesn't respond well to old school or iconic opposition, and considering Mario is the perfect example of both those qualities, we should have known he'd be in for a hurtin' come match day. Mewtwo didn't even arrive on the scene until '97 (and didn't hit it big until the first Pokemon movie in '99), and of course Ness wasn't even on gamers' radars until SSB in '99, and Travis is obviously extremely new, so I don't see any of these options having the old or iconic appeal needed to hold Pac back. He's also the only option for voters who don't want to support Nintendo, which is apparently on of the agenda for at least a decent number of voters this season. I really wanted Pac to get his classic sprite look for this match pic, but even with this colorful 3D version of himself I'm liking his chances to have a decent outing here.

Now, Ness also looked bad last time around, but unlike his co-contestants the Boy Wonder had no excuse. He was the lone Nintendo/Smash/"kiddie" option in a sea of mature PSX stars, and his failure to do ANYTHING with that huge advantage was one of the most baffling things about the entire Contest to me. Clearly his past 1v1 success was more a case of people being apathetic about or flat out disliking his previous opponents rather than people actually feeling strongly about Ness himself. However, you could say the same thing (and indeed many have) about Pac-Man. What's the difference? The difference is that there's an ELEPHANT in the way, and his name is Mewtwo. I doubt Mew kills Ness within the Smash fanbase, but honestly all he should need to do is tip the scales slightly, and that would be enough to give Pac-Man the advantage. I see it happening.

Travis will be fodder, but like Axel before him, he's that good kind of fodder that I don't at all mind seeing in 128 character brackets. Really cool character design, has the Sword Factor working overtime for him, and heck, even his name is hilarious. He probably could have done better in a group without other recent Nintendo options, but no biggie, I still see him having enough appeal to crack into the double digits without much problem. Anything too far beyond that is probably out of his range regardless of opponent.

So with Mewtwo a clear cut above the rest, Ness and Pac very close but the scales getting tipped in the favor of the old schooler, and Travis being able to avoid embarrassment, the end result has been potted and stirred and now I'll serve it to you.

Hm... not entirely comfortable with picking Mewtwo that high. But on the other hand, who's going to stop him?

Wow, awesome showing from Mewtwo in this one. As I said in my writeup I wasn't really seeing where any of the other three would be able to hold him back, so in retrospect I'm not sure why I didn't pick him for a little higher... too much Ness faith I suppose. This sets up a really cool grouping for R2- where is Midna going to fall in relation to a Pac-Man who should once again be running unhindered by icon SFF? Who wins the ASV between Mewtwo and Cloud? (Well Cloud still WINS during that time obviously, but I could see Mew having the Pokemon Power to make it his best time.) And given his horrible starting power, might we even see Mewtwo in the lead for a couple updates? Ha, now that would be funny! Of course the even bigger point is that now Mewtwo's set himself up beautifully for a run all the way through this division- if it's Squall and Sora advancing out of the top half you might as well make him a lock, but even if Yoshi gets into the group instead, who's to say the dino would be assured the heads up win between these two, given what we've seen the last three days?

Retrieved from "https://board8.fandom.com/wiki/Mewtwo_vs_Ness_vs_Pac-Man_vs_Travis_Touchdown_2008?oldid=67857"
Community content is available under CC-BY-SA unless otherwise noted.