This was our second to last match of round 1 involving a Noble Nine character. Their percentages in chronological order, just for reference:


It's not really meaningful, but it's cool how the percentages almost exactly line up their current order of strength. Link > Cloud > Mario > Snake > Sephiroth > Samus > Mega Man > Crono > Sonic is the order here, and you could probably switch Sonic and Crono around but not much else. And yeah, I do think Mario could take Snake or Seph heads-up. I was going to bring this up during Sonic's round 1 writeup, but Sub-Zero did well there so there's actually something else to talk about it.

As for this match, it went exactly as expected. Snake dominated, Rayman came in last and Nightmare easily won second place. A lot of Vyse fans made the argument about an absolute voting value or something, and how his fans wouldn't let him lose a close match, something to that effect. The problem there is people keep underestimating how many fans Soul Calibur has. Nightmare is probably the strongest character from that series not counting cameos from people like Link and Vader, most people picked the match as such and it played out that way. Not much else to say when a predictable match does what it's supposed to, really.

this match got a good amount of debate pre-contest - Snake was going to take most of the votes, but Vyse had a so-called "hardcore" fanbase that would not abandon him and honestly, who cares about Nightmare? this line of thinking gave Vyse a decent amount of bracket support from board 8 - not enough to be the favourite, but a respectable upset pick.

unfortunately, "cult" RPG characters pretty much bombed all contest while fighting game characters were one of the most successful groups. by the time this match rolled around, pretty much everyone expected Nightmare to take it, but not this easily - Vyse put up one of the biggest bombs of the entire contest. it was the final fall from grace from a guy who, once upon a time, was one of our most consistent performers. it seems that age has doomed him into anonymity. 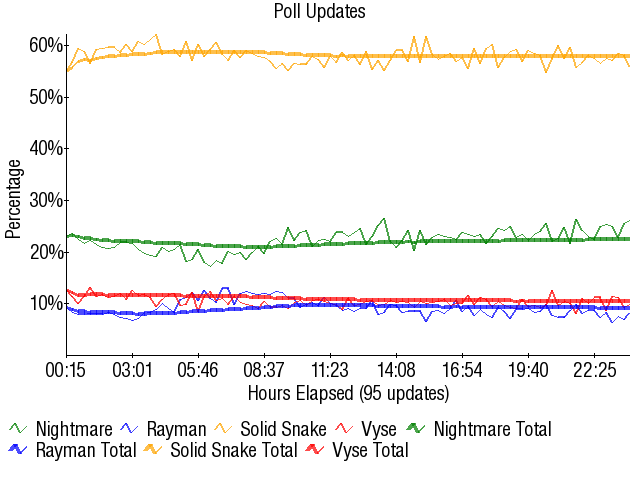 Retrieved from "https://board8.fandom.com/wiki/Nightmare_vs_Rayman_vs_Solid_Snake_vs_Vyse_2007?oldid=66243"
Community content is available under CC-BY-SA unless otherwise noted.