The Power Hour describes the first hour of a contest match. During that time, many characters get off to a hot start, while other characters do poorly during that time, only to make up for it later during the day. Characters with a good Power Hour vote often use that time to build up a large cushion. The "Hour" has never been an exact science - sometimes the character looks very good for up to three hours, while other times he barely gets any push beyond the initial board vote.

Characters and Their Power Hours Edit

This is not to say that Square in general does well during the Power Hour. On the contrary, the Power Hour hates 3D Square characters as much as it loves 2D ones. Characters such as Cloud, Sephiroth, or Squall are generally magnets for anti-votes, so they normally do poorly during this time when compared to the rest of the day.

Lastly, board favorites such as Solid Snake or Phoenix Wright have a great Power Hour. Snake, one of Board 8's favorite characters, manages to win the Power Hour against even Nintendo icons such as Bowser. The board also likes joke characters, such as Weighted Companion Cube, or CATS, who often fall hard after their strong Power Hour. This was especially true of L-Block, who overwhelmingly won the board vote in 2007. In the 2008 contest, after much the board began to dislike the Tetris piece, most of its Power Hour support began to die down.

The PHV In Action Edit

Link gets off to such a great start in the 2006 BR Championship that even though Cloud is going toe to toe with him by 4 AM, too much damage has been done in those opening hours and the match has been put out of reach. 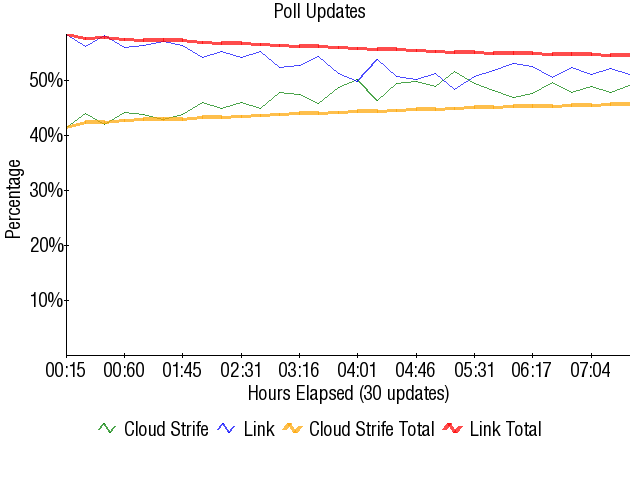 Retrieved from "https://board8.fandom.com/wiki/Power_Hour?oldid=61132"
Community content is available under CC-BY-SA unless otherwise noted.