The most important part of this match, of course, was with Leonhart stating that Snake would be possibly getting 43-45% in this match, and that said performance would be enough to put him up into the Mario/Samus tier of strength. Considering how the Noble Nine had performed this round and that most people thought that performance would be more appropriate for Sephiroth (hello), this prompted one stats topic pariah Black Turtle to state he would close his account right then if Snake pulled that off.

Thus Snake started off the match getting just that, BT reneged, and there was much rejoicing and gnashing of teeth by all.

And to move on to the less important, non-Solid Snake related part of the match - is there any point where the Oracle DOESN'T mechanically side with their brackets in a close match, even when the logic points against them? One of the reasons why I prefer the superior Analysis Crew, but no matter how you looked at the match it was set to be a three-way fight for second. Vivi had done exceedingly well on Snake last round, and Ryu H had upset Zero in a squeaker.

The arguments for each were pretty diverse. Ryu H's supporters believed that he was simply the stronger character this year due to Ninja Gaiden 2, and that Vivi would collapse when stronger competition appeared. Zero's believers relied on the belief that Ryu H's bomb in the second round against Riku after beating Riku and Roxas COMBINED was no fluke, and that something similar would happen here. Vivi fans knew he was going to stand out among three badasses, and combined with his great performance on Snake from the previous round he was the guy to beat.

Well, one thing definitely came true here - Ryu Hayabusa, whether it be because of his casual fanbase, disproportionately badass appeal, or just because of something really WEIRD apparently Hayabusa commits seppuku at the first sight of Solid Snake. And while the twitching corpse of the ninja was apparently still enough to give Riku the fight of his life last year, Zero and Vivi are on a different level. He ended up with 14%, and had to fight all day for it - still one of the oddest consistent anomalies in contest history, I say, but now we know it's absolutely true.

That left Vivi and Zero, and Zero took control of the match early due to his bracket support and trademarked powerful Mega Man Early Vote. But four hours in, the inevitable happened - as it always does - and Vivi took control of the match in a big way. By the morning he had shaved a 600 vote lead to practically nothing, and the during school vote allowed him to build a 400 vote lead of his own. It looked like Zero was going to drop ANOTHER match that he should have had in hand, but Vivi's historical troubles with the after school vote finally came back to haunt him. It was slow and painfully methodical, but Vivi's weakness during the ASV allowed Zero back into the match, slicing away with Vivi's lead, and Mega Man's nice second night vote pushed him over the top into a 400 vote victory.

Zero did what we expected to do in the end, but in the very worst way for the Mega Man franchise to look. Losing to a character you 63-37'd and barely beating Vivi due to what was probably the most favorable picture outcome he could have hoped for - and now he was going to potentially kill his series' flagship character next round. The stage was set for an epic showdown between Noble and Joke, the winner gaining a berth in the quarterfinals. 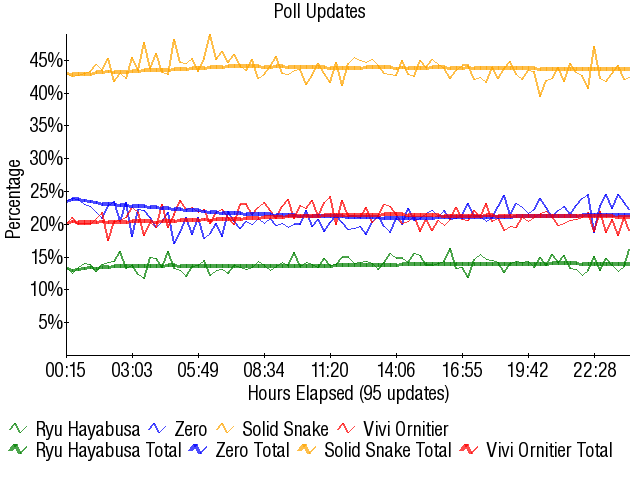 Time to discuss what could possibly turn into the greatest fatal threeway in Contest history!

Yes Vivi looked great, but I get the feeling that was largely anti-favoriteFAQs at work, in the same way that so many jumped off Vincent in favor of Falco back in R1. As with Vincent's match, I don't see that trend holding here for R2.

As I alluded to earlier, the last time Snake and Ryu went head to head, Solid came out of the match with 48% while Ryu couldn't even manage 19%. That was back when their competition was Riku and Nighmare; sub those two out for the stronger Zero and Vivi and Snake's percent is sure to come down, as will Ryu's... right? Well on the one hand the 360 has seemingly asserted itself and turned Ninja Gaiden into a better threat, especially with the ASV. But on the other, Snake figures to perform better than back in '07 himself, especially when drawing full MGS4 appeal with this picture, so shouldn't he more or less retain that ratio on Ryu? Not sure, but I've decided not to put much faith in the final result from round one and will be picking Hayabusa for a close last place in this one.

Zero's a bit of an odd duck. Sure he hemorrhaged up votes all through the Day and kind of embarrassed himself by giving Ryu the win, but how much of that underperformance needs to be tied back to the two Nintendo/Brawl characters who may have been holding him back? And if Ryu gets held back again by whatever killed him against Snake last time (badass SFF?), is Zero going to be immune? You'd think he'd have a larger hardcore fanbase than Ryu, since it would make sense for Hayabusa getting much of his appeal from looking like an awesome ninja. All things considered I like Zero to outlast the ninja this time around. But will it be enough for second? That all depends on...

Vivi! So cool to see him not wasted in this bracket, and sporting full-on Black Mage Factor in this pic, which is undoubtedly his biggest advantage. The more Snake dominates this match, the better Vivi's chances get I would think, as the Final Fantasy fanbase is probably the most dedicated of the three. He should also most likely do the best job of avoiding this "badass SFF" if that's really going to be a factor, as that's where Zero gets much of his appeal within the MM fanbase. All that considered... eh, I still don't feel good about backing him. Yes, he ought to have an excellent chance, but I keep coming back to that Falco result and others like it that we've seen in R2- just have this gut feeling that the bubble is going to burst against tough cookies like Ryu and Zero.

So in the end I'll say Snake with a good sized win (nothing like that '07 domination though) and then Zero just barely over Vivi just barely over Ryu. But I don't do so with much confidence! Let's stir the pot and find some numbers...

Awww man, what an awesome match. Ryu sure dropped the ball as far as the fatal threeway went (what the heck, Snake must just be that guy's kryptonite), but what a show Zero and Vivi have put on! When Zero got out to the big lead I wasn't sold- he'd done the same thing against Ryu before fading away, and Vivi figured to have the kind of huge night vote that we often see from FF8-9-10. But when it was four hours in and Zero not only had a huge lead but was still gaining, I threw in the towel on Vivi- no way you can come back from that without an MC-like day vote. Then I checked this aft and... Vivi was up by like 200, and gaining! I was amazed, but figured Zero could probably still take the ASV to pull out a narrow win. But then we were a full hour into what's usually the ASV, and Zero was doing nothing- still down a bunch, only going even, and since Vivi was sure to take the second night vote in any case, I threw in the towel on Zero. Then I got in from work an hour ago and... Zero back out to a big lead! This time around I'm holding on to my towel with a death grip; I've got no idea what to think anymore!

Retrieved from "https://board8.fandom.com/wiki/Ryu_Hayabusa_vs_Zero_vs_Solid_Snake_vs_Vivi_Ornitier_2008?oldid=67867"
Community content is available under CC-BY-SA unless otherwise noted.