Someone seriously needs to get Samus off of Frog. If you look back at contests, she's gotten to squash this guy three times -- once in a 1v1, twice in fourways. For all the good things Frog is able to pull off in contests, he cannot seem to get away from MOM. Yeah letting Team Ninja make a Metroid game was the worst idea since the USA taking its money off the gold standard.

Mostly a boring match, because we all knew what was going to happen in advance. Samus was going to crush, and Scorpion > Midna was a lock after Midna's round 1 stinkbomb. Add in Samus sucking away a lot of Nintendo votes, and Midna was doubly screwed. And since Axel isn't nearly as strong as Scorpion, this was easy.

Frog won the board vote because people like seeing Frog in contests doing Frog-like things, but Scorpion smashed him pretty easily after that and got second place by nearly 9000 votes. There was no way Scorpion would get through the next round with Samus and Mega Man in the same poll together, but this match was still a good throwback to the Summer 2002 days of HOW THE HELL IS SCORPION GETTING THIS FAR.

And with MK9 getting such crazy reviews, both he and Sub-Zero are slated for a pretty massive boost.

this was a nice little fourpack pre-contest - would the obviously strong Midna be able to resist Samus? would Samus hurt her enough for Frog to sneak in for the win?

of course, Scorpion came along in round 1 and ruined everything, and after Frog's near-loss in round 1 it was all but official: Scorpion was going to win this match. the Oracle predictions even show that there was an obvious second, third and fourth place, and it played out according to form here. there were a few people that were convinced Frog had some kind of miraculous comeback ability inside him that would allow him to pull it off, but most logical people went with Scorpion after seeing what happened in round 1, and the result was a fairly expected one.

maybe the most unexpected part of this match was the guaranteed part: Samus. 46% against these guys was damn impressive and Mega Man was going to need a hell of a performance to stop her. 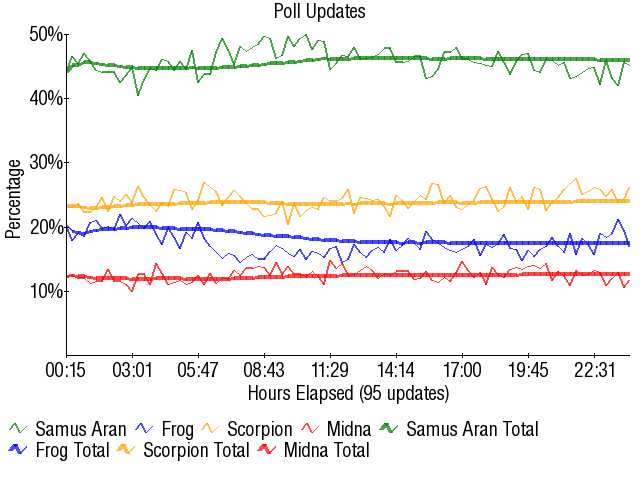 Retrieved from "https://board8.fandom.com/wiki/Samus_Aran_vs_Frog_vs_Scorpion_vs_Midna_2007?oldid=66379"
Community content is available under CC-BY-SA unless otherwise noted.