Someone has got to tell me when the VV disrespect is going to end. Only 35% had him escaping *this* division? (68% for SMAUS isn't exactly stellar, either) And it's nice to see some other Samus picture making an appearance, even if it's a photoshop. Picmakers have been positively petrified of changing her up much ever since that Tifa match. Now if only we could do something about that insufferable Vincent DoC model...

This was something we all knew was going to happen - Samus and Vincent advancing. What we weren't exactly sure on was the exact order. Samus is much more popular than Vincent here, but that gap closes a lot when you've got a weight like SFF bringing you down a couple dozen notches on the totem pole. And this wasn't just any SFF, now - this was Zelda. We'd seen Zelda herself cause MARIO to nearly lose to a carbon copy of the biggest has-been Noble Niner ever. We'd seen Midna *somehow* turn the once thought "unSFFable" God of Pokemon into the same fodderline level as she.

But the King of Evil is THE biggest leech Zelda has, and we all know it. Link proved it in 2004, and the cracks (along with a nice pic assist) came to fruition with a humiliation at the hands of Luigi in 2007. But still, a big Zelda leech is still ZELDA. And this was still Samus, she of the METROID pedigree. We'd seen Zelda herself put up nearly as much on Samus as Solid Snake did, surely Ganon could hold it together for a measly 20% or so?

Chyeah, right. Ganondorf started this match firmly behind Gordon Freeman, and simply never recovered. The once-biggest laughing stock of the entire contests finally got all the payback he wanted and then some, as for 24 glorious hours he cruised to an easy victory that was never really in question against the King of Evil. As for the 'dorf, he hit a new low, and has reversed some once unquestionable conventional wisdom - I'm pretty sure the majority of the board sides with Zelda in a match between the two now, directly and indirectly. Such is the fate of our (second) most touted Noble Nine breaker...

Oh, the ACTUAL match. Well, with Ganondorf's flop, Samus cruised along to a win that was closer than it should have been, but never in doubt. Vincent tried to do something during the night, but this was over in the first handful of minutes. The only thing to do was TRY to gauge this match in the face of the SFF being thrown around, and then see how Vincent was going to stack up for his Crono rematch. But of course, then there was L-Block, which kind of made it all feel fruitless...

(for one more day) 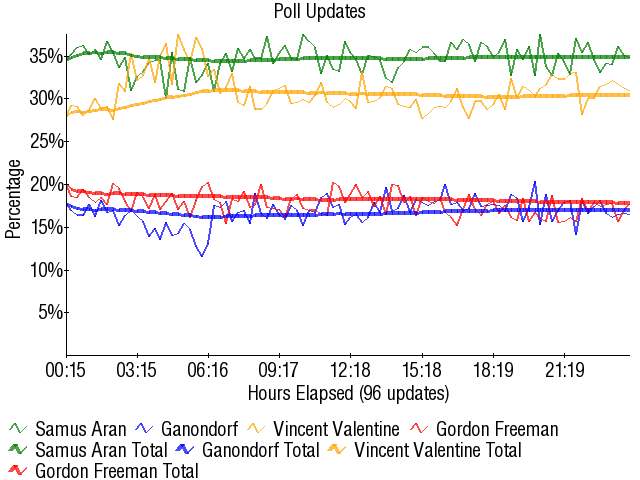 Let's move on to a brand new match where I'll be able to either... trust Nintendo, OR continue backing my bracket. Again. D'oh!

Look out Samus, Freeman's gunnin for you! But seriously folks... CT has clearly risen, so I don't buy Frog still being at the fodder line as he was last year, and Scorpion was very obviously a shadow of his former self in that matchup, so VV and GF need a solid drop. Even so, it's hard to argue that Valentine looked like the strongest character out of the group just based on their showings in that round.

Let's start with the Last Free Man. Kudos to him for a very surprising, very enjoyable run this season, but it ends here, and in fact I don't see any way for him to stay out of the basement. His more dedicated fanbase ought to allow him to outperform Duke's ~15% from the day before, and I'm expecting Nintendo fans to jump ship to Samus moreso this time around since she'll be trying to fight out Vincent, but there's no way she pushes Ganon down far enough for Gordon to give him a serious run. Then again, I've been betting against Freeman all season long, and look how well its worked out for me so far...

I still hold to the unpopular opinion that Ganon could give Vincent a decently interesting run for his money 1v1, but this format does wonders for fan favorites like Auron and VV and so the King of Evil would have no shot at second place tomorrow, even assuming Samus wouldn't be around to damage his Nintendo appeal. Oh well, better than going out looking like a total pig, '07-style!

The true battle is going to be between Samus and Vincent, and I think it will provide us with some real fireworks! Now I've been saying all season how good Samus is in this format, how she even held up well against Link, how she beat MM despite a major pic disadvantage, how her appealing design can keep her in matches even if the rest of the company is disappointing. So why would I bet against her now? The Legend of Zelda, that's why. In terms of intrinsic strength in this format, the gap between Mario and MMX is probably pretty similar to the one between Samus and Vincent. Yet when Mario (a guy many have called "The King of SFF") ran up against Zelda he ran up against an immovable object- the strength of the LoZ fanbase on this site refuses to let their series fold. Heck, even Cloud and Mewtwo found this out to some extent, and Midna is miles apart from Ganondorf!

That's why I see Samus being between a rock and a hard place in this one. New Square has looked very good, Vincent is going to bring the heat as soon as the Power Hour comes to a close, and she's going to need to start stealing percentage from the Zelda fanbase in order to not get buried during the overnight... which I don't think she can do. Ganon probably sticks a little above that 20% mark that Zelda clung to last time around, which means Samus is only going to be able to reach the low 30s, a position that will leave her very much in play for a guy with independent, NN-breaking strength like VV.

So if Vincent gets a large enough lead on Sammy during the dead hours to withstand her morning vote and come back for an SNV victory, and Ganon holds serve with the Zelda base and Gordon's strong base continues to stick with him, we'll see something close to *gets out the pot, stirs a bit*

RAGE. That's twice in a row where I've picked with my bracket instead of with my head. THIS time around, though, I'm placing the blame for my failure firmly on Ganon's head. This is SAMUS, not Mario or Link- how do you crumble to her like a total chump after watching Zelda and Midna hold up so well to better competition the last two rounds? If he'd just not made a complete fool of himself and pulled down the 21% that I wanted this match could have been right back into that tossup range where I felt good about taking a flier on Vince. Ugh.

In other news, what the junk Gordon- how do you fall from 24 to only 18 when swapping out Scorpion and Falco for Samus and Ganon? I knew your fanbase was hardcore, but that's just nuts!

Retrieved from "https://board8.fandom.com/wiki/Samus_Aran_vs_Ganondorf_vs_Vincent_Valentine_vs_Gordon_Freeman_2008?oldid=63203"
Community content is available under CC-BY-SA unless otherwise noted.