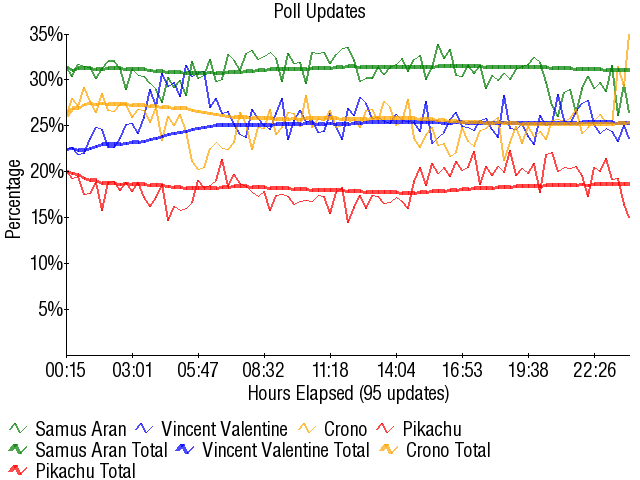 Oh my, we're in for a real slugfest just based on those numbers! However, it seemed fairly obvious that Gordon has had a nice boost since '07, so to keep those legit you'd have to push Sammy and Vince up at least a couple points... that puts Samus out of danger but fortunately moves VV directly into Crono's range. So here we go again!

As I'm sure everyone remembers, Crono jumped out to a very big lead on Vincent last season before giving it all back and then some to lose by 1.2%. Let's look at some pros and cons for Vincent here in '08:

...arg, can't decide! I was all set to back Crono for the upset, and with a decent bit of confidence, but then Pikachu shocked us by making it here and that swung my scale back into coin flip territory. I'm going to flip a coin and go with.... Crono, final answer! He just seems to be a touch stronger than last year, perhaps thanks to CTDS, and beyond that I expect Samus to limit the damage Vincent does to him thanks to her strong morning vote, while Pikachu limits Vincent's damage later in the match with his good ASV. Also, if it's a nailbiter in the final hour I don't see any way Crono loses, thanks to CT's "clutch" ability and how much the board vote despises Vince.

Second question is, if Pikachu goes crazy like last time, is there any chance that the Square boys could catch up to Samus? And my answer is... nay. During the euphoria of L-Block's demise I was considering this possibility, but now that my head is cleared I realize that even if Pika holds on better than Ganon (and he should- darn you, you stupid pig!), it probably wouldn't be by 5% like V or C would need. And even if it WAS by that much, don't forget that they're going to be dragging each other down in a dogfight all day. Given that I'd be shocked if Samus is ever not in first beyond the opening 90 minutes or so.

As to Pika, well, I'm expecting good things. He was in this position last year and did well, scoring 18 percent to Luigi's 23, so he seems a good bet to pull down about that much once again.

A comfortable Samus win, comfortable Pika last, and a down to the wire finish between the Square leads ought to result in something alot like... *pots, stirs, deliberates, and delivers*

That looks pretty wild... but heck, my bracket's dead, my Oracle is floundering, might as well go with my hunch for once!

Gah, how am I supposed to do a writeup when there's this epic Crono/Vince battle going on in the background? Currently VV is up about 150 with 2 hours left and it's anyone's ballgame... but in any case, good showing for Crono! He's going to end up having a much better showing directly against Vincent than last season, which is a decent justification for those of us who picked him based on CT:DS hype or lack of Link overlap or whatever else we came up with. Also a nice showing for Samus- will be interesting to see how much she can improve on her '05 outing against Mario in this next round, although I don't see a way for either of them to keep up with Crono/Vincent, considering Link's presence.

Retrieved from "https://board8.fandom.com/wiki/Samus_Aran_vs_Vincent_Valentine_vs_Crono_vs_Pikachu_2008?oldid=63197"
Community content is available under CC-BY-SA unless otherwise noted.