Sephiroth > Mario at the top was extremely predictable, making this one of the least interesting matches of the entire contest. It was also a terrible picture; only Sephiroth looked any good at all, which makes you laugh at the people who try bashing FF7's graphics. Mario kept it close for a few minutes, but ultimately the match went Sephiroth's way with ease.

Past those two, we had pure Sony fanbase versus pure Nintendo and all we learned is Sephiroth hurt Big Boss much less than Mario annihilated Fox. I know Link is the Nintendo kingpin, but Mario can get the benefits of SFF just as much.

Discussing the Mario > Sephiroth upset is always worth thinking about, even if Seph has completely dominated the series. Seph is trending down little by little each year. The next match this contest would have Link in it, so obviously Seph was going to advance there.

But just look at the numbers here:


43% for Mario and Fox. We're now in 2011, a year removed from Snake completely embarrassing Sephiroth in a 12 hour day match. IT'S FREAKING MARIO can't have possibly made up 7% over the past four years? It's definitely an upset worth thinking about if we ever see that match 1v1 again.

this match was, basically, five minutes of fun and 23:55 of boring. Sephiroth hasn't really had any notable matches because he's on a bit of an island - weaker than Cloud or Link, stronger than everyone else by a good amount. usually, his only interesting matches is when he underperforms.

his one positive over the years has been how he treats Mario like the Midgar Zolom. there's just something about Sephiroth that Mario folds to. 2003, he got utterly annihilated. 2005, Mario spent two months looking untouchable until Sephiroth started ramming him hard. come 2007, Mario had as good a shot as ever - the Wii came out, Mario Galaxy was coming out soon, NSMB, and Sephiroth was simply a year older and more irrelevant. Mario > Sephiroth was a cute little upset pick pre-contest that went largely undiscussed, but as the contest went on it was talked about a lot more. Mario's impressive round 1 match, combined with Sephiroth's perceived disappointment (he was up against CATS, and we know how percentages suffer when joke characters are involved), made it a reasonable pick.

round 2 pretty much ended any discussion of that when Sephiroth came out and took care of business. by the time the match rolled around, it was just a matter of how much Seph would win by. the only fun part was to see if Mario could hold the lead at the beginning -- and he did, for a short while. Sephiroth took it back and just crushed him overnight, though Mario did somewhat respectably when compared to previous efforts. this match wasn't very interesting, but I liked the buildup and always like seeing our strongest go at it, even if it's not the closest of matches.

the big disappointment for me in this match was Fox. argh, what a waste. nominate this guy next year, board 8. he deserves a legit shot, not a bunch of weak Nintendo characters followed by being put in a match with Mr. Nintendo himself. 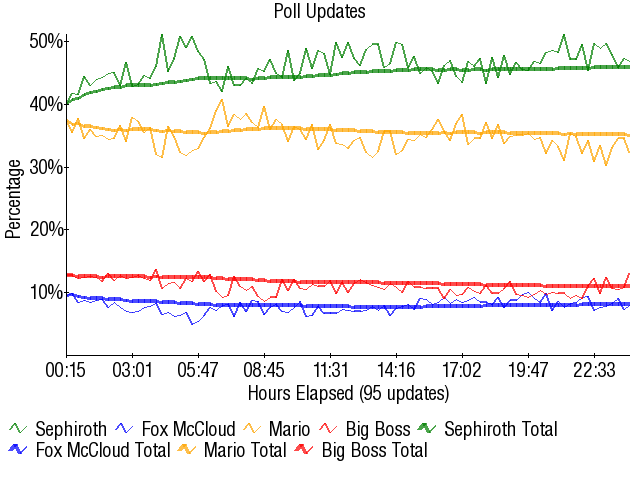 Retrieved from "https://board8.fandom.com/wiki/Sephiroth_vs_Fox_McCloud_vs_Mario_vs_Big_Boss_2007?oldid=66811"
Community content is available under CC-BY-SA unless otherwise noted.