Personally, Alucard has nothing on Sephiroth when it comes to odd performances, throwing matches and plans.

Mario spent two months owning the hell out of the main bracket and many debates took place about whether or not the winner could beat Sephiroth. And given that it looked like Samus had a great shot at it should she have made it this far, why couldn't Mario? After all, Nintendo boosted like hell in this contest.

But Sephiroth shut all of these theories up within minutes, because after Mario took the typical early lead on Sephiroth, Sephy proceeded to own the hell out of Mario. It wasn't just any owning either, because for a long time Mario was doing worse than what Bowser did in the Spring. In fact Mario had to rely on the morning vote to keep himself from falling below Bowser's percentage, and even though Mario made a percentage recovery he would go on to get the crap beaten out of him in a match that many felt he had a good chance at winning.

To put this in perspective, Mario won a total of ONE five minute update throughout the match. In this update, he took a grand total of four votes off of Sephiroth's lead. He also tied Sephiroth in another update. Mario did better during the standard Nintendo votes than he did at others, but all this match was was an extended beatdown that was slightly slower at parts.

All after Nintendo boosted like crazy, and if this match doesn't convince everyone that Advent Children made a difference nothing will. During this match, RPGuy noted that ~150,000 torrents of AC were on record as downloaded. And that's just torrents; other, more simple P2P programs were likely used to download the movie to hundreds of thousands of other people by the time this match came around as well.

But while AC made a clear difference for Cloud and Sephiroth (and possibly even Vincent), how many increases does the FF7 crew have left outside of a remake of FF7 itself? Time is running out, and an FF7 character needs to bring home another of these contests before the window of opportunity is closed for good. 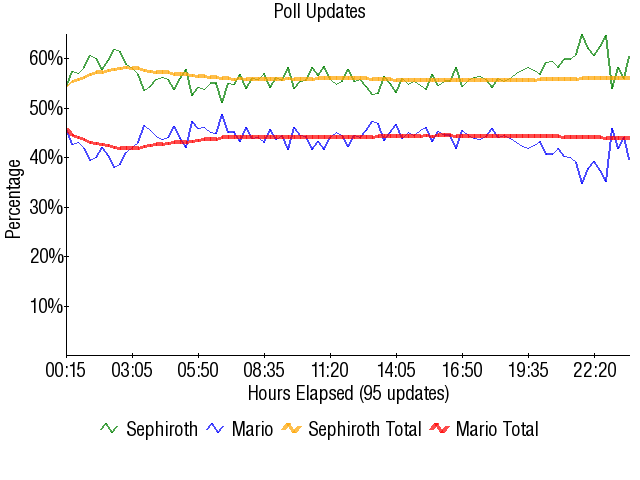 Retrieved from "https://board8.fandom.com/wiki/Sephiroth_vs_Mario_2005?oldid=54629"
Community content is available under CC-BY-SA unless otherwise noted.