This was our second straight boring quarterfinal match, since everyone knew going in Sephiroth would outdo Mario thanks to Link being in the poll. What was unexpected however was Mario holding his own for a bit. He didn't come close to being in second or anything, but the early parts of the poll were still pretty fun. Mario also clearly weakened Link in this poll, to the point where removing Vincent and adding in a non-Nintendo/Square character could have potentially allowed Sephiroth to sneak into first place.

This was the first time all contest where Link looked at all vulnerable, which gave the people who picked Cloud > Link in the final some hope.

what looked to be a boring quarterfinal match turned up with an unexpected twist: Mario. in 2006's battle royale, Mario got trashed by Link being in the poll, finishing a distant fifth and not doing all that much better than Samus. in this match, though, Mario stood up to Link early, went pretty even with Sephiroth despite Link being in the poll, and had a pretty impressive first hour. he fell off pretty hard after that, but there was some talk that he'd do as bad as Vincent Valentine, and that clearly didn't happen. 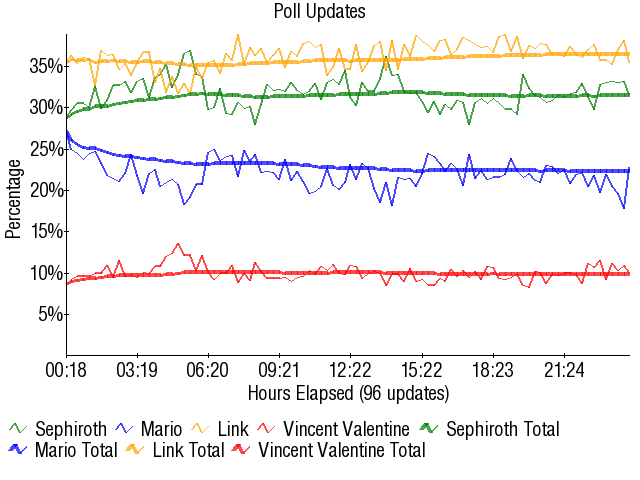 Retrieved from "https://board8.fandom.com/wiki/Sephiroth_vs_Mario_vs_Link_vs_Vincent_Valentine_2007?oldid=66880"
Community content is available under CC-BY-SA unless otherwise noted.