Of the four quarterfinal matches this contest, this was easily the most predictable of the bunch. Though given how exciting the other QF matches were, it was perhaps nice to have a breather after Vincent and Crono's epic third act.

Most people knew that Cloud and Snake were going to the advance here. Weighted Companion Cube and Mewtwo had deep runs this contest, but both of them more or less got lucky with bracket placement and advanced thanks to stronger characters sharing the same fanbase. Heck, we were 1000 votes away from seeing Midna escape from her division instead of Mewtwo.

As for Cloud, he would drop the board vote as usual before taking the lead for good at around the four minute mark. The FF7 lead would end up scoring 56.86% on Snake. A decent victory (and arguably the last good win Cloud has ever had in these contests), but with Sephiroth crashing the party next round, Cloud's performance was bound to weaken due to overlap. The upcoming Semi Final was a great opportunity for Snake to snatch the upset over GameFAQs #2 character.

And with Cloud and Snake joining Link, Mario, Samus and Crono in the Semis, surely we would be getting our first Noble Nine elite eight in four years. No way would a white-haired devil hunter or a dumb pink ball take down Sephiroth or Sonic, right? 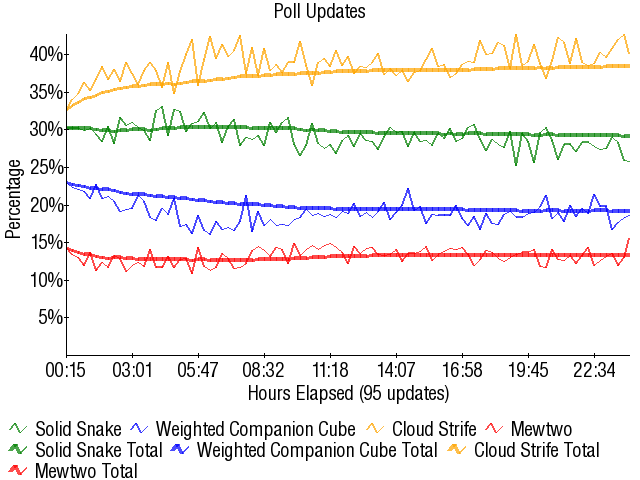 Now moving on to what should be the last kind of dull matchup of the season. Or at least it darn well BETTER be dull... *shakes fist at WCC*

What terrible terrible numbers! Mega Man's fate was sealed the moment Zero went and ruined everything by making that ASV comeback on Vivi, and it also left these x-stats fated to be awful. Not even the beastliest of MGS4/Brawl boosts could have pushed Snake above BL... and yet look at that, he STILL can't reach Cloud! That second set of numbers was of course destroyed by the triple Square SFF, which is likewise more or less impossible to adjust for. Oh well, moving on!

I took MGS4 boosted Steroid Snake to upset Cloud in the Final, but even *I* know that Solid isn't getting within CQCing range of Blonde Haired Zack without some major assistance from either Sephiroth or Vincent. As is, the only thing to keep an eye on is if Cloud can fire another shot across the bow by matching Link's percentage from earlier this round. 40% here would be hugely impressive, but I wouldn't put it past him.

Mewtwo had a nice run this season, but let's face it, that was mainly due to some very lucky placement and sliding by thanks to Fox making sure Yoshi wouldn't cut his legs out. After witnessing the ASV that Pika just pulled off against such respectable competition, I think we can put to bed the debate over who the strongest Pokemon is, at least in this format. I'd still like to see the two go head to head in a pure 1v1, but as is I don't see any way for Mew to come close to matching Pikachu's current percentage, and since he'd need to do so to have any shot of catching the Cube, a last place finish is just about a lock.

Speaking of WCC, let's check out his round by round progress. From 32% to 29% to not even 24%, ouch. And that was with hundreds of rallied votes and an ideal massive LFF setup, where it still barely managed to survive. There will be no such luck this time around; it's against three entirely independent characters who draw from three very powerful fanbases, and since it'll never be in the running against Snake no one's going to waste their time trying to rally for it. This is about as bad a situation as any joke could face, and as a result I'll be surprised if it can even manage to stay above 20%.

As for Snake, well, what's there to say? It would be really neat if he could hang around somewhat with Cloud, giving us some hope of the upset once Seph/VV come into play, but that doesn't seem very reasonable. Also would seem entirely insane (and infuriating!) if Cube ever challenged him. Staying within 10% or so of Cloud while 10% or so above WCC should be about right.

Cloud >> Snake >> Cube > Mewtwo... sure would be cool to see the Pokemon give him a run though! Sooo, that would work out to about... *pots and stirs up a heap 'o trouble*

That looks... not very good, somehow. Oh well, if I go down I want to go down hating on joke characters.

Hmm, well guess I'll try to get this writeup in before UFC 91 kicks off. Gooo Lesnar! Things went about as expected today, except that Snake did a touch better than I expected and Mewtwo surprised me by collapsing. I realized he wasn't going to have triple LFF working overtime for him like last round, but STILL, he was the only Nintendo option and a Pokemon to boot- I assumed that meant that, like Pikachu, you wouldn't fold to anyone outside of Zelda/SSB. Time to boot Mew to the curb and bring in Charizard as a replacement IMO! As for Snake, darn fine showing here, and I think it sets us up for something extremely interesting once Sephiroth comes to town next round. As long as Sonic doesn't cramp Snake's Nintendo appeal too much, we could really be in for something special there!

Retrieved from "https://board8.fandom.com/wiki/Solid_Snake_vs_Weighted_Companion_Cube_vs_Cloud_Strife_vs_Mewtwo_2008?oldid=76341"
Community content is available under CC-BY-SA unless otherwise noted.