This, to me, was probably one of the most enjoyable results of the contest. Partially because I had it in my bracket and argued the stew out of it, of course! - but also because of the validation that it meant for a character who has not only become one of my all time favorite characters, but a contest entrant who really deserved a chance to shine.

Auron has always been a character who has straddled the line between upper-midcarder and near-elite. Now after the release of KH2 he's firmly on the side of the latter, but before then he's had to suffer some tough draws. Knocking down fodder before getting fed to Cloud and Sephiroth in 2003 and 2004 is pretty rough, and he got his big chance against Ganondorf in 2005... only to let his Villains Contest high and The Boost send him to a humiliatingly easy loss.

Since then and the release of KH2, however, he's looked only better and better - pulling in a great number on Crono in 2006, and then a pair of dominating performances in 2007 before barely - barely - losing to Ryu in the face of Cloud SFF. Despite this, however, there have been some who have treated Auron like Dante - strong, sure, but never able to pull off a shocker against the big boys. Well, the writing was on the wall after his and Sonic's first round matches, and he would have absolutely no excuses if he wasn't able to pull the upset here.

And Sonic, having looked AWFUL ever since his upset victory of Crono back in 2006, finally saw his bad performances catch up with him as Auron easily fought off his bracket vote, pushed ahead in the Power Hour, and essentially never looked back en route to a match Sonic was never even remotely in. The hype for this match and the payoff are pretty much the only things of note in this match, because Sonic's efforts were BORING. Heck, watching Sandbag fail and end up getting clobbered by Sub-Zero were more entertaining than the hedgehog, as it really threw into perspective exactly how pitiful Magus had been in the previous round.

And with this result, a whole new line of conversation was opened - could Auron end up advancing AGAIN next round? Not too many entertained the idea, but Tifa holding up as well as she did last round gave some credence to the idea. It would have to be seen how well she would do the next day against Kratos. 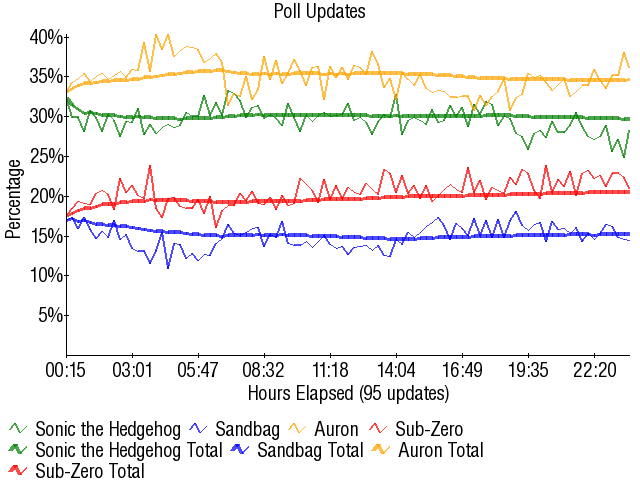 And now for maybe the most-discussed matchup of the round! Let's throw a couple hundred more words at it, shall we?

What terrible numbers! I guess I didn't want to base anything off that horrible showing by Magus last year, but it's clear Sonic and the Sandman should be way lower. Likewise you can't make a very good case for '08 Marcus... he was just not nearly the same character who surprised us a year ago, for some reason. With a fixed set you would surely see Auron entering the fray as a distinct favorite, I would think.

Let's start with ol' Sandy eyes. He appeared to have confirmed himself as the one joke character who was going to perform like a joke about an hour into his match- the early joke push had been there to an extent, but Magus was soon killing him, and it got especially nasty once the NPH was over. But wow, what an ASV he came up with! Fortunately for our sanity, I can't see anything like that taking place again in this one... Sonic will be there to help limit his morning, and then both Auron and Sub-Zero are guys with respectable strength all through the day; a Magus-like collapse from either would be just unheard of. Since he'll be against three guys with pretty unique fanbases, all of whom look great in the pic (while he's got about the most bland image imaginable), I can't see the Bag maintaining his joke base as well as WCC did the other day- a slip from 25 to around 22 or 21 should be more likely.

The bad new for Subby: even a Bag weakened that far will probably be too much for him to deal with. Yeah, the blue ninja held up well directly on Auron in R1, but I figure much of that is his ability soak of casual votes like a sponge, much like his partner in ninjadom, Hayabusa. Now that Sega fans and Smash fans have somewhere else to go with their votes, he probably loses a bit of ground versus Auron's more steadfast base, and as a result I have trouble seeing him stay out of the basement here.

Which of course means that the real battle should be Auron versus Sonic- and I think it's going to be a true slugfest! On the one hand Sonic is pretty obviously the character with the greater natural strength. On the other, his whole Team has been just dreadful in this format two years running, New Square has been consistently solid and seems to have improved somewhat for '08, and worst of all, he's going to be splitting much of his newfound Smash support with that bag of sand over there. Perhaps I should be more cautious... after all, Squall looked all-world in R1 as well, and that didn't stop him from getting brought way back down in earth a few days ago. But come on, Smilin' Squall versus Winkin' Auron- there's just no comparison! Plus there no option remotely like Sora in this bunch for those on-the-fence Square supporters.

Uh oh, not alot of time for tonight's writeup because I spent most of it doing an Oracle prediction of the upcoming election. So let me just quickly say, hoooray for Auron! So good to see him finally be given a chance to knock around fodder before getting bounced out by Cloud/Sephiroth... this time he got to knock around a Noble Niner before that happened! Also it's obviously awesome to see the weakening joke trend continue, as Sandy couldn't even manage a real ASV and is going to be punked easily by Subby in this one. I still don't have much hope for Pika over the Block, but after a showing like this I think MM > WCC once against becomes a good possibility, even with Zero trying to hold him back.

Retrieved from "https://board8.fandom.com/wiki/Sonic_the_Hedgehog_vs_Sandbag_vs_Auron_vs_Sub-Zero_2008?oldid=67871"
Community content is available under CC-BY-SA unless otherwise noted.