This match was close to 40/30/20/10, and you know what that means -- bad match. However despite the match being super boring to look at, some of the percentages were very surprising. Sonic was expected to crush this match and get at least 40% if not 50% like almost all the other Noble Nine characters this round, but here he couldn't manage that 40%. I'd love to say this is all Sub-Zero's doing, but the story of the demise of the Sonic series is well-known by now. People do not like Sonic the way they used to, and it shows.

Prince and Joe are also two characters people really want to like, but they'll never have anything really going for them in contests. They're weak and always will be, even with Joe's pending MvC3 boost.

The one silver lining of an easy final match in round 1 means I get to reflect a bit. Our first-ever fourway round was pretty decent, but all things considered it wasn't overly crazy. The elite characters are all going to do well regardless of format, and most of the upsets this round involved getting second place while a beast character took most of the votes up in first. I think only two matches had a true issue from 1st place to 3rd, and neither of them mattered in the grand scheme of things.

So all in all, round 1 was a mixed bag. The one lasting image for me were all the joke characters. Some did well, like L-Block and Mudkip, others did not. There was also the obvious issue of 128 characters getting into this thing creating a ton of fodder. The Prince of All Cosmos, Guybrush Threepwood and WHO IS HASEO don't really need to be taking up contest slots.

the last match of round 1 was another highly predictable result: Sonic in first, Sub-Zero in second, and they'd be advancing together in that order for at least two rounds. and that's exactly what happened - Sonic was never in danger and Sub-Zero nearly doubled third place.

but even though this was a highly boring affair, anyone who paid extra-close attention to the contests was fairly shocked by the result: how in the hell did Sub-Zero come so close to Sonic? this was the third strike against Sonic characters this contest - first Knuckles laid an egg, then Shadow laid a bigger one, and now Sonic couldn't even get 40% against a midcarder in Sub-Zero and two weaker guys in the Prince and Viewtiful Joe. it may have been the strongest fourpack for a Noble Niner, but this was still pretty disappointing.

an hour into this match, lots of people were calling for Sonic's head, several claiming he was the underdog in the semifinals vs. Master Chief. it was going to take something huge - say, an announcement in Smash Bros. Brawl - in order to rescue him from a Noble Nine-breaking loss. 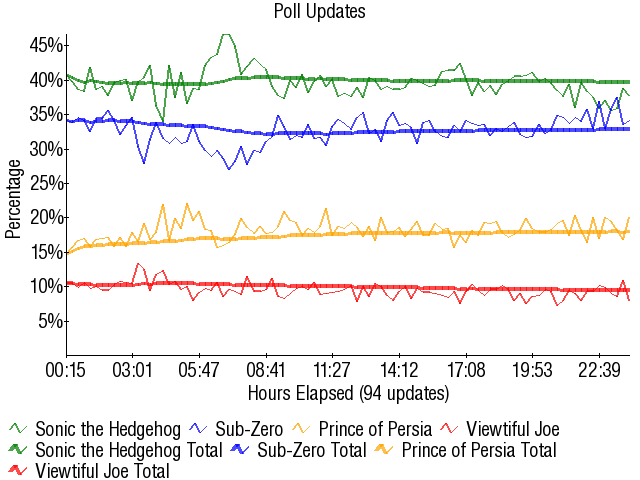 Retrieved from "https://board8.fandom.com/wiki/Sonic_the_Hedgehog_vs_Sub-Zero_vs_Prince_of_Persia_vs_Viewtiful_Joe_2007?oldid=66327"
Community content is available under CC-BY-SA unless otherwise noted.