Another match, another round of the Oracle goombas blindly trying to cling to their brackets. We know the story by now. Yoshi had just gone and put up one of the biggest bombs we've ever seen in these contests, letting Squall go out and tear him apart like he was the incarnation of Solid Snake himself. Not only that, but Sora had just put up a decisive win over Fox McCloud - perhaps with Chris too close for comfort, but we had seen Squall and Sora go two rounds with each other last year. Sora put up 39% against Squall in his worst showing, Yoshi had gotten 43% last round. How in the HELL was Yoshi supposed to beat the kid with Fox breathing down his neck?

The answer - one of the bigger beatdowns we've ever seen in these things. Yoshi got KILLED here. He ended up much closer to Fox McCloud, a character who gets the majority of his strength from SSB, than he did in even sniffing Sora. In fact, the match ended up being less Sora/Yoshi as it did Sora/Squall.

Whether you want to put it on Kingdom Hearts being more established or Squall's wacky pic where he's grinning like an idiot (I'd go with the latter, Squall killed Yoshi by more than Sora did Fox in the previous round), Sora was keeping pretty close with Squall, and despite being down by an insurmountable margin pretty much just walloped him during the day. The end margin between the two was less than 3000 votes, and considering that Sora had just gone out last year with a piddling 39% on the guy that's something you've really got to hand to him.

And more importantly, now with Yoshi out of the picture Mewtwo of all characters had seemingly received a free pass to the quarterfinals. There was some rambling on if Sora could avoid some Cloud SFF and make it a match - Squall was definitely going to get pasted - but it was pretty muted. Mewtwo had just been too impressive last round. 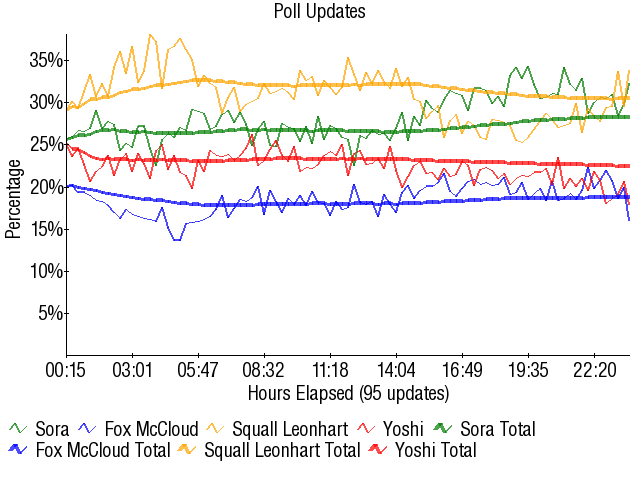 There's another potentially awesome match on the way for tonight!

Have to kind of hurry with this one as those last innings of the World Series (congrats Phils!) have put me a bit behind. Pre-Contest this was considered a pretty easy advancement for Squall and Yoshi, with the only question being what order they would go in. But after the way both Square guys dropped bombs on their Nintendo counterparts, all of a sudden Sora sneaking through here looks like at least a possibility, while it would take something truly crazy for Yoshi to pull the upset and finish first. A moment ago I was planning to predict Squall for a pretty easy win, Yoshi to advance but not with much room to spare ahead of Sora, and Fox to get SFF-pounded well out of contention. But now let's look at this pic...

Good heavens, what happened to you Squall!? For all the grief Tidus has taken over the years for looking like Meg Ryan, that's a MUCH worse look than anything the FFX lead has ever sported. Seriously, wow. Sora looks pretty goofy too, but he's at least saved by showing an anime look that seems to do pretty well with this GameFAQs crowd. Yoshi's pretty meh; not a bad picture for him but pretty generic. And Fox once again looks great! Of course I said the same last round and that didn't stop him getting beaten bloody... but yeah, I'd be very shocked if Yoshi was able to hurt him too badly with SFF when he comes out looking that good.

Soooo let's take those thoughts and throw something together quickly. Into the pot and stirred and what have we here...

That looks... really bad! But I have no time to correct it! Come on Fox, prove me right.

Oh wow... even with it busting up both my bracket and my Oracle, and with Sora being quite possibly my most hated Contest character, I can't help but laugh at this result. What the junk happened here? Well the way I see it, that picture happened. Everyone was calling for Leonheart's head the minute "Smilin' Squall" hit the presses, and as it turns out with good reason, but what we didn't stop to think was that this was actually the best possible situation for Square overall. Clearly this ridiculous look was a major turnoff to former Squall voters, but the trouble is, nearly all those "on the fence" voters ended up going with Sora! Yoshi finishing much closer to Squall doesn't do him a lick of good when all of the votes the #1 guy loses are going to the other option that he's ACTUALLY trying to compete against. Which meant Yoshi's only hope was to obliterate Fox, and... *looks at pic* nope, that wasn't going to be happening! The poor green guy was caught between a rock and a hard place in this one, and was never really going to have a chance given the circumstances. On the plus side, what an excellent validation for Fox fans this ended up being.

Retrieved from "https://board8.fandom.com/wiki/Sora_vs_Fox_McCloud_vs_Squall_Leonhart_vs_Yoshi_2008?oldid=67868"
Community content is available under CC-BY-SA unless otherwise noted.