Best factoid about this entire match is that Squall probably easily takes first place over Sonic without Sora getting in the way. There's proof of this, too, in a 2008 match where Squall was replaced with Auron and Sora was replaced with Sandbag.

For whatever reason, Sonic sucks in fourways. He's been trending way down thanks to how badly Sega has ruined him, but he gets especially exposed in fourways because people abandon him for a bag of chips. This is one of the worst first place performances ever. Because not only was Squall hanging with him for awhile even with Sora stealing a bunch of the Square votes, but Sonic needed the crazy Sega morning vote from all the brats to finish Squall off. That's just... bad.

There was some hype going into this match about how Sub-Zero could squeak into second place if Squall and Sora screwed each other over badly enough, but that lasted all of 10 seconds. As luck would have it, Sub-Zero's performance in round 1 was a complete fluke and his numbers in rounds 2 and 3 were more indicative of who he really was.

This match really makes me wonder what would happen if Sora and Aeris ever had a rematch. Sora is clearly stronger indirectly, but that guy just collapses like a house of cards against other Square characters.

going into this match, we had no idea what was going to happen.

for starters, we had Squall and Sora, two strong characters, sharing not only the same company, but the same game(s), too. the character that could capitalize on this was Sub-Zero, who had an impressive-as-hell round 1 but an awful round 2. god knows what would happen with him. and then there was Sonic, still riding the high of Brawl hype. Squall/Sora/Sub was reminiscent of the Bowser/Mewtwo/Ryu match, only there was a Sonic in the way this time.

the match started, and we soon found out what the anomaly was -- Sub-Zero was doing as well as he did in round 2. match over.. or so we thought.

Squall, somehow, was keeping pace with Sonic despite Sora being in the poll. split fanbase? it didn't matter. Sonic pushed his lead to 700 votes before Squall's night vote kicked in, and Squall actually brought Sonic to within 350 votes before morning hit. Sonic's killer day vote pushed the lead over 2,000 by the end, but Sora was in the poll -- what could possibly happen when Sora was eliminated?

combine this with the fact that Solid Snake and friggin' L-Block were going to be in the next match with them, and it was probably my most anticipated match of all time. 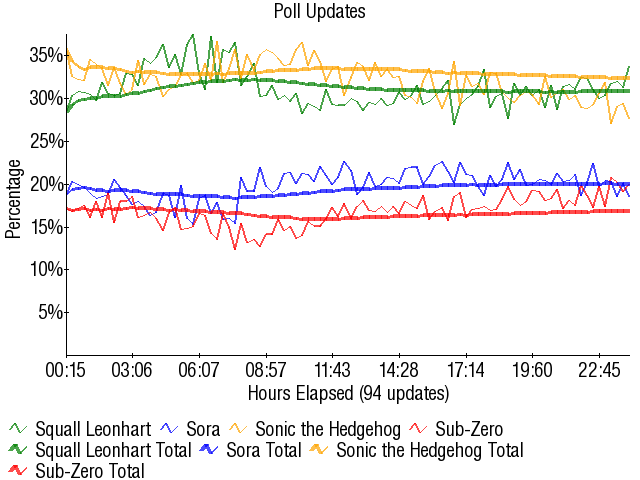 Retrieved from "https://board8.fandom.com/wiki/Squall_Leonhart_vs_Sora_vs_Sonic_the_Hedgehog_vs_Sub-Zero_2007?oldid=66877"
Community content is available under CC-BY-SA unless otherwise noted.