The threesome of the scientist, spectre, and Star Fox sidekick was probably the most split of the second round, and with good reason. Gordon had gotten scarily close to Scorpion last round, and the memory of Duke/Gordon II was still fresh in our minds. Most people were sticking with Scorpion out of bracket favoritism, but they weren't at all confident in it. Then throw Falco into the mix, who had gotten more on Vincent last round than Gordon got on Sora in 2006, and also the only Nintendo character in the match. The result you see is a tight Oracle spread that would have probably been dead tied if Scorpion wasn't such a massive bracket favorite here, and also a result that could potentially determine if an upset materialized next round.

Of course, as so many hyped matches do, it ended up anticlimactically. In this case, the result seemed to be determined before the match even began - the picture's release had the most HORRIBLE picture for Scorpion one could have possibly picked, and even though it's Scorpion - who doesn't know him? - immediately the bottom on confidence fell out on him, which means everything rested upon Falco to take down HL's protagonist.

And it didn't even come close to happening. Falco may have been the only Ninty character in the match - but he was still Ninty, and pretty much SSB ONLY Ninty at that. No one cares about Falco's role in Star Fox, no one cares about Falco, and it shows. The character that got 37% on Vincent last round ended up with 29% on him in a match tailor-made for him to overperform.

Seriously. I can't get over how exceedingly pathetic Falco was here, and to go on an Ulti-style tangent, it shows exactly how stupid Nintendo was for even letting him back into Brawl, to say nothing of Wolf. He shouldn't have even been in Melee, geez, I have a hard time believing Krystal doesn't hold up better here.

As for Scorpion, he went from a 2000 vote win to a 9000 vote blowout, and no amount of picture factor can explain that. Gordon had pulled the first major upset of his career, and did it in an epic style. All that was left was to see him in action against a SFFed Ganondorf for bragging rights.

Oh, and Vincent. Yeah, he dominated here, but it was comparable to Samus' win and Gordon, Scorpion, and Falco are no Ganondorf/Frog/Nightmare. Ganondorf would have to stay almost entirely proportional with Samus from round to round, and while that seemed unlikely, we'd seen what Zelda had done just recently. The match would just have to play out. 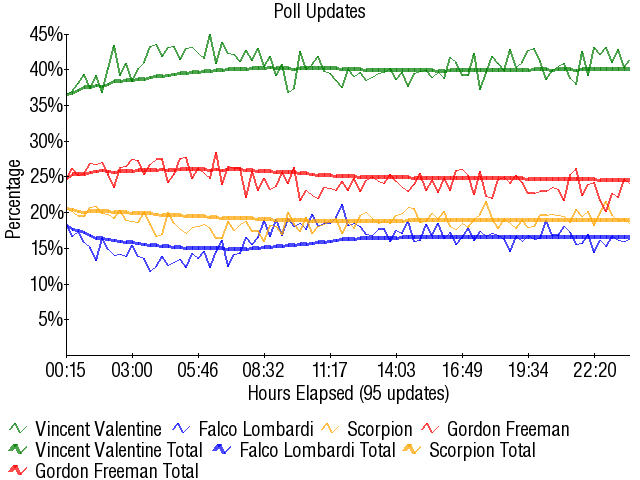 Can VV redeem himself from that underwhelming opening round performance? Can Falco prove that Nintendo is still a force to be reckoned with on this site, at least when it can avoid LFFing itself to death? Let's look closer.

I see no reason for that Wander number to be unreliable; he looked utterly pathetic last season and gave us more of the same in '08, without any good excuse for his underperformance in either case. Which means, whoa, was Falco ever impressive! I wouldn't think he could possibly be THAT close to Fox in strength, but the numbers don't lie... or DO they? Scorpion and Gordon better hope they do! There's no way both of those guys have fallen back to the fodder line; clearly Balthier performed a ton better this season than he did in his matches back in '07, for whatever reason. But even adjusting them upwards some, that's plenty of ground they'd need to make up on Falco- can they do so without any help from LFF?

That's the best thing about this match: it ought to give us a nice clear reading on all four of these characters, as we've got that rare poll between four unique fanbases where no one has any good excuse for not playing to their full potential. Let's start with Gordon... I've had this Freeman theory for a while which says that no one cares about HIM, but plenty of people do love all things Half-Life. That's why when he was just a zoomed out blob of a generic scientist in '02/'03/'04 he was beyond pathetic, but ever since he started getting these closer shots with the HL logo on his chest plainly in sight Gordon has suddenly become a decent low mid-carder. R1 was a perfect example of a "very good" Gordon pic... and just look at the result! This time around all we get is an ulta-zoomed (seriously SB, why the obsession with super closeups?) mug shot, and sorry, that tiny Half-Life style "A" isn't going to cut it. Much as I'll be rooting for the last Free Man, I can't see him finishing anywhere but last for this match.

Scorpion's a real oddball. Even accounting for Gordon's HL logo help and the boost he apparently received from the Orange Box, there was just no excuse for Scorpion to not put him away in that match, especially as he was sporting a full-on killer ninja pic that should have put him way over with the casuals. If people had finally just given up on the Mortal Kombat series I'd be able to understand it, but no, Sub-Zero looked like he hadn't missed a beat just last week, hanging in there with Auron and never letting his second place finish be in doubt. And then to lower my faith even further, Scorp gets THIS picture... good gracious! I know its almost Halloween, but even so I can't see skeletons being more popular than awesome harpoon-throwing ninjas. Definitely expect a dropoff in the casual support for a character who looks this way, and if that's the case he should just be concerned with beating out Freeman to avoid the cellar, not trying to advance!

As for the final two, I see Vincent taking advantage of the lessening of anti-favoriteFAQs and also the lack of a joke option in this poll (surely many voters knew he'd be fine last round and threw their vote to GlaDOS for the lulz) to put together the kind of showing we would expect from an NN-breaker. And Falco, well... call me crazy, but I still have plenty of faith in Nintendo. Yes, their inter-company SFF can be nasty, but let these characters lock horns with other independent entrants of about equal strength and I think that fans of the company will put them through to the next round 4 out of 5 times. I'm picturing a good early push for Gordon, Vincent to devour the percentage all through the overnight, and Falco to tear it up once the sun rises and put his second place finish away without too much trouble.

Sooo, yup, got to pick against my bracket here and bank on Nintendo and having the best pic of the bunch in support of Falco! Converting those words to numbers and stirring the pot results in:

That looks and smells just wonderful!

Ugh, darn you Falco! I guess I can't be upset at him for coming up short against Gordon- the guy is clearly just on steroids or something, and I'd never have expected a score like this out of him in a million years. But to not even save face by edging Scorpion despite a significant pic advantage and not having to deal with any LFF? All the faith I had left in Nintendo is quickly leaking out of my left ear.

Retrieved from "https://board8.fandom.com/wiki/Vincent_Valentine_vs_Falco_Lombardi_vs_Scorpion_vs_Gordon_Freeman_2008?oldid=67838"
Community content is available under CC-BY-SA unless otherwise noted.