So hey, remember this match?

One would think Mega Man would annihilate Yoshi yet again en route to Knuckles perhaps sneaking into second place, but then all the Sonic characters went out and sucked in round 1. Knuckles almost lost to Rikku with Vaan sharing the poll, and then the board vote for this match hit and Yoshi won it outright. Game over right from the start for Knuckles, who for whatever reason has been unable to get out of the second round in a single contest. Knuckles was even struggling with KOS-MOS for a little while before finally putting her away for an easy third place finish, but that was still a disappointment for him.

The final percentages here ultimately came close to 40/30/20/10, which shows you how good (See also: Boring) this match was. Pre-contest hype does not always translate to a good match.

Round 2 of a contest is often about the elites or near-elites smacking away characters of lower strength en route to deep contest runs, or characters that pulled off cute little round 1 upsets, and this was really no exception. By the end of the match, the only thing we had to discuss was the new match picture format for this round: Face shots.

this was a hotly debated match pre-contest. in 2005, Mega Man crushed Yoshi, and it was assumed that he would do the same. most agreed that Yoshi was stronger than Knuckles, but it wasn't by all that much - Mega Man being in the poll would surely hurt Yoshi, it was just a matter of if it would matter.

but then round 1 happened, and all argument ceased as Knuckles got blown out by Yoshi and nearly lost to Rikku despite Vaan being in the poll. to make it worse, other Sonic characters started doing poorly as well. by the time this match came around, the only shock was that Knuckles was doing somehow even worse than expected - he couldn't even separate from KOS-MOS for a while, and by the time his great day vote was over he still lost to Yoshi by 10000 votes. this was a match that would have been interesting had we not already seen the writing on the wall that Knuckles was going to bomb. 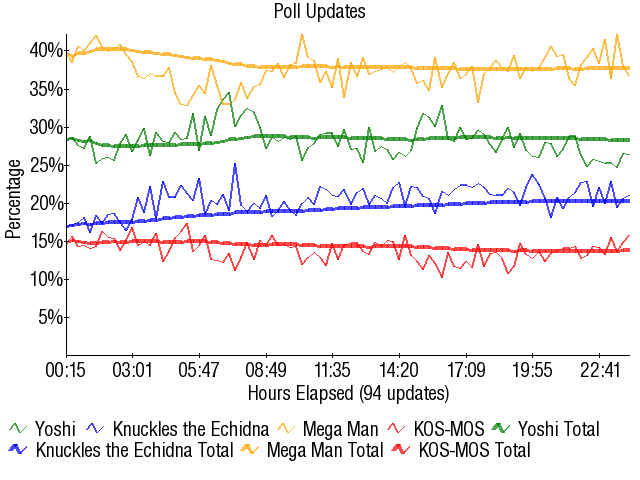 Retrieved from "https://board8.fandom.com/wiki/Yoshi_vs_Knuckles_the_Echidna_vs_Mega_Man_vs_KOS-MOS_2007?oldid=66396"
Community content is available under CC-BY-SA unless otherwise noted.