Zack Fair is a little-seen character from Final Fantasy VII who nevertheless is important to the game's storyline. He received a starring role in Crisis Core: Final Fantasy VII, an FF7 prequel that was released for the PSP in early 2008 and has sold roughly 1.5 million copies to date.

Hot on the heels of CC, Zack was nominated into the 2008 Character Battle, where his placement within a weak division set off a firestorm of controversy across Board 8, but especially in the Stats Topic. Some claimed that no character from a handheld has ever had Contest strength (aside from Pokemon of course) and that Zack would be no exception. Others claimed that Crisis Core had sold well enough to gain him some support, and that also FF7 fans would probably support anyone from that game, especially if they look like Cloud except with dark hair, and especially if they're wielding the Buster Sword. Zack quickly became the second biggest wildcard of the bracket (behind the infamous L-Block), with thoughts on his strength ranging anywhere from Cecil-level to Auron-level.

Since Zack's strength was likely going to be heavily reliant on how easily voters were able to recognize him as "that guy who looks like Cloud from FF7" and how visible his iconic Buster Sword was, Ngamer put together the following best estimates as to which picture Zack was going to receive in each round of the '08 bracket.

Round One - Full Body Shots Edit

Assuming SB sticks with his theme of full or mid-range body shots for all characters in Round One, here is the picture Zack will likely draw in his match against Wario, Cecil, and Jade Curtiss.

Result: Ngamer was correct- this was exactly the picture Zack drew for his round one matchup.

Assuming SB sticks with his 2007 theme for R2, here is the picture Zack will likely draw against Link, Shadow, and Wario. 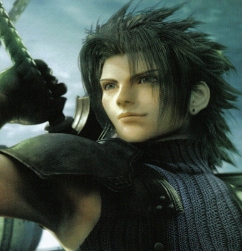 Result: Ng once again called this correctly- SB picked a closely cropped version of this face shot for Zack's round two battle.

Zack received mostly identical pictures for his third and fourth rounds. He finished third place in the fourth round, thereby failing to advance to R5.

Retrieved from "https://board8.fandom.com/wiki/Zack_Fair?oldid=84260"
Community content is available under CC-BY-SA unless otherwise noted.