And with that we entered our much anticipated second round, to ZackFAQs, and what would be the most anticipated match of his contest run - for different reasons than it was initially, to be sure. Zidane, for his part, wasn't supposed to be here, and aside from a few diehards rambling about him being having an exceptionally resilient fanbase,most figured that FF7 vs FFanything rarely turns out well for the latter entity.

This time, however, we were potentially looking at a completely different Zack. The picture theme for Round 2 was the customary close-up round, as most expected. And without the iconic Buster Sword taking up half of his picture this time, Zack was going to have to rely on his pretty mug to carry him through the battle. And since Zack is hardly the moody character that Cloud is, there's also the little matter of most of his pictures having him smiling happily at the camera. The only cheery FF protagonist we pretty much have is Zidane - and sheesh, look at him!

Then the match began - and Zack proved that he didn't need no dinky little sword to hold him up. Black-haired Cloud never let Zidane even believe he had a chance, blowing out both he and Wario (duh). But more importantly, he rode the momentum en route to putting up near 24% on Link with two 10%+ entities in the match. Those kinds of numbers on our #1 character are no joke, and in the span of two rounds Zack had come from being compared to the likes of Wario and Shadow to that of Tifa and Vincent. While it was clear (to me, at least) that he wasn't going to be near that strength, to be in that position at all is saying something. And while you might be able to argue Wario was holding back Link a tad, the same thing could be said of Zack and Zidane.

At any rate, it was going to take a monumental effort from one of the two characters that wasn't going to be SFFed by Link - if they even escaped next round - to stop Zack from escaping the division with ease. ZackFAQs was in full swing. 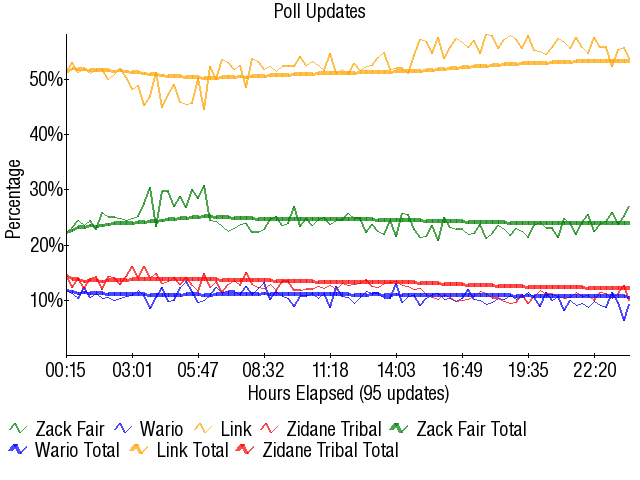 For tonight... oh shoot! I'm working on this Excel sheet with everyone's R1 results and preliminary x-stats that I wanted to break out starting tonight, but I don't have it handy at the moment. Guess I'll just have to wing it for this one and get that sheet rolling tomorrow night... but yeah, there's going to be a new format to my writeups starting soon. But for now, old format a'hoy!

I heard all the arguments for Zidane that were being tossed around in Stats last night- his fanbase is more hardcore than Zack's, that gives him the advantage when facing casual vote eating machine Link, or else maybe Zack was all Buster Sword last round and without it he'll come back down to earth. Eh, reasonable points, but Zack blew me away too much to give that upset any real consideration, sorry. ESPECIALLY after seeing what Rydia and Kain have been worth- even assuming Cecil's naturally the weakest of the three, it's got to take some serious appeal to pound FF4 anything into the ground like that this season. Zidane should have a decent enough showing, but I would be very surprised if he was ever in serious contention for advancement here.

As for the Nintendo side of this poll, there isn't really that much to say. Link ought to serve notice that he's still the class of the NN while owning Wario so hard that he'll never come within two miles of third place- not that he would have even outside of an SFF situation. As to where exactly Link falls, that's tough to say... but the 50% ballpark that most seem to be crediting him with seems about right.

So Link >> Zack > Zidane >> Wario ought to result in something along the lines of...

Bah, just can't justify Zack any higher, not with Zidane in the mix limiting his appeal... Oh well, come on BusterSwordFAQs!

Well would you look at that- one of the tournament's Elite characters has finally exceeded expectations! True, Link didn't blow us all away as he so often has in the past, but it seemed like the average pred I was seeing for him was right in that 49-52 range, and instead he's going to be finishing above 53 with ease. This goes along with my theory whereby "anti-favoriteFAQs" isn't going to be as big of a factor beyond the first round; it's not that people no longer LIKE Link/Seph/Snake etc etc, its just that after 7 straight years everyone is smart enough to know that they won't be threatened in the first round, and so its safe to throw their support to their second favorite character in the poll (Tifa, Falco, Zidane, or what have you). As we advance further into the bracket, though, a win from their favorites becomes less of a sure thing and so strengths should slowly return to more normal levels.

What remains to be seen is what kind of effect this trend will have on our joke characters- L-Block set the bar high with his momentum-gaining run to R6 last season, but I'm not at all convinced that he (or Bag or Cube) will be doing the same here in '08. They've already become entirely different animals by losing their "joke trends" and instead performing more or less like normal character of strength- maybe that's a sign that people were only supporting them out of disinterest in the other options, and as the field around them goes stronger they'll naturally weaken? Good gracious let's hope so!

Retrieved from "https://board8.fandom.com/wiki/Zack_Fair_vs_Wario_vs_Link_vs_Zidane_Tribal_2008?oldid=63161"
Community content is available under CC-BY-SA unless otherwise noted.